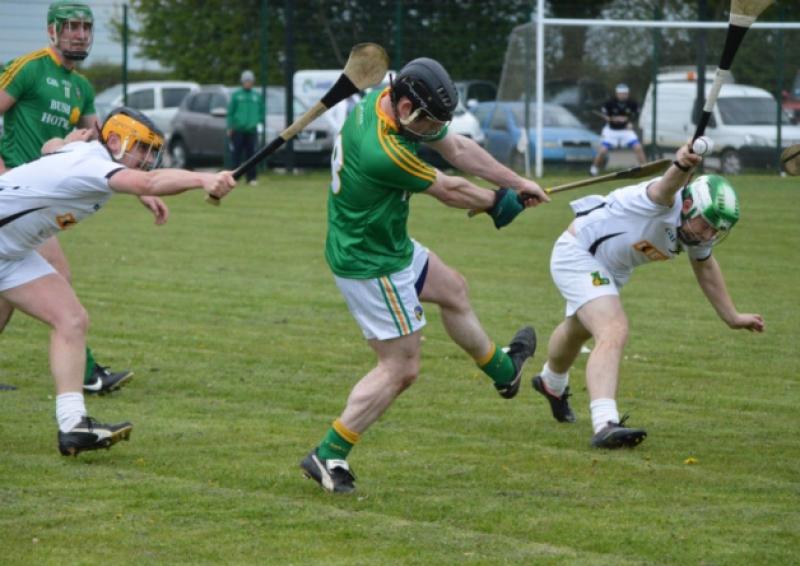 Although Leitrim had been reduced by the sending off of Colm Moreton, the away side made Warwickshire work extremely hard for everything they got and made sure they were never able to close the gap to less than the three points it was at the end.

The last time these teams met, Warwickshire secured their place in the Allianz Hurling League 3B final, a final they would go on to win, in dramatic fashion. Warwickshire were without the midfield pairing of Liam Reale and Padraig McCloskey who performed so well in that final once again. Paddy Hoey had a total of seven casualties.

Following their disappointing performance last week away to Fermanagh, the home side never looked in control as a mixture of ill discipline and the free taking of their opponents left Warwickshire behind for a large majority of the match as Leitrim played great hurling, recording a convincing win at Pairc na hEireann.

The match’s opening was even with Warwickshire opening their scoring with points from Emmet McCabe and Joseph Meagher. Padraig O’Donnell registered two early scores for the visitors (0-2 to 0-2).

However, a dangerous high tackle with the hurley from Shane Conlon got Warwickshire their first yellow card of the match, which set the tone for the rest of the half for the home side.

Leitrim played good hurling and their hard work was rewarded in the third minute as Padraig O’Donnell scored their first goal as the away side opened up a comfortable three point lead.

Warwickshire did get a point back with Sean Hennessy’s first score of the match, but O’Donnell followed his goal with a third point.

Paddy Hoey’s side were giving away too many cheap frees as Kieran Courtney received Warwickshire’s second yellow card after seven minutes. Leitrim took full advantage of the home side’s ill discipline with Zemnako Moradi scoring his first point of the match to extend Leitrim’s lead to four points at 1-4 to 0-3.

Warwickshire never looked comfortable in the first half and their ill discipline was preventing them from closing the gap. Emmet McCabe’s converted a free for his second point of the match, but Colm Moreton responded by scoring two points in succession to give Leitrim a healthy five-point lead as the first half approached the final stages, 1-6 to 0-4.

Kieran O’Leary’s high tackle gave the home side their third yellow card, much to the disgust of Paddy Hoey. As half-time approached, Warwickshire replaced an injured David Millea with Colm McBride.

McCabe’s fourth point of the match, as well as Colin Moran getting his first point reduced the home side‘s deficit.

However, they went down to 14 men in the closing stages of the half as Colm Moreton was sent off for a second yellow card much to the disgust of the Leitrim bench. Moreton was carded for kneeling on Dwayne Sheedy while the Warwickshire back was on the ground, although the Leitrim bench protested he fell on Sheedy.

It wasn’t enough for Warwickshire to close the gap as the away side took a comfortable five point gap in at half-time at 1-10 to 0-8. With the numerical advantage, maybe they could turn it around.

As the second half commenced, Leitrim kept their composure scoring with John Ryan and Padraig O’Donnell as the gap increased to seven points at 1-12 to 0-8.

It looked like it was the victory was going to be sealed for the away side, but Warwickshire sprung into life in the last remaining minutes of the match.

Both sides exchanged points with Padraig O’Donnell and Warwickshire’s Sean Hennessy and Emmet McCabe scoring in successive minutes. Despite the numerical advantage, Warwickshire were struggling to close the gap.

However, Warwickshire’s only goal came through Colin Moran, who closed the gap to four points at 1-11 to 1-15. However, it wasn’t enough to avoid defeat to a well organised and defensive Leitrim side who kept possession well.

Tale of the match

Man of the Match: Padraig O’Donnell was in great form throughout the game as he capitalised on Warwickshire’s poor defence and discipline to score most of their points and Leitrim’s only goal. He was the man of the match ahead of Zemnako Moradi. From the start, he made sure that Warwickshire’s ill-discipline and concession of frees was punished with most of the points and the only goal. He was able to keep his cool and score when the team needed it, following some scrappy play

Score of the Match: Sean Hennessy scored four in the home side’s defeat against Leitrim, but his point after a neat lay off from former Clare hurler John Reddan in the middle of the second half helped bring Warwickshire back into the contest, but it wasn’t enough to stop what was a disappointing performance from Paddy Hoey’s team and their second loss in two matches.

Save of the Match: Michael Cremin produced a great save in the middle of the second half. Cremin’s reflexes helped to ensure that Leitrim didn’t get their second goal, which would have killed Warwickshire‘s attempts fight back.