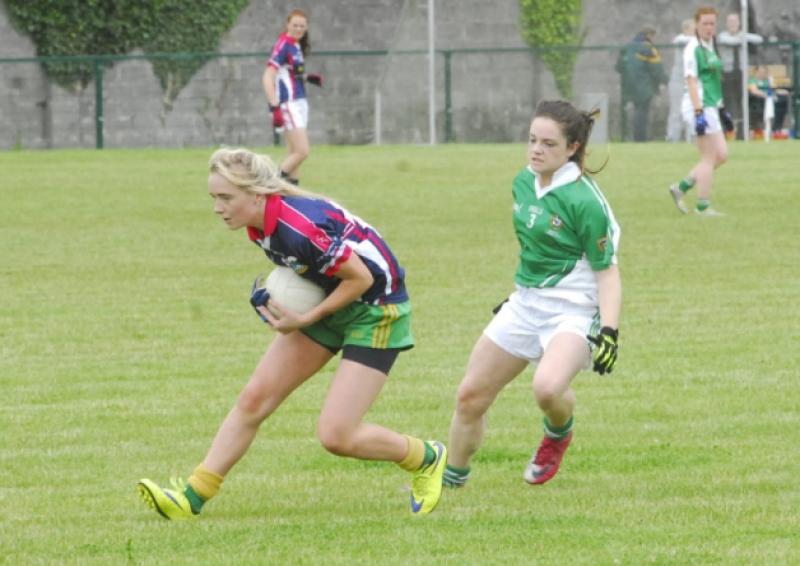 In a thrilling encounter, county star Roisin McHugh converted a last minute free to snatch a draw in a high scoring and free-flowing encounter where a draw would probably have been a fair result.

Yet last year’s Intermediate Championship showed real determination as they fought back twice to retake the lead against a powerful Mohill side who had the heartbreak of missing an injury time free that would have ensured a share of the spoils.

Oughteragh got off to a perfect start with three points from Mary McNulty, Laura O’Dowd and Emma McGovern in the first five minutes before Mohill keeper Kathy Keegan made a good save from a free while Oughteragh’s Laura Bohan prevented a certain goal after a high ball broke behind the keeper.

Eilish O’Dowd pointed after a short fifty but Mohill were right back in the game after Kiara Keegan’s long range shot flew just too high for the keeper to end up in the net. Laura O’Dowd responded with Orlaith Gordon scoring a great point after a great run.

McNulty and Keegan swapped points before O’Dowd fired over and Leighanne Flynn dramatically goaled after Sarah McLoughlin dispossesed a defender.

Mohill responded in style with three great Keegan points from play before another long range shot, this time from Gordon, ended up flying into the Oughteragh net to leave Mohill 2-5 to 1-7 in front at the halftime break.

Oughteragh opened with points from Leighanne Flynn and Roisin McHugh putting them back in frotn aftersix minutes but Mohill hit back with two points from Keegan and Claire Beirne before Deirdre Ward pointed from 30 yards after Ciara O’Dowd made a good save from Keegan.

But just as Mohill were taking control, Oughteragh hit back with a great goal from Sarah McLoughlin after a one-two with Laura O’Dowd but barely had the cheers died down and Mohill struck for their third goal, Ellie Gordon driving the ball home after a rebound came off the keeper.

Still Oughteragh fought back, McLoughlin pointing before Roisin McHugh goaled at the second time of asking after a save from Kathy Keegan to put them two up.

Mohill again fought back, two surging runs from Aisling McNabola saw her fire over two great points to tie the scores before a brilliant point from Orlaith Gordon put them in front with six minutes to go.

Back came Oughteragh with Mary McNulty scoring a great point under immense pressure before Oughteragh won a late free with Roisin McHugh striking over the winner. Mohill had one late chance to draw but with nobody eager to take the free, Orlaith Gordon stepped up but her effort fell short and Oughteragh held on.