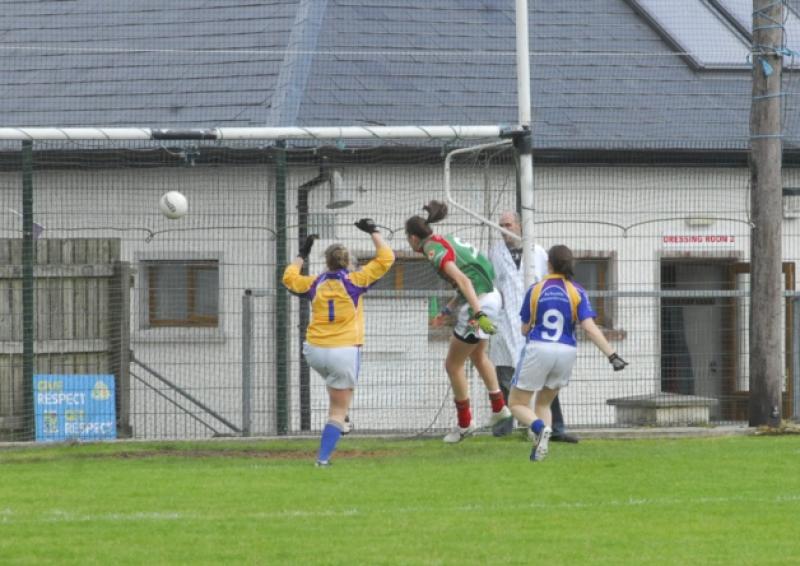 Aughawillan opened the scoring when Aileen Maguire converted a fourth minute free which was cancelled out moments later by Michelle Guckian.

Aughawillan looked strong in the early stages of the contest and deservedly opened up a lead when Aileen Maguire scored two frees either side of a Mary McKeon point.

Kiltubrid looked to stem the tide of pressure and the ever-reliable Aine Tighe reduced the deficit to a point when she converted a 13th minute free and just a minute later she pounced for the game’s opening goal. Emma Guckian squared for Tighe who rose to dispatch the ball to the goal.

Aughawillan were afforded an opportunity to get straight back in contention with a penalty but Aileen Maguire’s effort was off target.

Carla LaGuen pointed to level matters shortly afterwards but Kiltubrid hit back with Michelle Guckian on target to leave just the minimum between the sides.

With three minutes of the half remaining Kiltubrid edged in front when Aine Tighe converted a free and moments later she struck for her second goal of the game.

Tighe could only watch as Maeve Quinn made a fine save to deny Michelle Guckain but Aine Tighe was quickest to react and blasted the rebound to the Aughawillan goal.

There was a setback on the stroke of half time for Kiltubrid when Sinead Tighe was yellow carded but leading 2-4 to 0-6 at the interval Kiltubrid had reason to be pleased.

Kiltubrid made light of the numerical disadvantage when the game resumed with Aine Tighe forcing a fine save from Maeve Quinn moments after the throw-in but two minutes later, she completed her hat-trick with a shot from distance.

Points followed from Aoife Byrne and Michelle Guckian as Aughawillan struggled to make an impression on the second half.

Aileen Maguire helped reignite Aughawillan’s challenge when her short free was played back to her and she slotted the ball between the uprights.

That was quickly followed by a Grainne McGlade point but just when it appeared as though Aughawillan were building up a head of steam they were dealt a blow when Sinead Quinn was issued with a yellow card.

Aileen Maguire and Aine Tighe both converted frees before Kiltubrid struck for their fourth goal. Siobhan Kelly raced on to a flick from Michelle Guckian and struck for goal. Maeve Quinn did get a hand to the ball but she was unable to prevent the ball finding the back of the net.

Just when it appeared as though Kiltubrid were on course for victory they were once again reduced to 14 players when Ciara McWeeney was issued with a yellow card and not long afterwards they conceded a second penalty.

However, all assoicated with Kiltubrid were able to breath a sigh of relief as Aileen Maguire was off target with her effort and that was to signal the end of the Aughawillan challenge as Kiltubrid did more than enough to close out the final quarter of the game and ensure a winning start to their campaign.