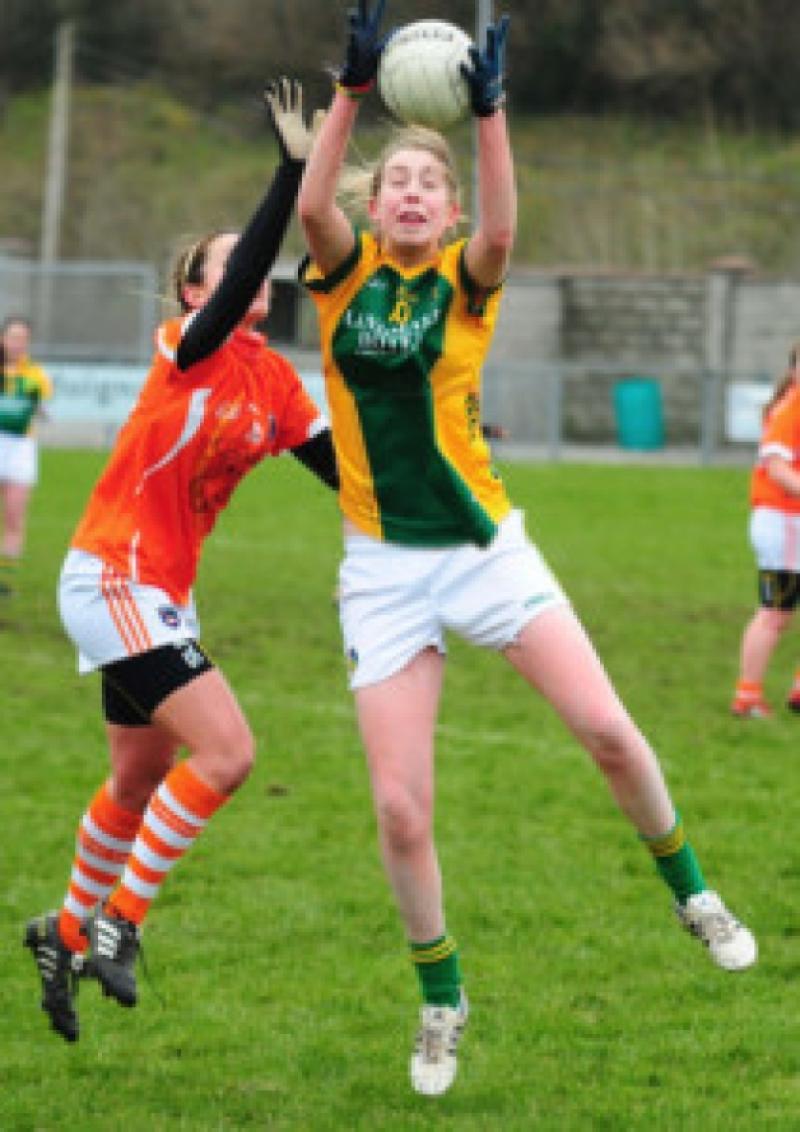 Leitrim Ladies undefeated run in the Tesco Home Grown Ladies Division 3 came to a halt at a cold and wintery Pairc Sheain Ui Eslin, Ballinamore last Sunday as a physically stronger Armagh took the verdict and top sport in the division after an absorbing encounter.

Leitrim Ladies undefeated run in the Tesco Home Grown Ladies Division 3 came to a halt at a cold and wintery Pairc Sheain Ui Eslin, Ballinamore last Sunday as a physically stronger Armagh took the verdict and top sport in the division after an absorbing encounter.

The ability to break through tackles and a strong physical presence down the middle of the field gave the Armagh visitors the verdict in a game that truly could have gone Leitrim’s way had either of two goal chances, one in each half, gone their way.

The first came in the last minute of normal time in the first half when Roisin Fowley saw a lovely curling shot crack off the base of the Armagh post and rebound clear to safety while in the second half, Aine Heslin saw a shot saved at point-blank range just seconds after an Aine Tighe goal had tied the scores.

But when the pressure came on, it was Armagh who had the physical strength to shut down the lighter Leitrim attack and strike on the break with the impressive Fionnuala McKenna doing all the damage with a personal tally of 1-7 on the day.

On a ferociously cold and icy day, it was McKenna who maintained the best icy calm as she converted three frees in the final ten minutes to secure victory for the visitors, her display capping off a strong showing by the Orchard County who also had top performances from Niamh Marley and Caroline O’Hanlon.

Yet the game was not without positives for the Ladies team, despite their first defeat of the campaign – Armagh were definitely a step-up in terms of the opposition Leitrim faced so far this year and for the majority of this contest, the home side did not look out of place at all.

Leitrim showed a lot of spirit, worked extremely hard and were just without that little bit of luck that might have carried them to victory.

Perhaps an over-reliance on the talents of Aine Tighe might be stiffling the team as, when well marshalled as she was last Sunday, Tighe’s influence can be curbed somewhat and the knock-on effect to Leitrim’s confidence is quite stark, understandable given the huge importance the Kiltubrid player carries for this team.

The Ladies team still lie second in the table and are well placed to make the Divisional Semi-Finals but face two huge tests against Longford next Sunday and Down the following weekend, two teams that are also in with a strong chance of making the competitions semi-finals.

The pressure is definitely building as teams get closer to the championship and the business end of the League with four or five teams of considerably higher standard that the rest of the teams in the Division.

Longford had an observer at the game and will have noted the reliance on Aine Tighe – he will also have noted that Roisin Fowley caused a lot of problems in the first half but the supply into the Dromahair corner-forward inexplicably dried up in the second half.

Enya McWeeney did well at full-back, Sharon Kerrigan was lively and Kirby Gilgunn, Sinead Fowley and Deirdre Ward worked their socks off.

Fionnuala McKenna opened her and Armagh’s account with first minute free but as Armagh struggled to make early dominance show on the scoreboard, Leitrim levelled when an isolated Roisin Fowley did well to fashion a nice point for herself on nine minutes.

With the biting cold and strong cross-field wind proving very difficult for both teams to counter, both teams had a litany of wides, Aine Tighe (3), Deirdre Ward and Erin Farrell missing chances as Armagh also had four missed chances.

Leitrim went in front with six minutes left in the half when good work from Erin Farrell and Deirdre Ward ended with Roisin Fowley putting over a good point. However, less than a minute later, Armagh struck for their goal when Fionnuala McKenna got away with what looked like too many steps, burst clear of the Leitrim cover and drilled a low shot to the Leitrim net.

Clodagh McCann did well to work her way through Leitrim cover to score but it was Leitrim who missed chances, Erin Farrell seeing a shot drop short before an isolated Roisin Fowley again worked a good chance, her curling shot from 20 yards beating the keeper but hitting the post and rebounding clear in the last minute of normal time.

In added time, Erin Farrell and McKenna swapped points as Armagh led 1-3 to 0-3 at the break, a lead quickly extended with a second minute Caroline O’Hanlon free.

Leitrim hit back with their most productive spell of the game – Aine Tighe converted a free before a great ball over the top of the Armagh defence saw the Kiltubrid player gather well, dummy a defender and drill the ball to the net to tie the scores after ten minutes.

Leitrim should have gone in front a minute later when another ball over the top found Tighe but as she was bottled up, she got the ball to Aine Heslin in front of the goal but the Armagh keeper advanced smartly to block the Leitrim player’s shot.

That proved crucial as McKenna surged through a minute later to point with a goal on before adding another from play three minutes later. Leitrim hit back with an Aine Tighe free after 17 minutes but it was Leitrim’s last score of the game as Armagh closed down the Leitrim attack very effectively.

With Armagh playing on the break and closing down Leitrim’s lines of attack, those attacking breaks were very effective as McKenna converted three frees in a five minute spell.

Leitrim were never able to get the glimpse of the goal they needed and the game ended on a worrying note when Mairead Stenson went down after a heavy collision – true to form, Stenson tried to play on but almost collapsed and had to come off.