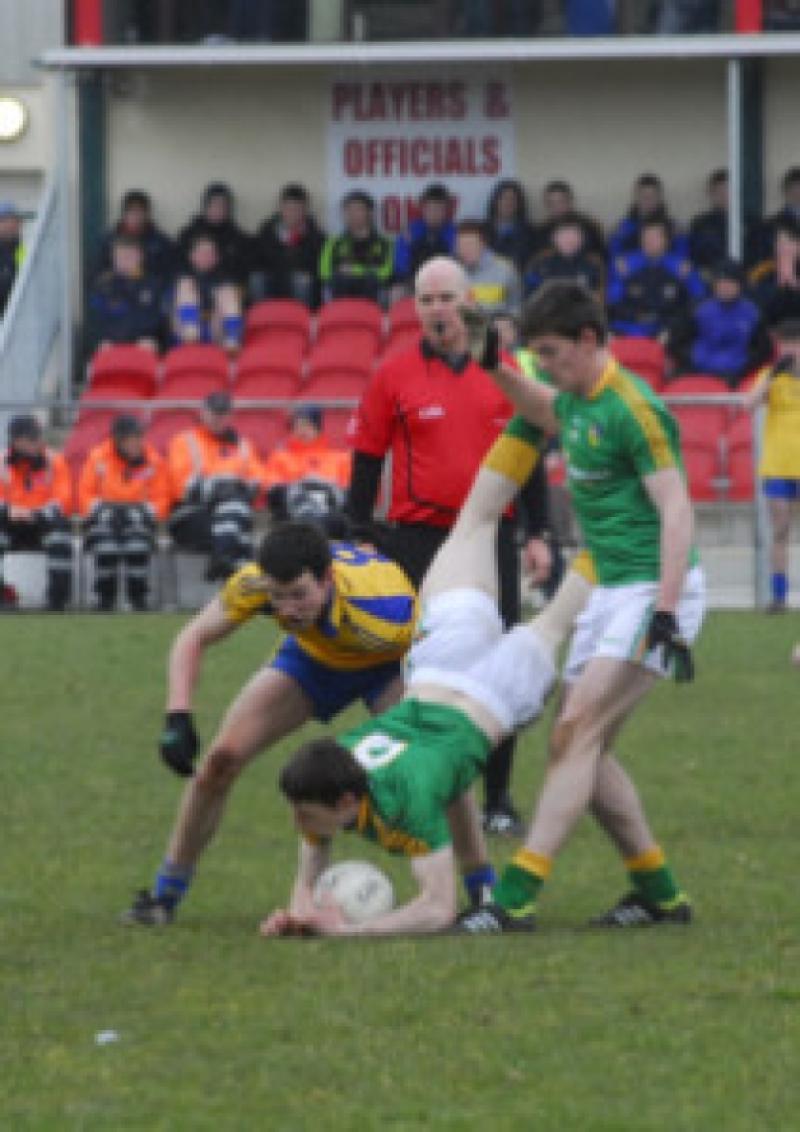 The scoreline may indicate that last Saturday’s Connacht Minor League encounter in Kiltoom was won relatively easily by the home side but Leitrim certainly played their part in what was a competitive encounter.

The scoreline may indicate that last Saturday’s Connacht Minor League encounter in Kiltoom was won relatively easily by the home side but Leitrim certainly played their part in what was a competitive encounter.

Leitrim trailed by just a point with 12 minutes of the game remaining and it was Roscommon’s ability to finish both halves strongly that ultimately ensured they emerged victorious.

Having secured a dramatic draw with Sligo, hopes were high that Leitrim would be able to continue where they had left off. Having been very influential against Sligo, Michael Clancy was moved to wing forward where it was hoped he would have a significant impact but in what was a relatively flat first half Leitrim performance, neither Clancy or any of his team mates truly asserted themselves on the game.

With the wind at their backs in the second half Leitrim were considerably better but the challenge ultimately faded away just as an eight point lead had all been wiped out.

Not only did Roscommon finish the game strongly, they were also out of the blocks very quickly as John Gannon opened the scoring just 10 seconds after throw-in.

Luke Murphy converted a free after a foul on Michael Clancy but it was Roscommon who were looking the more assured although the game was eight minutes old before they regained the lead when the excellent Diarmuid Murtagh converted a free.

With almost 11 minutes played the home side struck for the game’s opening goal. Michael Murtagh found corner forward Henry Walsh who struck emphatically past keeper Darren Kenny who was left flat footed by the powerful shot.

Within two minutes Roscommon had almost struck for their second goal as Tadhg O’Rourke delivered an accurate ball to find Walsh but on this occasion he was denied by the Leitrim post.

That certainly produced a reaction from Leitrim and after a number of efforts went wide, Murphy (free) and Conor Gaffney struck to leave just two points between the sides with 10 minutes of the half remaining.

But it was Roscommon who would finish the half the stronger and three points from Diarmuid Murtagh (one free) meant the momentum was back with the home side. Diarmuid Murtagh’s impact on the game was decisive and Leitrim’s inability to nullify the threat he posed meant a long towards ensuring victory for Roscommon.

Cathal McCauley put a brief halt to the Roscommon scoring when he converted a free but the first half scoring was to be concluded by yet another Diarmuid Murtagh point and a Walsh converted a free to give his side a 1-7 to 0-4 lead at half time.

Despite the fact that Roscommon extended their lead with two Murtagh points, Leitrim were much brighter after the restart as they played with an energy that suggested they believed the game was not yet gone from them. The comeback began when Cathal McCauley converted a free six minutes in and after the introduction of Aaron McLoughlin and Dean Brolly, Leitrim looked dangerous every time they attacked.

Further points from the ever reliable Mark Plunkett and McCauley (free) meant there was now five points between the sides but with the momentum now with Leitrim, the game was very much in the balance.

There was an a element of fortune surrounding Leitrim’s goal when it arrived midway through the second half and all of a sudden there was just two points between the sides. Cathal McCauley’s free from a tight angle to the right of the Roscommon goal appeared to be on course for a straight forward point as it soared to a huge height after leaving his boot.

However, when the ball stopped climbing it descended goalward at a staggering pace and deceived everybody as it dropped just under the crossbar. In fact it wasn’t until the green was raised that everybody could agree on whether or not it was a goal that had been scored.

Three minutes later the deficit was reduced to the bare minimum as Conor Gaffney reacted quickest to slot the ball over the bar after McCauley’s free came back off the post.