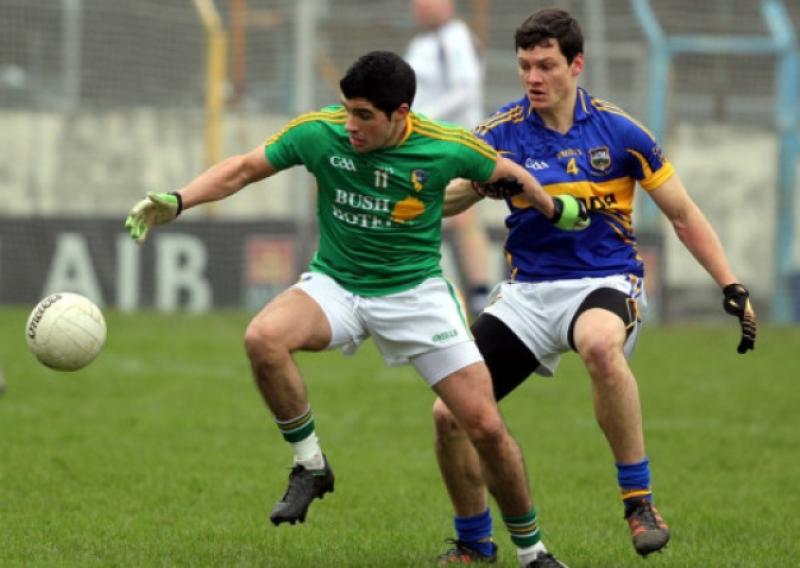 Leitrim’s hopes of figuring in the promotion shake-up in division 4 of the Allianz National Football league, ended in deep disappointment at Semple Stadium, Thurles on Sunday, where they were out-played by a slicker home combination who were not flattered by their seven points winning margin.

Leitrim’s hopes of figuring in the promotion shake-up in division 4 of the Allianz National Football league, ended in deep disappointment at Semple Stadium, Thurles on Sunday, where they were out-played by a slicker home combination who were not flattered by their seven points winning margin.

Both sides needed to win to stay in the race but Leitrim manager Brian Breen acknowledged afterwards that his men could not cope with the movement, and interchanging of the Tipperary forwards. “It was all over after fifteen minutes”, he said.

Not quite, but at that stage Tipperary were 1-5 to 0-1 ahead and might have had another goal had Alan Moloney not dragged his shot wide of Brendan Flynn’s post in the fourth minute, spurning a great goal chance.

The Tipp attack was carving the Leitrim defence open thanks to the quality ball being provided from outfield. A goal was inevitable and it came in the 8th minute when Brian Fox delivered to Michael Quinlivan whose dummy set up Barry Grogan for a classic strike.

Leitrim were struggling to find a rhythm. Gerry Hickey had their opening point in the 7th minute but they were on the back foot as the Tipp attacks came in waves. Leitrim enjoyed a productive spell from the 16th to the 23rd minutes when points by Conor Beirne and Emlyn Mulligan (2) narrowed the gap to four points but the flourish was short-lived as Tipperary regained control.

This was when the game was really lost, as Tipperary added 1-5 without reply in the last eight minutes of the half, their goal, again by Grogan, coming on the stroke of half-time.

Down 0-4 to 2-10, even the most optimistic Leitrim man in the paltry 351 attendance, could not have held out much hope for the second half, although the help of the fresh breeze would be considerable. However, there was no immediate sign of improvement as Tipperary scored the first three points of the half in five minutes and could have had another goal had Robbie Costigan put away a simple chance in the 37th minute.

Sub Sean McWeeney who had come on at the interval, had Leitrim’s first score of the half in the 44th minute, and the Beirnes, Conor and Tomas, added further points as Leitrim sought to salvage some pride.

At 12 points adrift, there was really no hope of catching the home side but to Leitrim’s credit they stuck to their guns, a further brace of Mulligan points leaving them 0-9 to 2-14 behind in the 54th minute.

It might be said that Tipperary had taken their foot off the pedal by now, but certainly Leitrim began to get seriously into the game.

Emlyn Mulligan, well policed until now by Tipperary’s Munster player, Ciaran McDonald, found space to exert his influence on play, and in an encouraging finish to the game, Leitrim shot the last five points, two from Mulligan, and one each from Ray Cox, Paul Brennan and Colm Clarke.

Too little, too late, perhaps, but yet an indication of the potential of this Leitrim combination.

And so the promotion charge is over, though Leitrim have one game remaining against London. They will now be hoping to use that game as part of their build-up to the opening round of the championship in which they play New York.

Brian Breen was offering no excuses for the defeat afterwards. “It was all over after fifteen minutes. Tipperary were moving very well. We could not cope with the inter-changing of their forwards with Grogan and Moloney causing us a lot of problems in the inside line of attack. Their work-rate was superior to ours also.

“We were coming down to win. We felt it was a long shot to our qualifying but a win would have brought the promotion issue down to the last game. We came down the night before to be properly prepared but Tipperary’s pace blew us away. I was very impressed with Tipperary. They were the best we have met this year.”

So what now for Leitrim? Breen said – “We have a final league game against London before our championship clash with New York. We will now have to sit down and focus on the championship.”

Certainly this encounter will have given Leitrim food for thought, with the need to intensify their application on the field an obvious shortcoming. They did not work as hard as Tipperary, did not move with the same fluency, and while their defence was seriously exposed at times, much of the trouble was coming from outfield where Tipperary dominated and were afforded the space to create chances.

Emlyn Mulligan carried much of the attacking hopes of Leitrim but he was starved of an adequate supply of ball, and only stamped his authority on the game in the latter stages.

It was left to such as Paul Brennan to show the determination and leadership that was required with Tomas Beirne, Brendan Brennan, Ray Cox and Conor Beirne, others to catch the eye.

Tipperary manager, Peter Creedon, said afterwards that his side had been brilliant in the first half but he was disappointed with the second half showing. “Promotion is all down to our game against Offaly on Sunday week. That could be a winner takes all clash,” he added.

Leitrim’s final game sees them take on London in Pairc Sean Mac Diarmada on Sunday week, April 7, a game that has added significance as it will be exactly four weeks away from the New York Championship game - it will be the last chance for players to impress Brian Breen and George Dugdale in competitive action so while there is little to play for, New York will be very much to the fore while London will also want to send out a message ahead of their meeting with Sligo at the end of June.