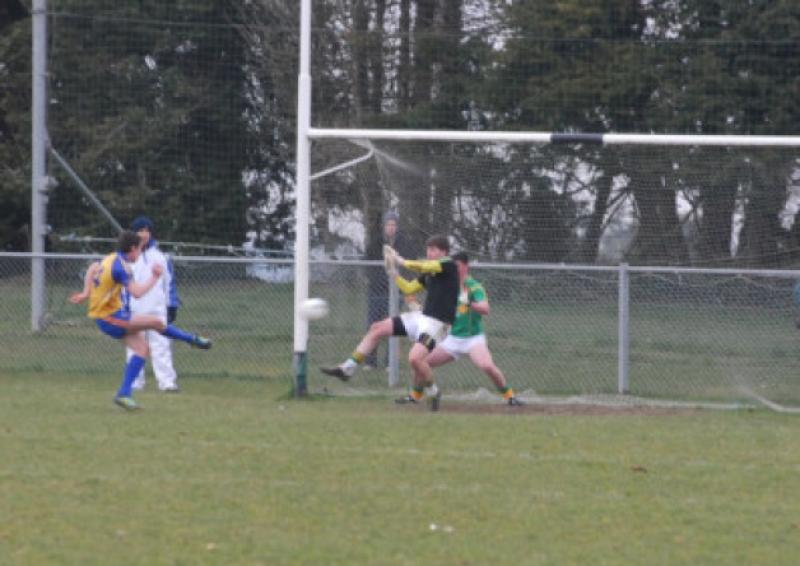 Approaching 6pm in Kiltoom on Saturday evening last, the few remaining Leitrim supporters were to be found scratching their heads wondering how the Leitrim U-21s had managed to perform so poorly in the opening half of the Cadbury’s Connacht Championship semi-final against Roscommon in Kiltoom.

Approaching 6pm in Kiltoom on Saturday evening last, the few remaining Leitrim supporters were to be found scratching their heads wondering how the Leitrim U-21s had managed to perform so poorly in the opening half of the Cadbury’s Connacht Championship semi-final against Roscommon in Kiltoom.

The opening 30 minutes saw Roscommon build a lead that was guaranteed to lead them to victory but to further compound the frustration of the Leitrim supporters, the team in green and gold were by far the better team in the second half.

Leaving Kiltoom and heading back for Leitrim those Leitrim supporters had little to savour but another one of the dreaded moral victories where pride had been restored but ultimately victory had gone to the opponent. Looking for answers as to where it went so horribly wrong for Leitrim it was evident from an early stage that the intensity being brought to the game by the Roscommon players wasn’t matched by their Leitrim counterparts and the midfield battle was comprehensively won by Roscommon.

With Leitrim’s record at this level so disappointing - they haven’t won a game since 1998 - a good start was always going to be important but in fact it was the exact opposite that happened as the home side struck for a goal just 15 seconds after the throw-in. The Leitrim defence was hesitant at best as Finbarr Cregg ran unchallenged before squaring the ball to Colin Compton who had the easy task of finding the Leitrim goal from close range.

With the Leitrim players evidently shocked by what had just happened Roscommon came within inches of a second goal and the game was still less than 60 seconds old. Ciaran Murtagh certainly went for goal but his effort went just over Brendan Flynn’s goal.

A further Colin Compton point extended the lead before Leitrim began to show some signs of life as three Shane Moran pointed frees brought the visitors back into contention.

Unfortunately that was not to signal the beginning of a comeback as Roscommon continued to look capable of scoring every time they advanced into the Leitrim half of the pitch. Corner back David Murray added to his sides tally before Cian Connolly pointed to increase the Roscommon lead to four points approaching the midway point in the opening half.

Leitrim’s best moment of the game up to that point saw Shane Quinn embark on a run into Roscommon territory and when he picked out Keith Boyle a goal seemed inevitable. However, Boyle’s strike was denied by an excellent block from Roscommon full-back Ross Timothy and the resulting 45, taken by Donal Wrynn, dropped short.

That proved to be a pivotal moment in the game as with 10 minutes of the half remaining Roscommon made the Leitrim defence look decidedly ordinary twice in the space of a minute as Cian Connolly and Colin Compton both found the Leitrim goal.

A Thomas Corcoran pointed free was cancelled out by Leitrim’s first score from play as Micheal McWeeney struck after a fine passing move that saw Leitrim work the ball out of defence and when it fell to McWeeney, the Aughnasheelin man confidently dispatched his shot between the uprights.

Unfortunately for Leitrim there was to be a further sting in the tail before the interval as Roscommon struck for their fourth goal of the half. Once again the Leitrim full back line buckled under the pressure of a wave of primrose and blue rushing towards them after primary possession was easily won in midfield and the end result was that Donie Smith was on hand to goal from close range.

That goal completed the first half scoring meaning Roscommon held a commanding 4-5 to 0-4 lead and not even the most loyal supporters could see how Leitrim could get themselves back in contention. That question would also have been asked in the Leitrim dressing room during the interval and one of first things Benny Guckian and his team of selectors decided to do was to make three changes. Martin Beirne, Ciaran Gilheany and Felim McHugh were all introduced and when the game resumed it was evident that even though they were playing against the wind, there was an added intensity to Leitrim’s performance when the game resumed.

While it was never likely that Leitrim would be able to overturn the 13 point deficit it was apparent the players were keen to go down fighting and they certainly did that as they played with pride, passion and skill in the second half. Such was the turn around that when Leitrim had reduced the deficit to just five points, there was genuine apprehension coming from the stands as the Roscommon supporters began to fear the worst.

As Leitrim brought the game to their hosts the ever reliable Shane Moran converted two frees. Moran, who captained Leitrim on Saturday last, certainly played a captain’s role as he led by example. When he was needed to drop deep into midfield he offered his side a platform to win possession and began attacks that was not there previously.

It was to get even better for Leitrim 11 minutes after the restart when Ciaran Gilheany struck for an excellent goal after a fluid passing move that also saw Martin Beirne and Keith Boyle heavily involved. When the ball fell to Gilheany he executed a perfect shot that gave Roscommon goalkeeper Tadhg Lowe no chance.

A minute later the Leitrim supporters were almost celebrating once more but on this occasion Tadhg Lowe was equal to the effort as he made a fine save to turn Keith Boyle’s effort past his post. Donal Wrynn converted the resulting the 45 but that was almost immediately cancelled out by a Shane Killoran point.

With 12 minutes of the game remaining Leitrim struck for their second goal to reduce the deficit to just five points. Felim McHugh and John Mulligan were instrumental and when the ball came to Shane Quinn it took a great save from Lowe to prevent a goal. However, there was nothing he could do to prevent Martin Beirne from finding the goal as he reacted quickest to force the ball home from close range.

For the first time since the game got underway the Leitrim supporters once again dared to dream that an upset may yet possible. At this crucial stage of the game the next score was going to be critical and to their credit Roscommon rallied and showed great inner strength to register three consecutive points from Ciaran Murtagh (free), Enda Smith and Donie Smith.

The game finished with Peter McGowan and Ciaran Murtagh (free) exchanging points while Michael McWeeney was issued with a second yellow card to further compound what was a frustrating afternoon for all concerned with the Leitrim team.