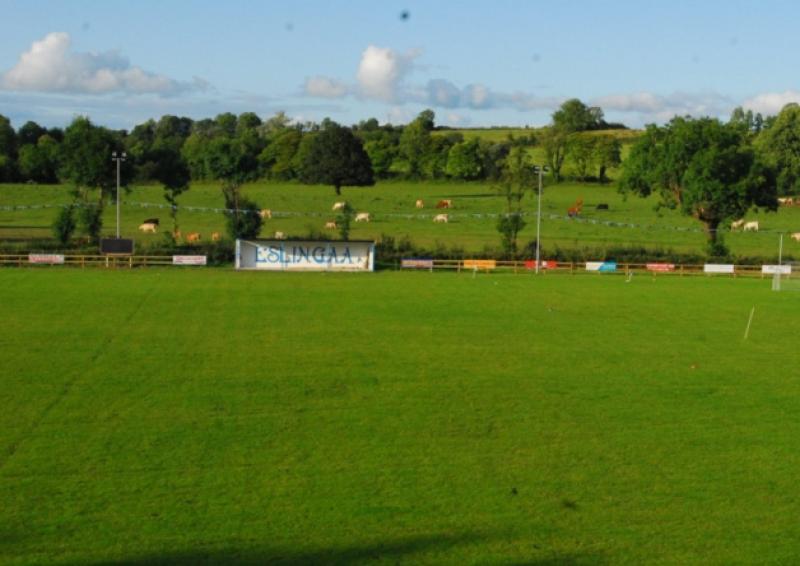 On Saturday next Eslin will celebrate a Gathering Weekend and it is only fitting that the community pay tribute to a man who dedicated so much of his time to the club.

On Saturday next Eslin will celebrate a Gathering Weekend and it is only fitting that the community pay tribute to a man who dedicated so much of his time to the club.

The club have decided to unveil a special memorial plaque at the dressing room to the late Seamus Gallagher.

Seamus had a lifelong connection with the club. It took a brave man to stand in goals but Seamus never flinched from the challenge as he lined out in goal for Eslin in the late 1960’s. Seamus left Eslin for work in England but returned again in the 1980’s. It was then he set up, what turned out to be a very successful business namely “Gallagher’s Carpets” His successful business of many years was a reflection of his personality.

He was a straight man to deal with, up front and took extreme pride in delivering an excellent service to all his customers. It takes a good business man to weather the tough economic times of recent years and Seamus did just that.

When Seamus returned from England he became actively involved with Eslin GAA in a variety of capacities. He became treasure of the club in 1989 where his business sense always returned a healthy end of year balance. Seamus went on to become Chairperson of the club from 2000-2003. He was instrumental in a lot of developmental changes in the club. Seamus was particularly involved in developing our dressing room to the high standard they are today.

His generosity to the club was massive. He was a long standing sponsor of our club also for 18 years in total. He did all this because he was proud of his Eslin roots and proud to have Gallagher’s printed on the Eslin Jersey.

This weekend we remember the lifelong contribution Seamus had with our club as we unveil a memorial plaque at the very dressing room he helped develop. His generous support of fundraising and to our club in general went far above the call of duty. At 3pm on Saturday, October 26 we pay a special tribute to Seamus.

A man of few words, not one to boast or seek attention, a man who enjoyed the simple things in life - a walk with his dog out the bog road, fishing, a family gathering, watching T.V., the Sunday Game, the satisfaction of a job well done.

We look forward to seeing the community gather at 3pm to honour a man who dedicated his life to the club. There will be tea and light refreshments afterwards