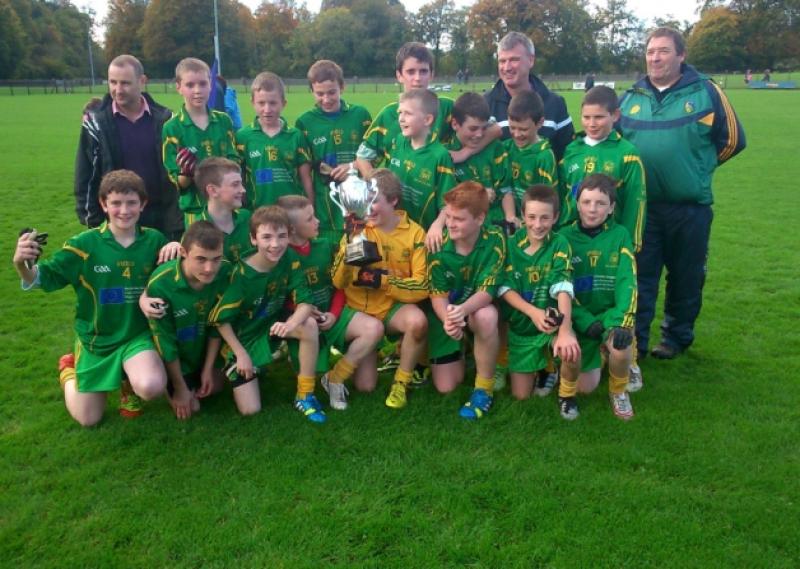 Fenagh-St Caillins claimed the U-13, 15 a-side title on Sunday afternoon last in Cloone when they overcame a very determined and talented St Marys team who pushed them all the way to the final whistle on a final score of 4-06 to 4-03.

Fenagh-St Caillins claimed the U-13, 15 a-side title on Sunday afternoon last in Cloone when they overcame a very determined and talented St Marys team who pushed them all the way to the final whistle on a final score of 4-06 to 4-03.

Fenagh opened the scoring with a point from Oisin Mc Loughlin but St Marys quickly responded with a goal from Oisin Bohan and another from Nathan Tyrell to take a foothold of the game. Fenagh fought back with four points and a goal before half time from James Lennon to leave Fenagh one point up at the break. Cormac Scollan replaced Luke Killkenny at half time and proved to have a major impact on the game scoring a goal early in second half to kickstart a period of dominance for Fenagh, Oisin Mc Loughlin and Fergal Mc Loughlin added further goals for Fenagh to put them in control but St Marys werent going to give up without a fight and finished very strong with Two goals from Adam Reynolds and a point from Paul Woods but Fenagh held out for a deserving win.

Ballinamore-Sean O Heslins claimed the U13 13 a-side final when they overcame Leitrim Gaels in a very close and entertaining final played in Cloone on Sunday afternoon on a scorline of 5-13 to 2-13.

The first half was a close encounter with both sides exchanging scores with only 2 points in it at half time in Leitrim Gaels favour. The second half started in the same manner with Ballinamore getting a goal right from the throw in only to be cancelled out by Leitrim Gaels a few minutes later.

Both sides exchanged scores and the result was in doubt right up till the last few minutes when Ballinamore pulled away scoring 2-04 in the final five minutes. There were excellent performances on both sides with John Conway Cathal Mc Hugh and Tom Prior in top form for Ballinamore with Jack Flynn Shane Finn and Stephen Goldrick leading the charges for Leitrim Gaels.

Kiltubrid claimed the Under13 11 a-side title last week in Fenagh when they overcame an understrength Gortletteragh.

The damage was done in the first few minutes when Kiltubrid got off to the perfect start with a hatrick of Goals from an onform forward Barry Mc Weeney. This was the foundation and a lead they never looked liked loosing. It took Gortletteragh a while to settle but to their credit they took the game to Kiltubrid with Oisin Niblock Jack Davis and Jamie Quinn leading the charges for Gortletteragh but the had no answer to the scoring power of Kiltubrid with Mc Weeney and Dylan Easterbrook on top form.