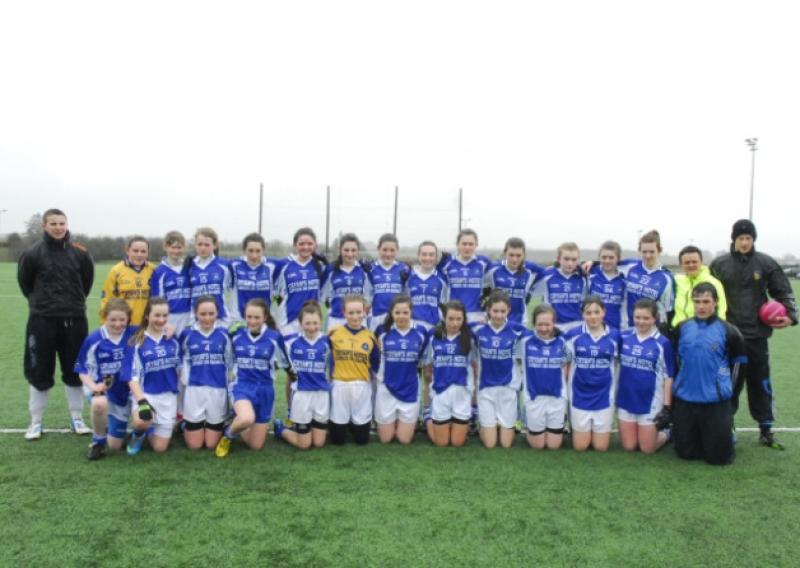 There was heart-break for the Carrick CS U-14 players last Thursday when they were defeated in the Connacht A Final in Ballyhaunis.

There was heart-break for the Carrick CS U-14 players last Thursday when they were defeated in the Connacht A Final in Ballyhaunis.

While the final score may suggest a comprehensive victory in a one sided game for Presentation College Tuam, Carrick certainly played their part in this final but were simply undone by a more clinical side.

Played in extremely difficult conditions in the magnificent Connacht GAA Centre of Excellence, Carrick brought the game to their opponents in the opening stages of the first half, despite the fact that they were playing against a strong wind and in driving rain.

Carrick enjoyed the better of the opening exchanges as the game was played in the Tuam half for the opening minutes but when Tuam launched their first attack they illustrated how dangerous they are.

Two of their standout performers, Niamh Daly and Amy O’Donovan combined and O’Donovan struck for the game’s opening point.

From the resulting kickout Tuam won possession and Daly pointed to double her side’s lead.

The Carrick players were evidently shellshocked at this stage and Tuam extended their lead when Amy O’Donovan pointed in the eight minute.

To their credit the Carrick players regrouped and they launched an impressive attack in which Vivienne Egan, Hannah Farrell, Aisling Bruen and Hannah Bird were all heavily involved but once again the Tuam defence was proving to be resolute and Bird’s shot was deflected wide.

With Carrick enjoying plenty of possession and Kasey Bruen performing well in a deep role, Carrick looked as though they may be able to get back in contention but they were dealt a cruel blow in the 14th minute when Tuam struck for their second goal.

Amy O’Donovan and Niamh Daly combined to find Keisha Geraghty who dispatched her shot to the Carrick goal and further extend her side’s lead.

The first half scoring was completed when O’Donovan pointed to giver her side a commanding 13 point lead at the interval.

With the wind at their backs in the second half Carrick CS took the game to their opponents, but once again were finding it difficult to find the elusive breakthrough.

After plenty of pressure Carrick were dealt a further blow 12 minutes after the restart when they thought they had opened their account.

Hannah Farrell did well to beat her marker and then dispatched her shot to the Tuam goal but the score did not count as the referee’s whistle had already sounded for a Carrick free.

The resulting free was converted by Farrell and then with 10 minutes remaining Carrick did find the Tuam goal.

Hannah Farrell found herself through on goal after a long ball caught out the Tuam defence and with only the goalkeeper to beat she made no mistake.

There were hopes this score may signal a comeback but it was Tuam who were to have the final say as Niamh Daly scored Tuam’s third goal to seal victory.