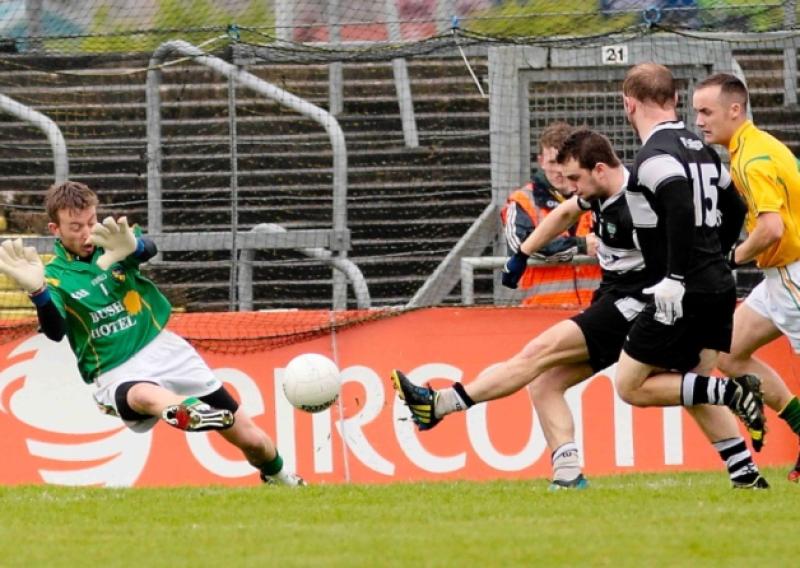 A failure to capitalise on goal chances cost Leitrim but over the course of the game Sligo were worthy of the Junior Championship title.

A failure to capitalise on goal chances cost Leitrim but over the course of the game Sligo were worthy of the Junior Championship title.

Jonathan Cassidy, Eanna Madden and Niall Duffy all spurned goal chances but it is worth noting that Sligo had arguably even better chances and but for the heroics of Enda Lyons they would have certainly found the back of the Leitrim net on at least one occasion.

Featuring the likes of James Glancy, John McKeon and Declan Maxwell this was a Leitrim team containing plenty of experience and the same was equally true of Sligo.

From early in the game it was evident that Sligo were keen to involve the talented Stephen Coen in the action as much as possible. Diagonal balls were played on a regular basis in his direction and while he did cause Leitrim plenty of problems, the man charged with dealing with him, Jonathan Cassidy was one of Leitrim’s best performers.

The fact that the Leitrim squad was assembled within the last month meant they may not have been as familiar with one another as would be the case if they were playing at Senior level but that certainly did not take away from their commitment.

In what was a very open game Leitrim signalled their intent from the start with Stephen McGurrin and Adrian Croal running at the Sligo defence before Gavin Sammon shot for what he hoped would be an early score but he was unfortunate to see the shot trail off and go just wide.

Having survived that early scare Sligo struck for the game’s opening point when Stephen Coen pointed after a fine pass from another of their star performers, David Rooney. The lead was doubled when James Hynes converted a free after a foul on Damien O’Boyle.

The game was six minutes old before Leitrim opened their account when Adrian Croal converted a free after a foul on Declan Maxwell and two minutes later the Leitrim fans were out of their seats, expecting to see the ball hit the back of the net.

Croal’s lay-off into the path of Jonathan Cassidy was perfectly timed and with only the goalkeeper to beat a score seemed inevitable and a goal highly likely. As he bore down on goal the expectation levels grew but unfortunately Cassidy’s shot was just wide and crashed into the side netting.

Adrian Croal’s second point of the game reduced the deficit to a point before Leitrim had another glorious goal opportunity.

James Rooney released Eanna Madden who appeared to mishit his shot, resulting in Aidan Devaney having to make a top class save to claw the ball away from the angle of post and crossbar.

At the other end Barry Walsh dragged a goal chance wide before Leitrim spurned another golden opportunity.

Niall Duffy had the chance of an easy point but opted for goal. However, his mis-cued effort proved more of a threat to Declan Maxwell’s head than it did to the Sligo goal!

Having survived those let-offs, Sligo, who were compact in defence and fast on the break, finished the half with pointed frees from David Rooney and James Hynes to give them a 0-6 to 0-3 lead at the break.

Leitrim opened the second half scoring when Ronan Kennedy converted a free before Sligo saw two goal chances go abegging. The first brilliantly saved by Enda Lyons, the second ruled out for a foul on the goalkeeper.

Leitrim enjoyed plenty of possession but it was midway through the half before they scored again, with John McKeon proving to be the calmest man in Hyde Park as he slotted his shot over.

Although James Hynes restored the two point lead when he converted a free, Leitrim continued to enjoy plenty of possession but struggled to break down a well drilled defence.

Having been under plenty of pressure Sligo almost scored a crucial goal but Niall Duffy somehow kept Gary Cadden’s shot at bay.

With eight minutes remaining Adrian Croal’s free meant there was just a point between the sides and the words ‘extra’ and ‘time’ were being muttered around the press-box.

Ultimately additional time was not needed as goalkeeper Aidan Devaney converted a massive free from and in the final minute victory was secured when David Rooney converted a free.