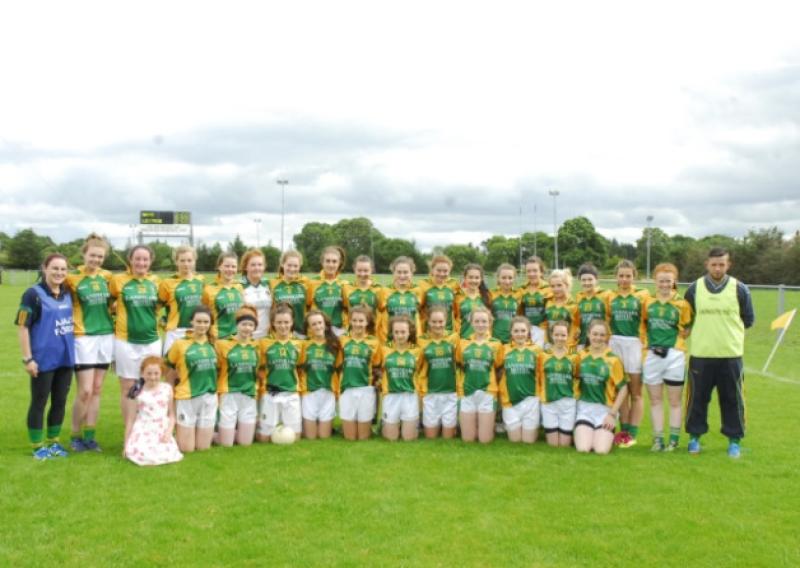 The importance of goals was made abundantly clear in Charlestown on Sunday last as Leitrim were pipped by a goal hungry Mayo.

The importance of goals was made abundantly clear in Charlestown on Sunday last as Leitrim were pipped by a goal hungry Mayo.

Ladies Connacht B U-16 Final

The U-16 Connacht Ladies B Final saw Leitrim take the fight to their opponents in the opening half when they had the benefit of a strong wind at their backs.

Some may have feared Mayo’s goals in the opening half would make life too difficult for Leitrim in the second half but once again they brought the fight to their opponents only to be undone by the concession of further goals.

Despite the defeat, there were plenty of positives from a Leitrim point of view.

Eimhin Quinn, Caroline Quinn, Carla LeGuen, Dearbhaile Beirne and the midfield duo of Eilish O’Dowd and Emma Quinn all played a huge part in what was an impressive Leitrim performance but ultimately they were undone by Mayo’s clinical forwards with Roisin Durkin proving to be particularly hard to deal with.

With a strong wind at their backs Leitrim began positively with Dearbhaile Beirne fresh from her athletics gold medal in Tulllamore proving to be a real thorn in the Mayo side.

The game began with Leitrim taking the game to their opponents and points from team captain Carla LeGuen, Dearbhaile Beirne (free) and Eilish O’Dowd gave Leitrim a good lead before Mayo gave their first glimpse of their power as an attacking force.

Roisin Durkin ran at the heart of the Leitrim defence before shooting but she found Leitrim goalkeeper Kiera Masterson to be a formidable opponent as the St Joseph’s goalkeeper stood strong to deny the Mayo corner-forward.

Having survived that scare Leitrim extended their lead when Beirne pointed after Carla LeGuen’s shot came to her via the Mayo crossbar.

Mayo finally registered their first score in the 12th minute when Elaine Needham pointed after good work from Hannah Cleary.

Having found their scoring touch, it took Mayo just another minute before they score the game’s opening goal.

Amy Dowling found Roisin Durkin who turned sharply before dispatching her shot to the Leitrim goal from close range.

A Dearbhaile Beirne free helped steady the nerves for the Leitrim players but Mayo were evidently growing in confidence and with 10 seconds of the half remaining they scored their second goal of the game.

Once again Roisin Durkin proved to difficult to deal with and after she exchanged passes with Saoirse Ludden she struck for Mayo’s second goal and that was quickly followed by a Hannah Cleary pointed free.

To their credit Leitrim responded well once again with Dearbhaile pointing after a fine move that began deep in Leitrim’s half with Aine Flood.

In injury time the first half scoring was completed with Dearbhaile Beirne pointing again, this time after Eilish O’Dowd did well meaning Leitrim trailed by a point at the interval, 0-7 to 2-2.

Within a minute of the restart the sides were level when Carla LeGuen pointed and it could have been much better for Leitrim a minute later but Aoife Byrne was denied by Mayo goalkeeper Kathleen McNally.

Leitrim edged back in front when Dearbhaile pointed seven minutes after the restart but that lead was almost immediately wiped out as Mayo replied with two points from Rebecca Waldron.

A Dearbhaile Beirne free levelled matters once again before Mayo struck for their third goal with Rebecca Waldron dispatching an excellent shot to the top corner of the Leitrim goal.

With Leitrim now playing into a breeze that was getting increasingly stronger it was looking ominous for Leitrim but they continued to give their all.

Eilish O’Dowd and Dearbhaile Beirne pointed either side of a Rebecca Waldron point before Leitrim regained the lead when they struck for goal with 11 minutes remaining.

Eilish O’Dowd and Dearbhaile Beirne did very well to create an opportunity for Emma McGovern who applied a composed finish to the bottom corner of the goal.

The celebrations suggested Leitrim believed they could win but Mayo responded strongly, scoring 1-1 in the space of two minutes to edge back in front with Elaine Needham on target for the goal.

Rebecca Waldron then scored 1-1 as the game seemed to be slipping away from Leitrim, however two Dearbhaile Beirne pointed frees gave a glimmer of hope.

A goal was needed by ultimately there was to be no heroic comeback for Leitrim but they deserve credit for the part they played in an absorbing contest that ebbed and flowed from start to finish.