A true winner takes all encounter 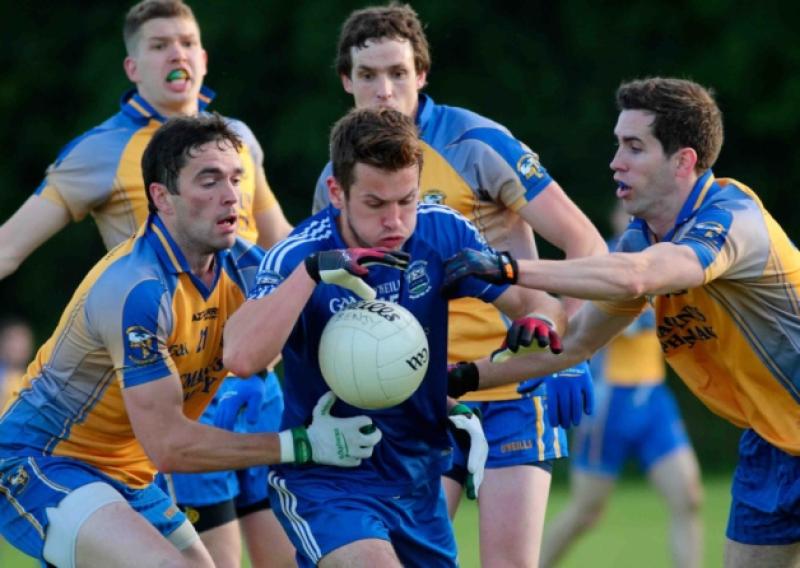 Do or die time in the Connacht Gold Senior Championship, or more accurately, do with sufficent scoring power to reach the playoffs as an intriguing round three lies ahead next Saturday.

Do or die time in the Connacht Gold Senior Championship, or more accurately, do with sufficent scoring power to reach the playoffs as an intriguing round three lies ahead next Saturday.

Only in the famed Group of Death is anything clear cut - both champions St. Mary’s Kiltoghert and Glencar/Manorhamilton are already through as Melvin Gaels and Aughawillan face a straight fight-out to finish third and perhaps earn a place in the quarter-finals.

Mohill and Gortletteragh are also sure of their places in the Quarter-Finals as they top their groups with two wins apiece but after that, any of the eight remaining teams can still reach the quarter-finals.

Where it gets very complicated is in how third place and how the best third place across three groups, with an automatic spot in the quarter-finals, will be decided.

In the Groups, the head to head results between teams will come into play if only two teams are involved in a tie while, over the three groups, scoring difference will be used to determine the best placed third team.

It means that not only will teams be looking to win next Saturday evening, there will be a very strong imperative for them to make sure they score a big win.

Perhaps the situation Annaduff and Allen Gaels find themselves in is the greatest strength of the three group, four team system.

Both have already lost two games but a big win in their last game and a win for the teams leading their groups could see them both leap-frog from first place to second and an automatic place in the quarter-finals!

It adds to the drama of the Group system and there is sure to be a lot of phone calls between the six venues next Saturday, as indeed there will be in the Intermediate grade, as permutations and scoring tallies will be added up by fans all around the county.

The only slight complaint, and it is only a slight one, with the system is that there is no reward for topping your group when it comes to the quarter-finals.

Two group winners can be paired together for the quarter-finals and the team who wins the playoff for eighth place might draw the team who finishes seventh so there is no incentive for Mohill, Glencar/Manor, Gortletteragh or St. Mary’s in pursuing a perfect record.

Indeed, you could get some of them deciding to rest key players if it suits them and the knock-on effects for other teams battling to reach the playoffs could be huge.

But that is an argument for another forum - the focus now is very much on making the knock-out stages. The break between games has proven to be a good thing as teams can build momentum and work out problems but next Saturday is the day when all the talking stops and it is time to deliver.

A true winner takes all encounter

Melvin Gaels and Aughawillan’s clash is the most clear cut of the weekend - win and you are in a playoff for the last quarter-final place, win by a big enough margin and you might sneak into the quarter-finals.

Two similiar sides with hard work and ferocious commitment mean this will be a hard hitting contest not for the faint hearted. Melvin Gaels are third by virtue of a superior one point scoring difference but that will only count if the game ends in a draw.

This is an incredibly tough one to call, both teams are missing key players. The Gaels gave Aughawillan a ferocious beating two years ago in the semi-finals and while they are not near that form, you get the feeling that the Kinlough men may just have the expereince to come through here.

Allen Gaels in a fight for their lives

Allen Gaels go into the final game against Carrigallen knowing they need a big win and an equally big favour from Mohill to qualify.

With the head to head rule, the Drumshanbo men need to defeat Carrigallen by a big enough margin to overcome their minus 11 scoring difference and hope that Mohill inflict a big enough defeat on Bornacoola to wipe out the scoring advantages.

Such a scenario could see the Gaels, bottom of the table, leap frog into second place and the automatic place in the quarter-finals but no doubt, Carrigallen will have a lot to say about that.

Carrigallen had a sold hard working victory over the Bors in the last round and they may have a slight edge on the Gaels here. Bornacoola will find it very difficult against an impressive Mohill, particularly with the loss of Damien Moran, and their tendency to start slowly may cost them. Carrigallen & Mohill for the wins in this group.

Group Two’s top of the table clash might be of academic interest but it is fascinating none the less. With no real prize for topping the group, both teams can afford to rest players or try new formations but both will also be eager to set down a marker for the latter stages of the competition. Both are going well and came through very tough tests against Melvin Gaels. Their scoring power and defences appear well matched so I’m going to take the easy way out here and predict a draw next Saturday.

Gortletteragh are the form team in the group and look as if they will have too much power for an injury hit Kiltubrid who were very disappointed by their display against Drumreilly. Scoring difference may prove crucial as Kiltubrid currently have the best scoring difference of the third placed teams so there is huge motivation for both teams.

Annaduff’s position at the bottom of the table is misleading as they have put in some good performances but haven’t been able to sustain them for 60 minutes in their two outings so far. A win for Drumreilly would leave them second regardless of any result and the form they showed against Kiltubrid suggest they will be very hard beaten.