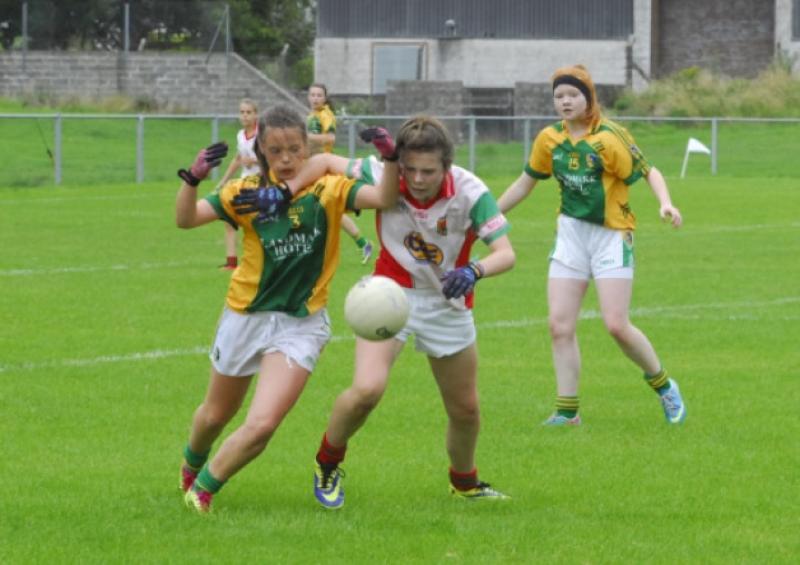 Sunday last in Charlestown proved to be a tough afternoon for the Leitrim U-16 Ladies but it was a game that will stand to them.

Sunday last in Charlestown proved to be a tough afternoon for the Leitrim U-16 Ladies but it was a game that will stand to them.

While scoring 1-15 is an impressive return, one that would normally be enough to win, from the scoreline it is also easy to see why Leitrim didn’t win. Quite simply, goals win games.

Leitrim had a number of goal chances but a combination of good defending, strong goalkeeping and shots that were off target meant the Mayo goal was breached just once over the course of the game.

At the other end of the pitch Mayo were clinical as they took their chances, ensuring even when they were being outplayed, they were still in contention on the scoreboard.

The performances of the Mayo full-forward line, in particular Roisin Durkin and Rebecca Waldron was pivotal to their success. Both had a huge say on proceedings and were instrumental to their sides victory. If Leitrim had been able to cope better with that threat, in terms of first of all preventing the service and then nullifying the threat when they were in possession the chances of victory would have increased significantly.

Leitrim deployed Aine Flood in a number of positions but struggled as the game progressed to determine where she would be most effective. When she was deployed to win breaking ball as a third midfielder, Mayo cleverly brought another player into the midfield area where it became congested and when they brought her back to the half-forward line, she immediately had a Mayo jersey following her like a shadow.

While Eilish O’Dowd and Carla LeGuen were hugely important to Leitrim from an attacking point of view, it is fair to say that Leitrim’s main threat invariably comes from Dearbhaile Beirne and this was something the Mayo team seemed to be aware of.

While she finished the game with an impressive tally of 0-11, the Mayo rearguard helped ensure she didn’t get a clear sight of goal over the course of the game. Her ability as a powerful runner seemed to be well known as there was always a player in close proximity when she picked up possession and that was usually followed by another defender helping out.

That meant the route to goal was quickly cut off forcing Beirne to either pass to a team mate or shoot for a point. Had she been afforded an opportunity to build up a head of steam and run on goal it could have been a very different outcome for Leitrim.

Another obstacle Leitrim had to overcome was the strong wind that was blowing in Charlestown. While it is true to say the weather was a factor for both sides, it was noticeably stronger in the second half, meaning Leitrim had to run into the wind when they were attacking.