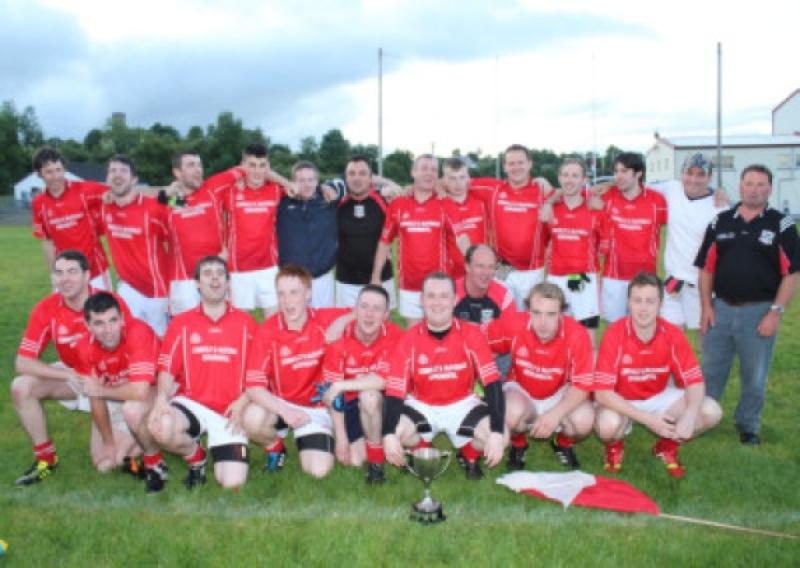 Three goals by St. Osnat’s full forward and target man Paul Clancy changed the course of the game in his side’s favour to take the title to the north of the county. After an impressive start the Mohill challenge faded. They also finished the game with 14 players when Barry Lupton received a second yellow eight minutes from the end.

Stephen Murphy opened St. Osnat’s account when he put over a 6th minute free. Nine minutes later Barry Lupton replied with a Mohill point. A well-taken Paul Clancy 18th minute goal after he was put through by a long ball in from Ryan Burke put St. Osnat’s into a lead they never subsequently surrendered.

Shortly afterwards Ryan Burke received a yellow card. Before the brake points apiece by Liam Burke and Ryan Burke put St. Osnat’s ahead by 1-3 to 0-3 at halftime.

Mohill keeper Alan Farry denied a 37th minute St. Osnat’s goal chance when he deflected a Dermot Clancy effort out for a ‘45’. After the free was taken ‘45’ Ryan Burke extended St. Osnat’s lead when he shot over.

St. Osnat’s had a let off two minutes later when Cathal Kerrigan pushed a Sean Kennedy goal bound effort out for a ’45.’ In the 49th and 50th minutes St. Osnat’s made sure a second Junior C title would come to Glencar.

In this short period Paul Clancy got his hat trick, assisted by Stephen Murphy and Dermot Clancy while seconds later Gerry Mooney finished to the Mohill net after getting onto a ball sent in by James Higgins.

Shortly afterwards yellow cards were issued to Stephen Murphy and Barry Lupton (his second). Conor Beirne and Murphy (free) traded points at opposite ends before a consolation Sean Kennedy goal was finished to the St. Osnat’s net after the ball put across the goalmouth by Paul McLoughlin.