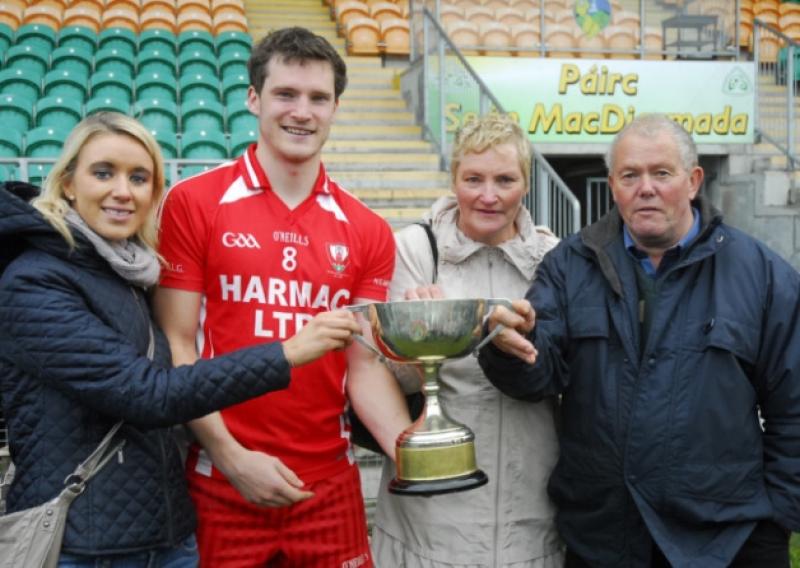 Another of those to have soldiered without a huge amount of success over the years for Dromahair was Paddy McGowan and after an injury setback last year, it was evident Sunday’s victory meant a lot to the midfielder who was named man of the match.

Another of those to have soldiered without a huge amount of success over the years for Dromahair was Paddy McGowan and after an injury setback last year, it was evident Sunday’s victory meant a lot to the midfielder who was named man of the match.

The loss of so many key players over the course of the year made Dromahair’s task even tougher but Paddy was quick to pay tribute to the young players who stepped up to the mark.

“If someone said at the start of the year that coming into the championship we would lose Adrian Fowley, Stephen Keegan, Conor Kelly, Conor Farrell, my own brother Christy with work commitments, that we would be in a county final and then win it, I would have said they were mad but it’s a testament to all the young lads.

“Coming to training in Dromahair you have all these young lads like Gary Fowley, Robbie and Bertie Cunningham, it’s brilliant. It’s brilliant to think there is going to be young fellows in Dromahair coming in to a set-up where we are senior league and championship. When I started off we were junior championship and Division 3 League.

Reflecting on the game, Paddy felt Dromahair picked up where they left off with their second half performance in the semi-final replay.

“It followed on from the second half against Drumkeerin. We spoke a couple of weeks ago about everything having to click for us. We saw the big breeze and then Ballinamore got a couple of points but then that goal seemed to settle us. Going in at half time there was a feeling that we had done a lot in the first half but we still had an awful lot more to give.”

When speaking about the mood in the dressing room at half time, Paddy insisted everything remained very calm.

“There was a nice calmness and controlled aggression to go and do it the second half. We knew from the experience of two years ago and it all just came to us on the day. We got goals at the right times, things just went right for us.”

Of course one of the goal scorers was the man of the match and he modestly referred to his goal as a “fluke.”

“The kickout came to me and I was a bit apprehensive because I thought someone was going to get to it but it landed in my hand,” he recalled. “I had a dodgy solo then and scooped it to Kevin Conlan and continued my run.

“I thought (Ballinamore goalkeeper) Philip Farrelly was going to clean me out but luckily enough I got there just before him. I don’t think I even looked at the goal, I just toe poked it, a complete fluke!