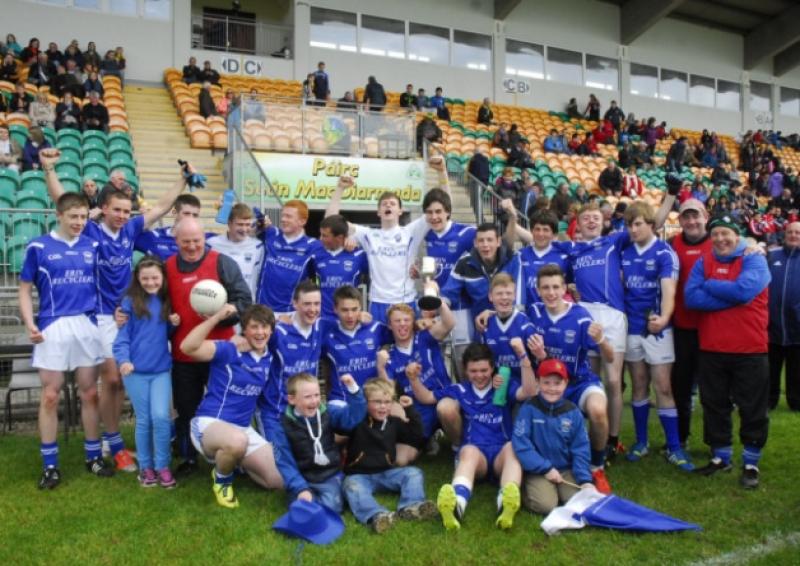 Minor 13 a side Championship Final

While a 15 point winning margin is impressive, it was only in the last quarter that Melvin Gaels pulled clear of a Kiltubrid side that pushed them all the way and refused to give in.

Melvin Gaels were more fluid up front and indeed hit the crossbar twice in the first half and the post in the second half. Had they taken these chances they wold have had a far more comfortable time of it.

As it was, they had ace marksmen in Daragh Rooney, Matthew Cleary and man of the match Damien Hughes who all caused problems for the Kiltubrid defence.

Hughes is a delightful footballer, full of silken skills with a great shot. He poached two excellent goals and was involved in many other scores for team mates.

If the Gaels had one fault, it was perhaps they didn’t get enough quick ball into Hughes who looked dangerous every time he got his hands on the ball.

For the neutral observer, this game was very entertaining with a glut of goals. Every time Melvin Gaels looked like they would pull clear, Kiltubrid showed commendable resolve to get themselves back into the game.

The first half was decent fare with some cracking scores from both sides.

Melvin Gaels Captain Killian McGloin got his side off to a good start with an early point against the fresh breeze but Kiltubrid responded with a point from the next kickout with Stephen McLoughlin shooting over from distance.

Eoin Dolan, who ended up with four points from frees, gave Kiltubrid the lead after 10 minutes before the Gaels struck for their first goal.

A great move involving Leo Ryan, Declan Clancy and Liam Ryan played in Damien Hughes and he coolly slid the ball under the advancing Declan Kelly.

Matthew Cleary added another point for Melvin Gaels but Kiltubrid’s character was not in question and Stephen McLoughlin scored a good point on the turn to leave just two in it.

The Gaels incredibly saw two shots from Daragh Rooney and Declan Clancy both come back off the crossbar in the space of seconds. But their pressure told when Rooney got in for a goal after his initial shot was blocked.

It was now their turn to defend for a while as Kiltubrid pushed on but the defence held fast until Eoin Dolan converted a free and Paddy Kelly played in Kevin Prior for a goal to leave it 2-2 to 1-4 in favour of Melvin Gaels.

With half time approaching, Melvin Gaels got back in control when another great move involving four of the five forwards carved open the Kiltubrid defence for Matthew Cleary to goal and put them four clear at the break, 3-2 to 1-4.

Playing against the breeze in the second half, Kiltubrid started strongly with Dolan tapping over another free.

Damien Hughes then crashed a ball off the post for Melvin Gaels but they soon followed up with points from Cleary, Liam Ryan and McGloin and it looked like they would pull away.

But Kiltubrid showed great courage to get back into it with Patrick Meehan flicking a rebound to the net to cut the gap back to three.

However, from there, Melvin Gaels drove on and Liam Ryan converted a lovely point after great work by Hughes. Rooney from a free and a classy score from Declan Clancy stretched out their lead to six.

Melvin Gaels then lost Edward Gallagher who was initially black carded but then received a straight red from referee Kevin Mallon for dissent.

Nevertheless, Melvin Gaels were on a roll and Cleary and Rooney (two) lofted over points, and they embellished the scoreboard in the dying minutes when Hughes struck a deadly finish to the net.

From the kickout, the ball came out to Daragh Rooney and he smashed an unstoppable shot to the top corner from 20 yards out.

It was hard luck on Kiltubrid who battled hard and perhaps 15 points was not a true reflection of their effort. However, Melvin Gaels were very worthy champions, well drilled, good in defence, strong in the tackle and with no little skill all around the field. Well done lads!