Galway prove too strong for Leitrim in Connacht Junior Championship 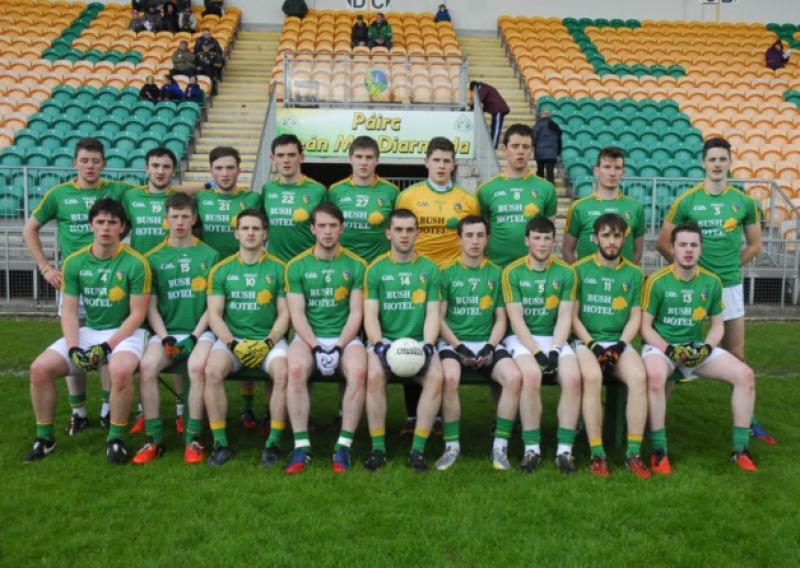 Leitrim exited the Connacht Junior Championship on Wednesday evening after a game that lacked anywhere near the intensity that can be expected when Leitrim and Galway lock horns for real in next Sunday’s Senior Championship encounter.

Leitrim exited the Connacht Junior Championship on Wednesday evening after a game that lacked anywhere near the intensity that can be expected when Leitrim and Galway lock horns for real in next Sunday’s Senior Championship encounter.

The opening quarter resembled a chess match with Leitrim sitting deep and looking to catch Galway on the break as they utilised the pace of Niall Brady.

Galway on the other hand looked eager to commit men to attack with defenders seemingly attacking at will. Full-back Declan Kyne, who may figure for the Senior team next Sunday was rock solid in defence and he was regularly to be found roaming forward, assisting his team mates at the other end of the pitch. Wing backs Johnny Heaney and Peadar Eana Seoighe also asked plenty of questions of the Leitrim defence as they attacked whenever the opportunity arose.

Galway’s Patrick Sweeney, who was due to start for the senior team a few days earlier against New York only to be withdrawn due to illness had the game’s opening chance, after just 45 seconds, but he passed up an excellent goal scoring opportunity when he dragged his shot wide.

Chances for both sides to break the deadlock came and went and the game was almost eight minutes old before the opening score arrived with Kevin Shanley doing well to point from a tight angle. Gary Plunkett and Niall Brady were heavily involved in the build-up with Brady looking particularly lively during the opening exchanges and when the ball fell to Shanley, the Bornacoola man made light work of the difficult angle to open the scoring.

After a slow start the game began to show some signs of life and a minute later Galway were back on level terms after another who impressed over the course of the game, Peter Cooke, struck for Galway’s first point.

Galway barely had time to celebrate that point before Leitrim struck to regain the lead. James Rooney and Mark Plunkett combined well to find Gary Plunkett who slotted the ball over the Galway bar to re-establish Leitrim’s one point advantage.

Once again Galway wasted no time in replying and again it was Peter Cooke who struck, this time from a huge distance, to restore parity.

Galway were the better team for the remainder of the half but a series of bad wides and missed opportunities meant there was still nothing to separate the sides as the game edged towards 17 minutes.

The pressure being applied may not have been yielding scores but it was making life difficult for the Leitrim players and when a loose pass was pounced on by Peter Cooke it looked ominous from a Leitrim point of view. Cooke released Matthew Reddington and with the defence out of position goalkeeper Brendan Flynn was left with little option but to race from his goal in an effort to halt Reddington’s progress. However, the Galway wing-forward was alive to the presence of Flynn and with a deft touch he calmly flicked the ball over the goalkeeper’s head before it found its way to the unguarded goal.

Points from Patrick Sweeney and Paul Whelehan helped Galway open up a five point lead before Leitrim ended an 19 minute period of play without a score when they launched the perfect counter-attack.

With Galway committing numbers to attack Kenny Cox led the charge out of defence and when he found Ronan Flynn, the Glencar/Manorhamilton player made no mistake.

However, it was to be The Tribesmen who would complete the first half scoring with Matthew Reddington pointing to give his side a 1-5 to 0-3 advantage.

Leitrim made an encouraging start to the second half with Niall Brady, as he does so often, showing good anticipation to get in front of his marker to win possession and he made light work of the shot which he slotted over the bar.

To their credit Galway hit back immediately with a fine point from Michael Day, doing so as the talismanic Patrick Sweeney lay injured.

The intensity to the second half was far removed from what would be expected for an inter-county game and the only score over the next 15 minutes came from the boot of Galway’s Matthew Reddington who went on to claim the man of the match award.

With 12 minutes of the game remaining and desperately in need of a score to reignite their challenge Leitrim looked to an unlikely source for help and goalkeeper Brendan Flynn made light work of a 45 which he effortlessly slotted over the Galway bar.

That score that seemed to breath fresh belief into the Leitrim team and they replied with a score that showed the best of the Leitrim team as an attacking force. Dillon Keane, Ronan Flynn and Gary Plunkett were all heavily involved in a move that was full of pace and accurate passing and when the ball came back to Flynn, he applied the finish the move deserved to reduce the deficit to four points with 11 minutes remaining.

It seemed as though the momentum was beginning to swing in Leitrim’s direction but Galway came storming back. After Tommy Rogan did brilliantly to clear a Matthew Reddington shot off the line, Niall Walsh was on hand to point for The Tribesmen.

Leitrim did reply with a Ronan Flynn pointed free but there was to be no denying Galway their place in the Connacht Final and they completed the scoring in the final minute with a Craig Kennedy point.