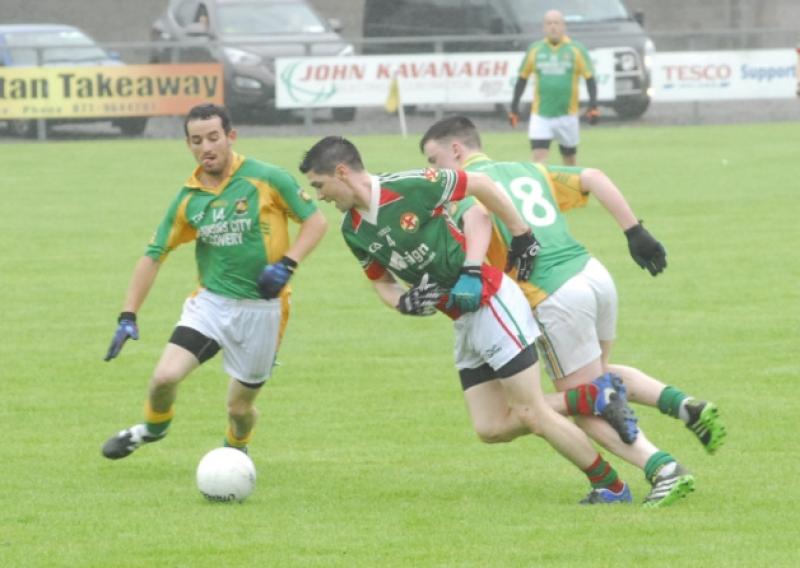 Kiltubrid came back at the death to grab a late win over Drumreilly in Saturday’s entertaining first round clash that was played in damp conditions in Ballinamore.

Kiltubrid came back at the death to grab a late win over Drumreilly in Saturday’s entertaining first round clash that was played in damp conditions in Ballinamore.

After a somewhat titanic battle, Drumreilly were leading a single point with some four minutes of added time played. Then Noel Gill won a ball about 35 metres out before advancing to fire in a shot that just dipped under Drumreilly’s crossbar with a Kiltubrid forward in close attendance to keeper Michael McGirl.

Kiltubrid had snatched a victory from the jaws of defeat and Drumreilly was left to wonder what might have been had they been able to hold out for a few seconds more.

The game had been a tit for tat encounter - Drumreilly led by 0-2 after ten minutes thanks to Conor Gaffney who put a pair of frees on target.

Kiltubrid opened their account when Kealen McKeon pointed from an 11th minute free and some six minutes later Stephen McLoughlin levelled the scores.

Kiltubrid took the lead for the first time when Kealen McKeon shot a 20th minute point but Conor Gaffney levelled four minutes later with his third free. A 27th minute foul on James Holohan saw referee Martin Kelly issue Kiltubrid’s Fergal McWeeney with a black card and Gaffney put his side ahead when he found the target from the free.

The sides were back on level terms within the space of a minute when Kealen McKeon added his third Kiltubrid point from a free.

A well taken point from play s by Patrick Moolick put Kiltubrid back in front and just before the break Drumreilly won a ‘45’ which Declan Maxwell converted to send the sides in level on 0-5 all at halftime.

Kealen McKeon edged Kiltubrid ahead when he slotted over a 35th minute free.Two minutes later the game was back in the melting pot again when Conor Gaffney punished a foul on James Holohan with a point from the resultant placed ball.

Kiltubrid got their noses in front when Patrick Moolick clinically curled his 46th minute shot from out on the right wing just inside the upright. But James Holohan drove forward and landed a point from 35metres out.

But Kiltubrid got back on top within the space of another minute after Owen Dolan finished off a fine run with a fisted point. The men from Kiltubrid held onto to this slender advantage for another 11 minutes until Drumreilly levelled the contest for a seventh time after Sean Fee surged forward from his left half back berth to shoot a 61st minute point.

Drumreilly grabbed the lead some three minutes later after Conor Gaffney ran at the Kiltubrid defence and was fouled some 35 metres out. Gaffney slotted the resultant free between the Kiltubrid uprights to edge his side into a minimum margin lead.

But there was still enough added on time left for Kiltubrid to work the ball into a scoring position and to James Gill who drove forward to the left of the Drumreilly posts and fire in a speculative shot for the game’s only goal that also proved to be the winner.