Mohill at their ease but weak Gaels will be back 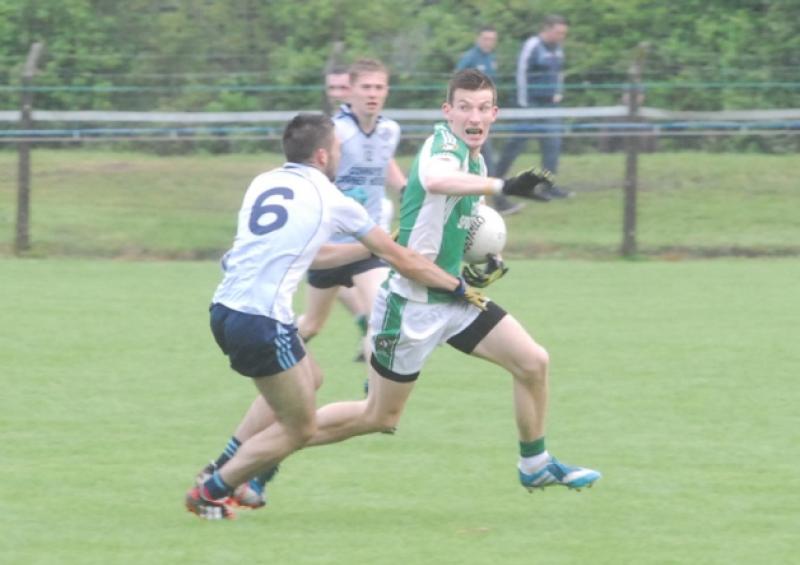 Mohill will be quite happy with a comfortable win over Allen Gaels last Saturday in Cloone where they showed just how potent they can be when they find a groove.

Mohill will be quite happy with a comfortable win over Allen Gaels last Saturday in Cloone where they showed just how potent they can be when they find a groove.

As they have shown in the past, when Mohill find their form, they play with a confidence and a barrage of scores can follow as indeed they did against Allen Gaels just before halftime when they out-scored the Drumshanbo men 1-5 to 0-2.

Shane Quinn was the key figure for the Mohill men, he was very impressive at centre-forward as he controlled the play, was central to their attacking play and weighed in with four excellent points.

Alan McLoughlin and Keith Beirne had their moments but both would be better with the missing Ronan Kennedy there to provide a more clinical finishing edge. When Kennedy is back, Mohill’s attack will be very formidable.

Caillin Canning caught the eye in the middle of the park, Ronan Gallagher and Oisin Madden were very solid while Michael McGuinness executed the extra man in defence with a class and experience that reminds you just how good of a player the former Leitrim star was.

For Allen Gaels, and as strange as it is to say, this was a good defeat for the Drumshanbo men who were destroyed by absentees with five first choice players missing. County panellist Thomas Mulvey, former Leitrim player Alan Wynne, Nicholas Moore and Martin Beirne were huge losses for the Gaels and it showed.

It meant they didn’t use any subs, despite finishing the game with just 14 players after a late injury, but there was enough to suggest that at full-strength, the Gaels will be formidable opponents.

Mark Gunning was very impressive at full-back under a lot of pressure, James Flynn and David Wynne worked their socks off with good support from Martin Rafferty.

Brian Mulvey showed enough to understand why so many rave about his potential and he was at the heart of everything good the Gaels did while Shane Walsh and Sean Mulvey fared well.

All in all, not too bad of a start for Mohill and Allen Gaels as both can be in the shake-up later in the year.

Mohill signalled their intent for the Championship with a comfortable victory over a seriously under-strength Allen Gaels in Cloone.

Keith Beirne opened the scoring with a dummy and a long range point off the left wing but Mohill had a scare when Brian Mulvey’s shot was deflected onto the crossbar by keeper Dermot Scollan.

Brian Mulvey converted a free three minutes later while he was denied an equaliser when his shot hit the post while Dermot Scollan scored a weak Dylan McGowan effort.

Keith Beirne won the ball out on the wing and surged inside, beat his man and rounded the keeper to slot the ball to the net although Allen Gaels protests about an over-abundance of steps did appear to have some merit.

Despite a Brian Mulvey free, Mohill led 1-8 to 0-4 at the halftime break but that lead was seriously dented within the first two minutes of the second half when Shane Walsh hooked a high shot over his shoulder and over the bar after the restart.

Then Sean Mulvey’s long ball deceived the keeper and defence and bounced into the net as Walsh distracted the Mohill defence to leave three points between the teams.

With ten minutes to go, Alan McLoughlin scored a brilliant effort to put Mohill four up but Allen Gaels then had a great chance to put them under huge pressure.

First Brian Mulvey saw a poor shot spilled by Dermot Scollan, the ball did squirm underneath and behind him but although one umpires did appear indecisive and half raise his arm, no flag was raised and the ball cleared.

Crucially, Allen Gaels then had three costly wides from good positions from Sean Mulvey, Alan McTigue and Brian Mulvey that would have left the game in the melting pot and Alan McLoughlin scored a huge point after great work from Oisin Madden won the ball back out near the sideline.

The score seemed to liberate Mohill and they quickly fired over points from Keith Beirne, sub Ronan Gordon and Alan McLoughlin with Brian Mulvey hitting a late consolation free.