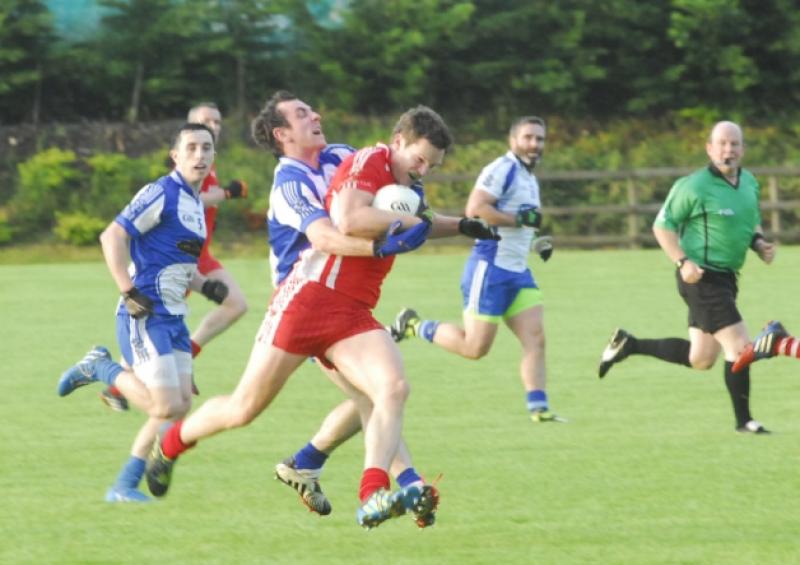 Coming to the closing stages of the game Dromahair grabbed a two point lead but a quickly taken free by the Dromahair defence was intercepted by the Carrick attack and after a scramble in the goalmouth, St. Mary’s Brian O’Donnell pounced to hammer home the winning goal in the 58th minute.

After that score, three St. Mary’s players were dismissed during what might be termed a four minute period of madness. Up to this point it had been a good tempered and relatively incident free game.

Perhaps a rush of blood to the head on the parts of the players involved saw their side’s numbers reduced to twelve for the last minutes. Shortly after Brian O’Donnell’s late goal, Robbie Lowe received a straight card.

About two minutes later sub Niall Commerton, who had replaced Michael McWeeney on 21st minute black card offence, was himself dismissed on a black card.

Before the end James Glancy received a black card and following some jostling with Dromahair players prior to his departure from the scene was issued with a straight red card.

The Carrick men enjoyed a purple patch after this and claimed a five point’s lead by 13th minute. In this period Robbie Lowe hit home the game’s first goal while prior to this Ray Mulvey shot two points in succession.

However Dromahair got right back when Robbie Cunningham evaded his marker and shot home a well-taken 14th minute goal. Over the next four minutes, St. Mary’s Jack de Lacy and Dromahair’s Cian Clinton traded points.

Shortly afterwards Dromahair’s Fergal McMorrow was a yellow card recipient. Alan Doherty reduced Dromahair’s lead to the minimum when he put over a 26th minute free.

Over the next five minutes, Dromahair’s Gerard Kelly and St. Mary’s Brian O’Donnell traded points from play. Before the break a Robbie Cunningham point enabled Dromahair to claim a 2-6 to 1-7 interval lead.

An exchange of points from play in the opening six minutes after the restart by St. Mary’s Niall Comerton and Dromahair’s Kevin Conlan saw the North Leitrim men maintain their two point’s halftime advantage.

But over the next three minutes St. Mary’s closed the gap and got on level terms with Dromahair thanks to Ray Mulvey and Alan Doherty who shot points.

Niall Comerton was issued with a 40th minute yellow card. The nip and tuck nature of the contest continued for another five minutes with sub Adrian Fowley and Robbie Cunningham hitting over a point apiece for Dromahair which were answered by two Ray Mulvey points.

Over the next six minutes Dromahair took a slight grip on the proceedings to go two points up after Robbie Cunningham and Gerard Kelly scored. But the Dromahair lead was short lived when Brian O’Donnell struck his 58th minute winning gaol while sub Clement Cunniffe fisted over an insurance point for St. Mary’s.