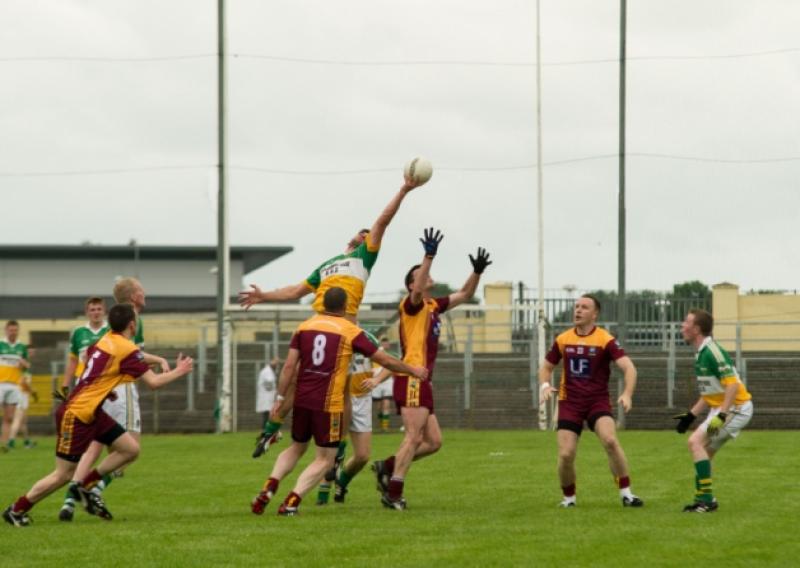 Division 2 Annaduff upset their Division One rivals Gortletteragh in a defensive affair in Pairc Sean Mac Diarmada. Gortletteragh were wasteful, missing a lot of good chances but their goal came with a large slice of fortune.

This was never going to be a high scoring game as both defences were on top with Gortletteragh using Francie Flynn in a sweeper role. Annaduff’s Chris Farrell did an excellent job in keeping County Minor Jack Heslin quiet and was well supported by all the Annaduff backs, while up front Ray Cox and Sean McNabola were a constant threat to the Gortletteragh defence.

The Gortletteragh defence was sound throughout with Kevin McGrath, Niall Woods standing out. County goal-keeper Cathal McCrann won plenty of possession but was let down by poor distribution while Jack Heslin and Neil Quinn were the pick of a hard working Gortletteragh attack who found the Annaduff defence difficult to break down.

Annaduff started the best but had two wides from Joe and Kenny Cox in the first four minutes while Sean McNabola saw a good attempt at a free strike the post and be cleared.

Typically, that meant that Gortletteragh would get the first score and they did when Neil Quinn opened the scoring from play on nine minutes. Francie Flynn and Sean McNabola swapped wides before Annaduff opened their account with a point from former county star Ray Cox.

The wides continued but the game came to a halt for five minutes when James Cox and Conor Reynolds came together in an accidental collision, both players needing treatment with the Annaduff man eventually having to be replaced by former county player Dermot Reynolds.

Heslin did get off the mark when he scored a super point from out on the wing but Sean McNabola replied with an equally impressive free from 48 metres out towards the stand in Pairc Sean.

Annaduff were now flying and they added points from Ray Cox and McNabola to give them a 0-5 to 0-2 lead at the halftime break and the lead was extended with another excellent long range point from McNabola, this time from play, a minute into the second half.

A foul on Niall Woods saw Cathal McCrann convert a free and sub Cathal Quinn pointed after some good link-up play five minutes into the half. McCrann shot wide after good work from Heslin but a foul on Ray Cox allowed McNabola notch yet another free.

Gortletteragh gave themselves a lifeline nine minutes into the second half when a long rage shot from Cathal Quinn dropped short. Keeper Kevin Ludlow failed to hold the ball and it was scrambled to the net by Conor Reynolds.

Following a McNabola wide, Jack Heslin pointed after good work from McCrann and the county man added another free after a foul on Conor Reynolds. Annaduff nearly had a goal but keeper Conan Clarke made a point blank save from Brendan Guckian after a great move, Kenny Cox firing over from the follow-up.

Ludlow made amends as he pushed out a Neil Quinn shot for a 45 which was missed but Annaduff suffered a blow when Brendan Guckian was black carded for pulling down Niall Woods.

With both teams hitting wides, McNabola and McCrann swapped points as Gortletteragh remained one up before McNabola levelled matters from a free.

With time running out, Gortletteragh had two efforts from Niall Woods and Cathal McCrann drift wide but it was Joe Cox who held his nerve, firing over to secure a vital win .