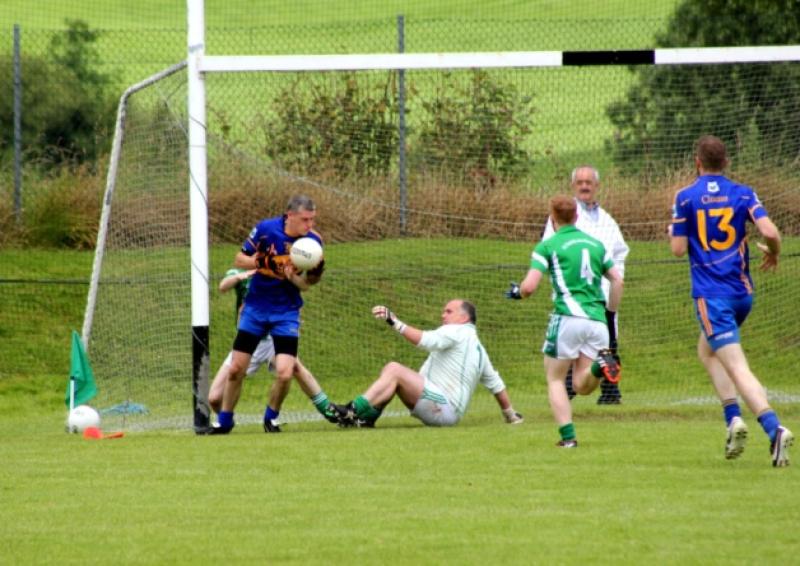 Aughnasheelin began their quest to return to the Senior Championship in winning style on Sunday last in Ballinamore with a deserved victory over Cloone.

Aughnasheelin began their quest to return to the Senior Championship in winning style on Sunday last in Ballinamore with a deserved victory over Cloone.

There was little to separate the sides as the game got underway but as the game settled down it was Aughnasheelin who looked the more composed in possession and potent in attack.

Cloone dictated matters as the game got underway and enjoyed a two point lead midway through the opening half but were unable to open up a greater lead and when chasing the game failed to score from play during the second half.

Brian Mulvey and Damien Kelly were both influential for Cloone in the middle of the field but as the game progressed, their dominance faded and Aughnasheelin began to take control of matters.

When Aughnasheelin got moving through the gears they were able to open up a three point lead by the time the half time whistle sounded.

The loss of Sean McWeeney after 10 minutes certainly didn’t help Aughnasheelin but it was a setback they responded well to.

Cloone will point to missed opportunities particularly in the second half when they had clear sights of the Aughnasheelin goal but were unable to convert those chances.

The first of those goal chances arrived just seconds after the restart as Brian Mulvey and Damien Kelly linked up before Mulvey delivered a searching fist pas in the direction of Adrian Nicholls who had positioned himself behind the Aughnasheelin defence.

Unfortunately for Cloone, Nicholls was unable to take control of the pass and the chance evaporated as quickly as it had materialised.

Cloone also saw Damien Kelly and Michael Bohan presented with a clear sight of goal in the same attack but both were denied by last ditch blocks when a goal seemed inevitable.

The failure to capitalise on those chances effectively signalled the end of Cloone’s challenge as Aughnasheelin were always able to keep their opponents at arms length.

Keith Sammon was one of the standout performers for Aughnasheelin, operating between midfield and the half forward line, he was excellent under the high ball and was to the fore in much that was good about Aughnasheelin’s performance.

In the closing stages Cloone’s goalkeeper Kieran Casey was issued with a black card but that had no bearing on the final outcome of the game.

Aughnasheelin levelled matters when Barry McWeeney converted an eighth minute free but they were dealt a blow when county captain Sean McWeeney’s involvement in the game was brought to a premature end after just 10 minutes.

Well taken points from Dean Kelly and Brian Mulvey gave Cloone a two point advantage midway through the second half but that was to be the last time they would hold the lead.

Points from Gavin Sammon, Fergal Earley and a Barry McWeeney free in the closing stages of the half helped up a 0-6 to 0-3 advantage for Cloone and within a minute of the restart they extended their lead when Conor Cullen pointed.

Brian Mulvey converted a 45 to help Cloone keep in touch but Aughnasheelin hit back with further points from Barry McWeeney (free) and Niall Mulvanerty, moments after his introduction.

A Gavin Reynolds free helped Cloone stay in touch but that was quickly cancelled out by a Barry McWeeney free meaning Aughnasheelin enjoyed a five point advantage with a little over 10 minutes left.

It was to be the free takers who would dominate matters during the closing stages with Gavin Reynolds adding three points to his side’s tally while Barry McWeeney scored two further frees for Aughnasheelin.