All square as neigbours can’t be separated 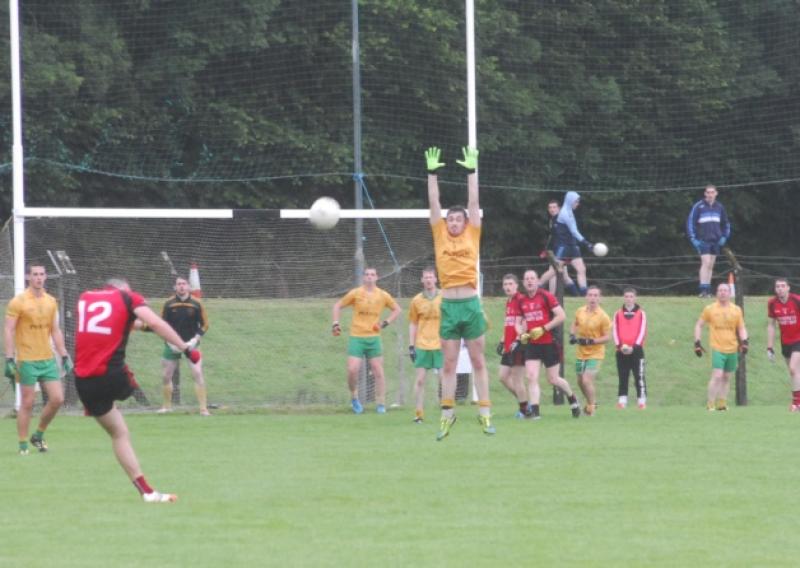 A draw was definitely the fairest result as Fenagh St. Caillin’s and Ballinamore Sean O’Heslin’s simply could not be separated in Cloone.

A draw was definitely the fairest result as Fenagh St. Caillin’s and Ballinamore Sean O’Heslin’s simply could not be separated in Cloone.

Played in dreadful weather conditions, two young teams failed to impose themselves on a hard fought encounter that will leave both teams feeling both happy they didn’t lose and a little disappointed that they didn’t win.

The tone of the match was set early with Michael Doonan pointing in the first minute for Fenagh and David Duignan hooking a shot over the bar to level just a minute later but Ballinamore seemed to be adjusting to the conditions best as they soon went into a two point lead courtesy of two excellent Brian Beirne points.

But as O’Heslin’s looked as if they were about to dominate, back came Fenagh with Donal Wrynn scoring two frees, one from 30 yards and another from the corner to tie the scores after 13 minutes.

Wrynn followed with a poor wide while Shane Moran had a shot that was called wide to the ire of the Ballinamore players. Philip Farrelly made a good catch from a dangerous ball under pressure and straight from that, Ballinamore cut the Fenagh defence wide open only for Joe Murphy to lose control of the ball with only keeper Killian McLoughlin to beat as the goal beckoned.

Bobby O’Rourke set up his nephew Ryan for a good point but straight away, Luke Murphy fisted over to ensure it was level at four apiece at the break, the only other item of note being the substitution of former county star Wayne McKeon after 24 minutes.

Fenagh started the second half completely on top but they missed four good chances, Donal Wrynn twice off target while Ryan O’Rourke also wasted two chances and O’Heslin’s made them pay when Shane Moran and Luke Murphy linked up to find Dean McGovern who scored a fabulous point just as he took a heavy challenge.

Almost immediately, Liam Ferguson showed his leadership as he dodged two challenge and swept a shot from 45 yards over the Fenagh bar, a sense that Ballinamore were in command reinforced when the impressive Paul Gill received a black card for Fenagh.

The Ballinamore men could have opened a three point lead only for Dean McGovern’s shot come off the woodwork and Fenagh made them pay when Ryan O’Rourke converted a free.

Now it was Ballinamore’s turn to miss wides and Fenagh began to find their feet again, Donal Wrynn converting a free with ten minutes to go. The influential Shane Moran was lucky to avoid a black card, getting a yellow instead, for dragging down a Fenagh player and Fenagh went in front when Wrynn put over a free.

Again O’Heslin’s fought back when Niall McGovern made a vital interception and Luke Murphy scored a well worked score and true to form, they immediately took the led when Luke Murphy won a ball he shouldn’t have and sent it to Brian Beirne who then set up Shane Moran for a great point.

But in keeping with the game, Fenagh levelled with less than a minute left on the clock but from an unlikely source as Padraig Flynn found himself unmarked after a quick free and he sent a 40 yard shot unerringly through the posts.

Both teams had a chance to win it - Flynn hit a wide while Shane Moran was unlucky to see a 55 yard free go wide but a draw was undoubtedly the fairest result.

Two young teams show they have much to learn

That there is a tidal wave of talent coming through the ranks in both Fenagh and Ballinamore has long been obvious to anyone watching underage football in Leitrim over the past five years.

But last Saturday night also showed that the undoubted talent that Sean O’Heslin’s and St. Caillin’s possess still needs the experience and leadership from the older heads in their clubs to get them through the next few years.

Fenagh had club legends in Killian McLoughlin in goal, Bobby O’Rourke (who has trained most of those spectacular underage Fenagh teams) and Padraig Flynn on the field, lending their experience and it was Flynn who thumped a monster equaliser over the bar late in the game.

Liam Ferguson might not be of the same vintage as the Fenagh trio but he performed the same role for a very young Ballinamore side, one epic point during the second half emphasising just how important his leadership was.

Both sides featured county stars in Shane Moran and Donal Wrynn and the big two probably cancelled each other out - Moran had more influence on general play, he drove his team forward from the middle of the park and almost snatched the winner, a late free going narrowly wide.

Wrynn wasn’t quite as effective from open play but he was deadly effective on the scoreboard, his four points a huge contribution in truly awful conditions in Cloone where keeping your footing was of prime importance.

There were others who shone - Paul Gill was immense at full-back and a dominant personality until a black card ended his game early, Dean McGovern and Brian Beirne showed glimpses of potential while Keelan McKeon did a good job in limiting the impact of Ryan O’Rourke.

One surprise was the early substitution of former county star Wayne McKeon after just 24 minutes as the Ballinamore man was well shackled by an impressive Gill.

Ballinamore were left frustrated as they had beaten Fenagh by 22 points last year in the championship and you definitely got the feeling that St. Caillin’s will have taken more from the result.

It was not a good game but the awful conditions contributed to that. Both teams are searching for a breakthrough with very young teams - it may not come this year but there is no doubt that if they can keep their young players focussed, dedicated and together, both these clubs could be looking for glory at a much higher level in the years ahead.