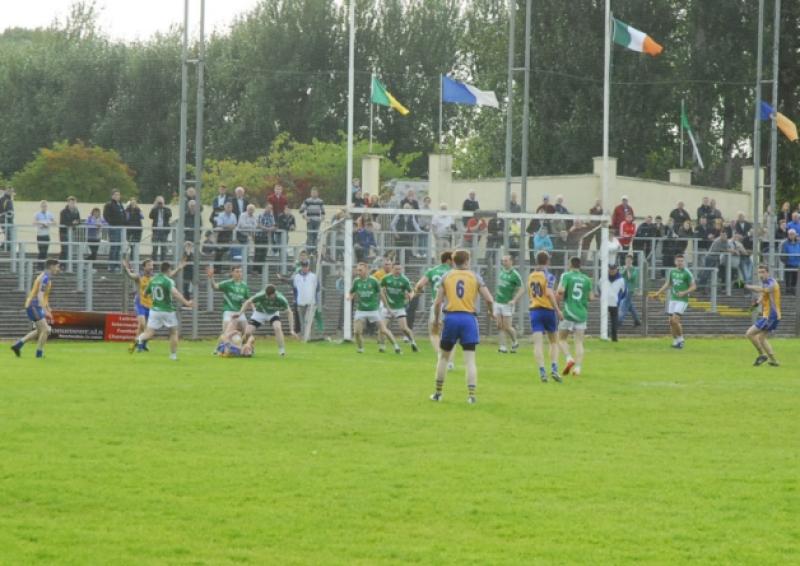 Mohill and Glencar/Manorhamilton will meet again to decide the destination of the Fenagh Cup after Sunday’s Connacht Gold Leitrim Senior Championship Final ended all square with an injury time Conor Dolan free ensuring a replay next Saturday, October 3.

Mohill and Glencar/Manorhamilton will meet again to decide the destination of the Fenagh Cup after Sunday’s Connacht Gold Leitrim Senior Championship Final ended all square with an injury time Conor Dolan free ensuring a replay next Saturday, October 3.

A pulsating and exciting final saw the game swing from team to team, a cracking first half goal from Adrian Croal getting the north Leitrim men back in contention at a time when Mohill were threatening to run away with the game.

Glencar/Manorhamilton then dominated until halftime but never with dominance and when Mohill scored six unanswered points in the second half to open up a four point gap with less than eight minutes to go, the Fenagh Cup looked as if it was its way to Mohill.

But Glencar/Manorhamilton fought back and earned another bite of the cherry thanks to two points from sub Evan Sweeneyn and two late Conor Dolan frees.

Both frees were bitterly disputed by Mohill, the first penalising Ronan Gallagher for a pick-up and the second when Adrian Croal charged straight at a defender, a generous interpretation of obstruction by referee Seamus Mulhern.

However, a draw was probably the fairest result and it leaves both teams with plenty to ponder although you would have to say that Mohill will have large pangs of regret as they looked in a match winning position only to let it slip in the closing minutes.

Credit Glencar/Manorhamilton’s refusal to accept defeat but they will be worried by a lack of performance for long spells in an entertaining and free-flowing encounter.

After early misses for Alan McLoughlin, Keith Beirne and Adrian Croal, James Rooney opened the scoring with a strong burst through the centre after a bad pass to Barry Lupton on four minutes. Two minutes later, Adrian Croal scored a huge point from the corner.

Mohill opened their account when the kickout broke to Shane Quinn and Daniel Beck scored a monster effort less than a minute later. Both sides continued to probe but without much reward but a good run from Ciaran Kennedy and an Alan McLoughlin pass set up Shane Quinn for a fine point to tie the score after 12 minutes.

Mohill took the lead two minutes later, a long ball into Ronan Kennedy worked back to Darren McLoughlin who charged through to point, although Keith Beirne was unmarked off to his side.

Mohill were completely dominant - Danny Beck lost the ball on the run in but Barry Lupton managed to hook the ball over the bar on 15 minutes, a minute later Keith Beirne scored a huge point after being set up by Ronan Kennedy.

But just as Manor were looking in real trouble, a moment of disaster for Mohill and Shane Quinn in particular as Darren Sweeney read his cross-field pass and pounced on the ball, quickly releasing an unmarked Adrian Croal some 40 yards from goal.

The former county man sped in with Mohill’s defence all out and position and buried the ball in the Mohill net for a huge lifeline for Glencar/Manorhamilton.

Mohill responded well with a 50 yard Keith Beirne free but they were obviously shook for the goal, Adrian Croal scoring a huge point on 24 minutes before Manor worked the ball to Darren Sweeney from the kickout and he pointed from some 40 yards to take the lead with five minutes left in the half.

Glencar/Manor were dominating but had two wides as the score read 1-4 to 0-6 at halftime in favour of the north Leitrim men at the break and they quickly extended that lead with a well worked Ronan Flynn point two minutes into the second half.

Niall Brady blazed a shot across the Mohill goal but Glencar/Manor had a real escape when Ronan Kennedy put Shane Quinn charging through on goal only for keeper Colin Gilligan to make a miraculous save to deny Mohill a certain goal.

Keith Beirne saw the resulting fifty hit the post but Ronan Kennedy grabbed the rebound to score but as the Madden brothers, both on as subs, added huge pace to the Mohill game-plan, they started to get a grip on the middle of the field.

And it was Eanna Madden who tied the scores when a throw-ball in the middle of the park, the sub speeding through to score on 15 minutes. A minute later, Keith Beirne fired over another free as Mohill’s pace through the middle caused Manor no end of problems.

Another Bierne free on 20 minutes stretched the lead while Oisin Madden punched a massive hole in the Manor defence, his pass finding Beirne rounding the keeper but his shot went across the face of the goal, sub Keith Keegan helping win the ball back and set up Danny Beck for a point, despite it looking as if the Mohill man lifted the ball off the ground.

Another Eanna Madden run saw Ronan Kennedy run and Mohill looked destined for the title with less than eight minutes ago but sub Evan Sweeney scored a lovely point to start a remarkable Glencar/Manor fight-back.

Lady luck shone on Manor when a poorly hit fifty went to Sweeney who tapped over his second with less than three minutes to go before a controversial free against Ronan Gallagher for a pick-up, when it appeared as if the ball bounced as the Mohill man gathered the ball, saw Conor Dolan score his first point from a free.

Mohill looked as if they had won it when they created an overlap, the shot of sub Ronan Gordon first being indicated as a point by an umpire on the far side of the goal before the near side official ruled it out.

That left the door open for Glencar/Manorhamilton and they appeared to barge it down, Adrian Croal charging forward into contact and referee Seamus Mulhern awarding a controversial free that was converted by Conor Dolan to ensure the 2015 Senior Final ended all square.

• For more analysis and reaction, see this week’s Leitrim Observer, in shops on Wednesday.