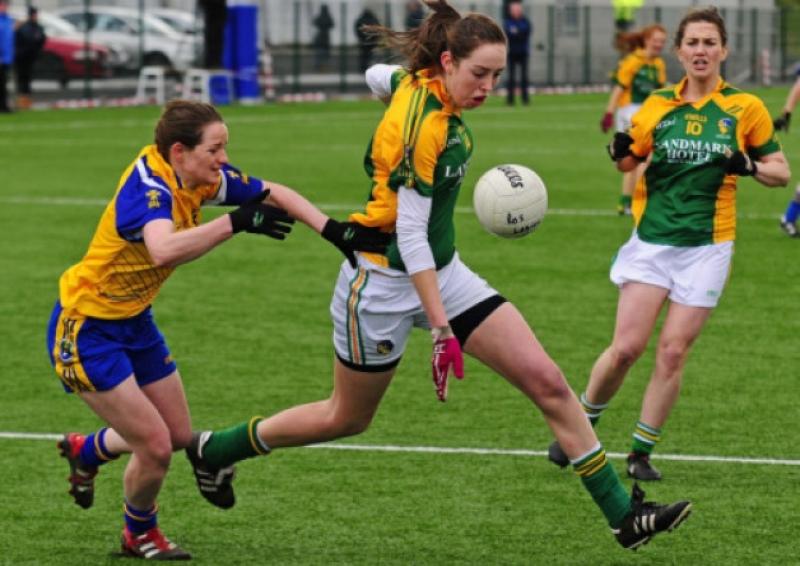 An emerging force may be about to arrive on the Ladies football scene after Division 4 finalists Roscommon proved their mettle to defeat a battling and hard working Leitrim in horrible conditions at the splendid Connacht GAA Centre of Excellence in Ballyhaunis last Sunday.

An emerging force may be about to arrive on the Ladies football scene after Division 4 finalists Roscommon proved their mettle to defeat a battling and hard working Leitrim in horrible conditions at the splendid Connacht GAA Centre of Excellence in Ballyhaunis last Sunday.

Playing at a higher level in the League, Leitrim would have been expected to prove too strong for their neighbours but the progress Roscommon have made over the last 12 months suggests that they are about to emerge as serious players at this level.

Truth be told, Roscommon deserved the win and it was only Leitrim’s sheer will that saw them force extra-time at a wind-swept Ballyhaunis, the Rossies missing a succession of chances as a battling Leitrim worked mightily to hold out against an increasingly dominant Roscommon.

In the first period of extra-time, Roscommon finally made their dominance tell on the score-board as they hit a match winning 1-2 to kill off Leitrim’s challenge.

What made Sunday’s match all the more challenging was the conditions and the ultra-fast Ballyhaunis surface – the ball simply flew with a gale force diagonal wind that made accurate passing difficult and the bounce off the fast surface made it all the faster.

Leitrim started off remarkably well and were five points to the good after just 12 minutes but from there on, the game went from bad to worse for Leitrim as Roscommon narrowed the gap before halftime against the wind and that proved crucial in the end.

Roscommon would have benefitted too from the fact that they had been in action in the Division 4 Final just a week previously and were obviously just a little bit sharper and it told in the second half.

What will worry manager Gerry Ballantine, however, is the apparent loss in form and drive in this team since their first defeat of the year to Armagh in Ballinamore. From then on, Leitrim have struggled to produce their best form and look to be playing like a team without a great deal of confidence.

Leitrim gave little hint of that in the opening minutes as they camped inside the Roscommon half and reeled off points from Erin Farrell (2), Aine Tighe (free), Deirdre Ward and Sinead Fowley, Farrell and Ward scoring particularly impressive points.

However, it started to go wrong for Leitrim as Tighe saw a shot hit the post and go wide as Aidin Ni Dhonnach saw a shot tipped over the bar by keeper Michelle Guckian and Natalie McHugh put over a free, leaving the halftime score at 0-5 to 0-2 in favour of Leitrim.

Two Rachel Ryan points with Roisin Fowley on target for Leitrim before Fowley really went to town. Leitrim broke up a Roscommon attack and after a patient move up the field, Fowley gathered and despite an incredibly tight angle, her shot dipped into the top of the far right corner.

Good work from Aine Heslin set up Fowley for a point that could have easily been a goal but Roscommon weren’t long in responding – first Michelle Guckian made a good save to deny Aine O’Brien but then fortune played a part, a long ball from Jenny Higgins bouncing incredibly high and evading the grasp of Guckian and nestling in the net.

The momentum was definitely with Roscommon and despite seeing two shots hit the post and rebound clear, three McHugh frees saw them draw level with eight minutes to go. The closing minutes were slowed down by an injury to the Roscommon keeper but they looked to have sneaked the win when sub Laura Brudell fired over just seconds into added time.

However, Leitrim weren’t about to lie down and a great point from sub Kiera Keegan over three minutes into added time ensured the game would go to extra-time.

Leitrim opted to play against the wind for the first half of extra-time and Roscommon got off to quick start with an Aine O’Brien point but the real damage was done midway through the half when McHugh’s pass saw O’Brien break clear of the defence to fire a shot to the net.

O’Brien almost had a second goal but Michelle Guckian made another great save to deny a certain goal but another McHugh free gave Roscommon a five point lead, a lead crucially extended to six with an Emer Casey point just 22 seconds into the second half of extra time.

Leitrim kept battling but could never engineer the goal chance they wanted and despite good points from Aine Tighe and Deirdre Ward, another O’Brien point capped off the win for Roscommon.