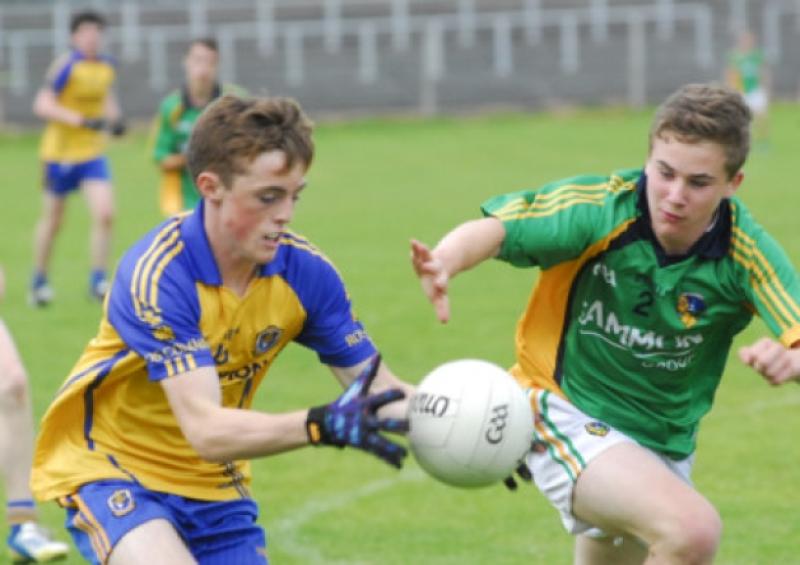 The hype swirling around this year’s Leitrim U-16 team looks more than a little justified after they mauled Roscommon on Wednesday evening.

The hype swirling around this year’s Leitrim U-16 team looks more than a little justified after they mauled Roscommon on Wednesday evening.

Fr Manning Cup games between these two counties have often been close and hard fought affairs but not this one as Leitrim gave their neighbours an almighty beating in Pairc Sean Mac Diarmada.

Leitrim moved the ball quickly and accurately, defended solidly and competed ferociously for every ball in a display that will warm the heart of the family members and the few Leitrim supporters present to witness it.

Leitrim goaled through the impressive Peter Reynolds on seven minutes and from then on, it was a complete cake-walk for the Green & Gold who scored at will against a most untypical Roscommon side, so much so that questions were being asked if the Rossies were actually fielding their best team.

Perhaps Roscommon’s current U-16s are not up to the level of previous teams but it was amazing to see a Roscommon team without the sort of fight and desire to give everything for their jersey that so typifies every Roscommon team.

Roscommon players were making the sort of basic errors, under no pressure at all, that saw them concede 3-7 in the first half with their players seemingly unable to kick accurate passes or find their team-mates with hand-passes.

The amount of times that hungry and focussed Leitrim players intercepted woefully poor hand-passes or kicks out of defence was simply amazing while Roscommon players stood up and let the home team run through them for scores. That may be down to simply facing a better team and anyone doubting that look at the way Armagh ran through a weakened Leitrim in the All-Ireland Qualifiers.

But as much heart Leitrim will take from handing their great rivals such a heavy beating, they must also be wondering if the game served any purpose as there was a hint that Roscommon were holding back players and not fielding their best team, the fact that Roscommon only brought on one sub for an injury with less than two minutes to go making the game all the stranger.

That would be harsh on a Leitrim team who have recorded wins over Sligo and Mayo NW in the Ted Webb Cup and have been working extremely hard for the last two years under their management set-up.

Alan McTigue and Niall McGovern delivered stand-out performances for Leitrim in the middle of the field, they were the platform on which the victory was based, Peter Reynolds was the cutting edge as he tormented the Roscommon full-back with good support from Daniel Hackett, Ryan O’Rourke and Jack Heslin.

Leitrim’s defence didn’t have a lot to do but did it wellw ith Fintan Gallogly and Darren Keegan catching the eye.

Taking a critical eye to the display, there would be a worry that Leitrim missed a few easy chances under no pressure in the second half but it would be slight nit-picking after a heart-warming display.

Stiffer tests await and Leitrim face a strong Kildare side in the Fr. Manning Cup next Monday evening, July 29, at 7.30 in Pairc Sean and anyone with a real interest in the future of Leitrim football would do well to be there.

Peter Reynolds opened the scoring with a free after 50 seconds but Roscommon enjoyed the better of the next five minutes as they had two or three chances that came to nought.

However, the game was as good as up when Reynolds tapped the ball to the net from a Jack Heslin cross as the Roscommon keeper was badly caught out and despite a free from Roscommon’s Christy Leahy, the Leitrim pair reversed roles with Reynolds intercepting and passing to Heslin who soloed in and finished well under pressure.

Ryan O’Rorurke (2), Reynolds and Daniel Hackett all added points as Roscommon couldn’t clear their lines before a high ball in found Ryan O’Rourke in acres of space and he blasted to the net.

Robbie Cunningham added a point as Leitrim led 3-7 to 0-1 at the break. Naturally the second half lacked the intensity of the first as Roscommon and Leitrim scored three points apiece, Jamie Stenson and Peter Reynolds scoring in the first six minutes.James Tully fisted over as both sides missed good goal chances while Roscommon keeper Regan Fahy denied Hackett a goal.

That Reynolds point was Leitrim’s last with 19 minutes to go but there was truly little action, Roscommon managing just two points in the final ten minutes.