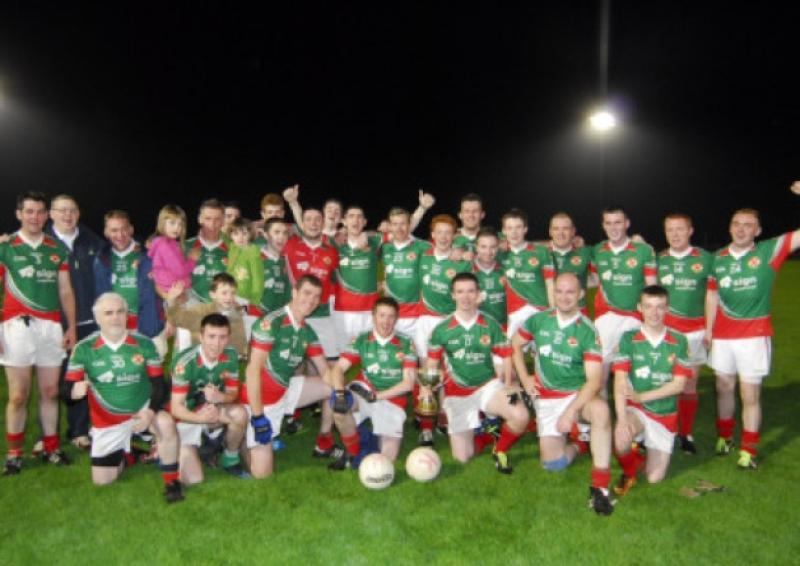 It may have been under lights but Friday’s GWP Junor B Championship Final failed to really light up as Kiltubrid held out for the win.

It may have been under lights but Friday’s GWP Junor B Championship Final failed to really light up as Kiltubrid held out for the win.

Dara McKiernan’s goal just five minutes into the game seemed to promise a high scoring encounter but instead we got a game where both teams displayed plenty of endeavour but lacked the killer instinct.

Both teams wasted a host of good chances to take their scores in a game that failed to fully take hold.

Kiltubrid looked the more accomplished side in the first half and should have been fair further ahead at the break but their profligacy in front of the posts almost cost them.

Aughavas came far more into the game in the second half, boosted after a bizzare episode of a sending off for Kiltubrid that didn’t happened for almost ten minutes.

Kiltubrid’s Brendan McCormack received a second yellow card eight minutes into the second half but was not shown a red card by referee Frank Niblock. McCormack continued to play before Kiltubrid took him off under the blood sub rule and then tried to substitute him later before he was eventually put off the field of play.

Whether McCormack’s presence on the field for nine extra minutes made an apreciable difference is hard to know but with an extra body, Aughavas launched attack after attack and came close on a couple of occasions to snatching the goal they so desperately needed.

After both sides had wides, Dara McKiernan got the game off to a blistering start when he beat his man to a high ball and advanced to place a smart shot in the Aughavas net.

Kiltubrid threatened to take over completely but they missed a good few chances and Aughavas slowly got themselves back into contention with points from Padraig McLoughlin and Colin McKiernan.

David McCormack scored from long range on 15 minutes but Aughavas hit three bad wides while Seamus Colreavy made a timely block on McKiernan, the former County man pointing on 25 minutes.

With both sides hitting poor wides, the halftime score stood at 1-2 to 0-2 at the break but Padraig McLoughlin soon pointed a free. Kiltubrid keeper Kieran Murray made a vital save to deny Keith Conefrey a goal on three minutes.

Dara McKiernan replied with a free before McCormack got his second yellow card but did not depart the action.

Kiltubrid had a few bad wides of their own before Ross Williams made a good save to deny McKiernan a second goal, McKiernan adding a free on 45 minutes.

That was Kiltubrid’s last score but Colin McKiernan scored a massive long range effort to keep the pressure on just a minute later.

With the extra man, Aughavas went looking for a goal but could only manage an amazing effort from Colin McKiernan score that seemed to curl in from an impossible angle.