After the pain of defeat last year ...
REDEMPTION for St Manchans 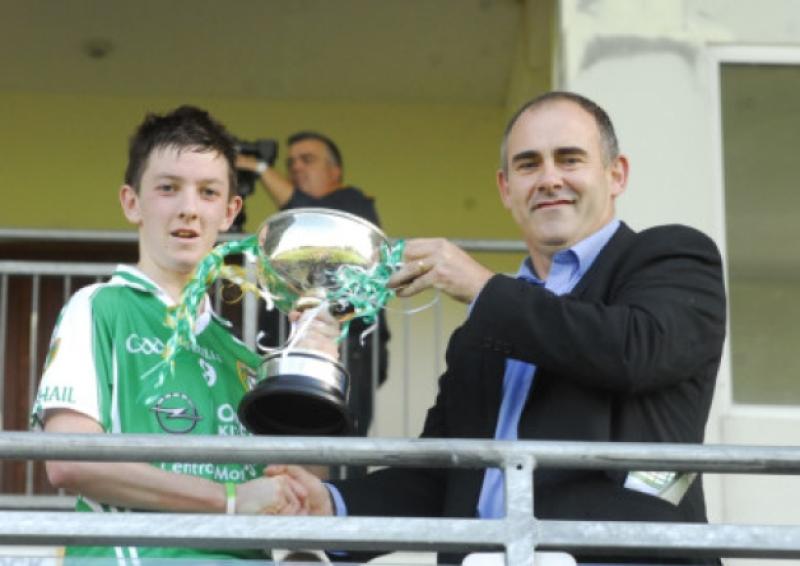 The strength, flair and skill of the St Manchans team has been well documented in recent years and now they are the minor champions.

The strength, flair and skill of the St Manchans team has been well documented in recent years and now they are the minor champions.

The game against Ballinamore Sean O’Heslins proved to be an absorbing encounter with both sides giving their all in a game that ebbed and flowed over the course of 60 minutes.

Ballinamore were the quicker to settle and brought the game to their opponents who entered the contest as favourites.

With Niall McGovern operating from a deep position Ballinamore had a platform to secure possession.

Peter Reynolds, who has had an excellent year with the county U-16 team gave an indication of his ability when he registered the game’s opening score with a fine point.

The good start was to get even better for Ballinamore when they struck for the game’s opening goal in the fifth minute. Conor Moran raced on to a long ball over the Ballinamore defence and having evaded the challenge of St Manchans goalkeeper Jason Farry, Moran showed good plenty of composure to find the goal despite two defenders being on the line.

Being hot favourites for a final can bring added pressures and St Manchans task became more difficult when Michael Bohan was withdrawn with an injury in the early stages.

Two excellent points from Kevin Mullen and Peter Reynolds extended the lead and even though it was still early in the game it was looking as though St Manchans may be in slight trouble.

However, St Manchans showed their ability and abundance of character as they dominated the second quarter as they held Ballinamore scoreless and dragged themselves right back into contention.

Keith Keegan punished a stray clearance with an excellent point but it wasn’t until the final three minutes of the half that St Manchans really began to turn the screw.

Before those closing moments Ballinamore almost struck for a second goal but Oisin McCaffrey’s effort with two outstretched hands was just wide of the St Manchans goal.

With three minutes of the half left and trailing by four, St Manchans’ Jamie Stenson and the excellent Keith Beirne pointed in quick succession and then with just a minute of the half remaining St Manchans struck for a decisive goal.

Fiachra McGuinness timed his offload into the path of Keith Keegan perfectly and Keegan dispatched his shot past Cian McCaffrey with real authority.

With all the momentum behind them St Manchans finished the first half on a high with an excellent Keith Beirne point and deep in injury time the same player completed the first half scoring with a free.

Trailing 1-6 to 1-3 the game was certainly not beyond Ballinamore but given the way St Manchans finished the first half it looked as though they would be facing an uphill battle.

However, they showed great character at the start of the half with points within five minutes from Kevin Mullen, Luke Murphy and Peter Reynolds levelling matters.

When they needed a score to regain composure St Manchans’ Ronan Gordon scored from a tight angle to regain the lead and they then struck for their second goal.

Jamie Stenson’s delivery was cleverly knocked into the path of Fiachra McGuinness by Shane McGowan and McGuinness applied a good finish to open up a four point lead.

It was to get even better for St Manchans minutes later when man of the match Oisin Madden sidestepped a defender before beating Cian McCaffrey with a fine shot.

While Madden was excellent going forward, it was his role in dealing with Peter Reynolds that was particularly crucial in his side’s success.

To their credit Ballinamore refused to throw in the towel and got back in contention with 18 minutes remaining when Oisin McCaffrey goaled from close range after Peter Reynolds and Niall McGovern combined well.

As the game progressed the effort they put into the contest evidently took its toll on the Ballinamore players. At one stage in play there were three players receiving treatment for cramp and four unanswered points extended the lead before they completed the scoring with a Keith Beirne goal in injury time.