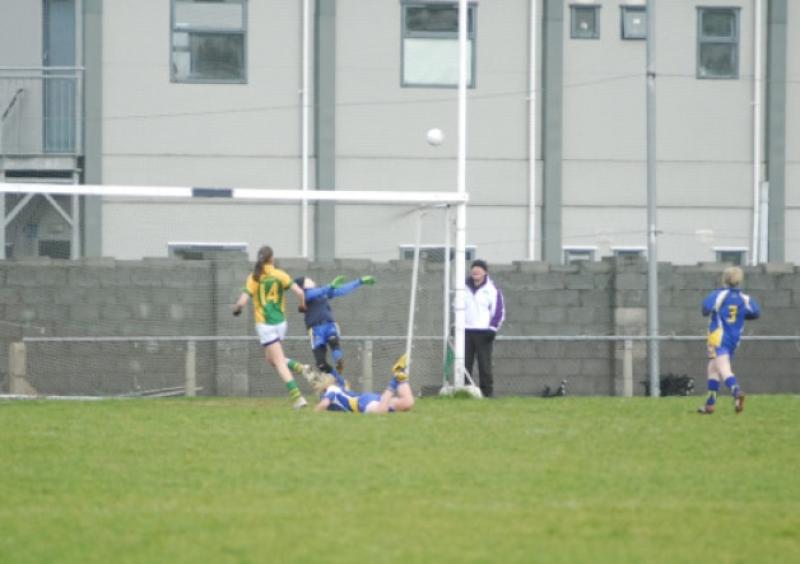 Leitrim ladies followed in the steps of their male counterparts last Sunday when they comfortably maintained their unbeaten start to 2014.

Leitrim ladies followed in the steps of their male counterparts last Sunday when they comfortably maintained their unbeaten start to 2014.

Having already defeated Sligo, Leitrim proved too strong for Longford when the sides met in Pairc Naomh Mhuire on Sunday afternoon.

A nine point lead at the interval was a reflection of the home side’s dominance during the opening half as Longford struggled to cope with the work rate of the Leitrim players who hassled and harried for possession before applying clinical finishes in front of goal.

While they had little to be excited about in the opening half, Longford should have taken an early lead but saw two frees in the opening minutes from Claire Greene miss the target.

Those misses were punished by the ever-reliable Aine Tighe who converted two frees and it got better for Leitrim when they struck in the eight minute for the game’s opening goal.

Michelle Heslin appeared to be fouled by the Longford goalkeeper but Roisin Fowley showed good awareness and composure to secure the loose ball and found the net from close range.

Sarah McLoughlin and Deirdre Ward were winning possession in midfield and the likes of Anna Conlan and Enya McWeeney always seemed to be on hand either to make a challenge or to make themselves available for a pass.

A further Aine Tighe free extended the deficit further and she was desperately unlucky not to score Leitrim’s second goal when she unleashed a powerful shot. However, Longford goalkeeper Michelle Kilkenny did well to turn the ball over the bar. That proved to be the final score of the half with Leitrim leading 1-6 to no score as the break.

Five frees, all converted by Claire Greene brought Longford back into contention but the Leitrim full-back line was proving to be resolute and nothing easy was being offered up.

Victory was secured with 12 minutes remaining when Clare Owens found Aine Heslin with a superb pass and she struck for Leitrim’s second goal.

Longford replied with another Claire Greene free but there was no sign of Leitrim easing up in the closing stages and Aine Tighe registered a further two points (one free) before she turned provider for Aileen Maguire who pointed.

With just two minutes remaining Sarah Tierney registered her side’s first point from play but it was Leitrim who would have the final say as substitute Aileen Maguire completed an impressive cameo with her second point.