Ladies miss out on Final place 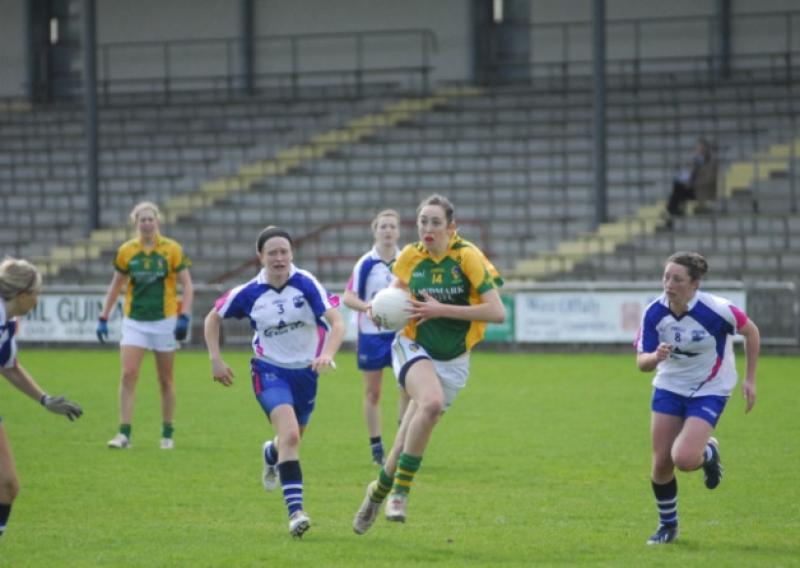 The goal of reaching the Division 3 Final came to an end on Sunday last in Birr when Waterford came from behind to get the better of Leitrim.

The goal of reaching the Division 3 Final came to an end on Sunday last in Birr when Waterford came from behind to get the better of Leitrim.

For much of the game Leitrim looked the more likely to advance to a final against Armagh but a late surge from Waterford was enough to see them over the line meaning attention for Martin Dolan’s team now turns to next weekend’s Championship match against Sligo.

Despite playing against a strong wind Leitrim brought the game to their opponents and a two point lead at the break was encouraging but Waterford demonstrated their strength in the second half as a number of their substitutes played a pivotal role in their comeback.

The fact that there was only 10 minutes remaining when Waterford took the lead for the first time made defeat harder to take for the Leitrim contingent in Birr.

The game began with Leitrim taking the game to Waterford and in the second minute Leitrim had their first sight of goal but Roisin Fowley’s shot was blocked for a 45. That 45 was played short to Aine Tighe and the full-forward scored the afternoon’s opening point.

Two further Aine Tighe points, one from a free, further extended the lead as Waterford struggled to make an impact.

After some wayward shooting Waterford showed their teeth in attacking sense. First they opened their account when Michelle Ryan converted a free and they then hit the crossbar twice in quick succession.

With the wind at their backs Waterford levelled matters with fine points from Michelle Ryan and Elaine Power but Leitrim weathered that storm and soon retook the lead.

Roisin Fowley and Claire Owens combined to create a shooting opportunity for Michelle Heslin who took her chance very well and with seven minutes of the half remaining it got even better for Leitrim.

Aine Tighe exchanged passes with her sister Niamh as the defence was carved open and then released Roisin Fowley who made no mistake with an accomplished finish to the Waterford goal.

The competitive nature of the game continued with Waterford replying with points from Michelle Ryan (free) and Linda Wall.

An Aine Tighe pointed free with four minutes of the half remaining left a goal between the sides but again Waterford replied, this time with points from Linda Wall and another Michelle Ryan free.

The first half scoring was completed when Aine Tighe converted a late free and as the sides left the pitch with Leitrim leading 1-6 to 0-7 there was cetainly cause for optimism.

An excellent Sarah McLoughlin point within two minutes of the restart gave further hope to the Leitrim supporters but a minute later Waterford were back on level terms.

Aileen, Mairead and Linda Wall linked up very well and Linda dispatched her shot, via the crossbar, to the Leitrim goal.

To their credit Leitrim responded well to that setback with three points from Aine Tighe, two of which were frees, the other an excellent shot from distance.

After Aileen Wall reduced the deficit to two points Waterford introduced Hannah Landers and she had an immediate impact. After creating a scoring opportunity for Aileen Wall which was duly taken she then scored to level matters with 17 minutes remaining.

Leitrim regained the lead when Michelle Heslin pointed after Aine Tighe’s free came back off the upright but again Waterford’s reply was impressive and they levelled matters again when Mairead Wall pointed.

With 10 minutes remaining Waterford took the lead for the first time when the excellent Michelle Ryan pointed.

This time it was Leitrim’s turn to reply and they weren’t to be found wanting as Aine Tighe converted a free to ensure the sides were level for the sixth time with just seven minutes left.

Unfortunately that was to be as good as it would get for Leitrim as Shauna Dunphy struck for Waterford’s second goal and with the game almost over and Leitrim fighting for a goal that could force extra time, Waterford pounced for a match winning third goal when Michelle Ryan goaled after her initial free came back to her after striking the upright.