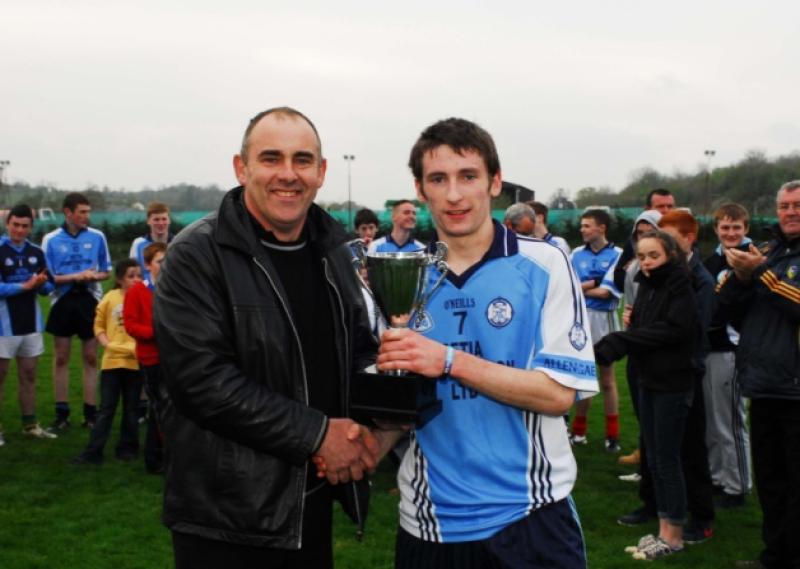 Although they had the advantage of a strong breeze in the opening half the elements could not be credited for St Francis’ success as the Allen Gaels and Ballinaglera amalgamation proved much too strong for Fenagh.

The midfield pairing of Kevin Moran and Padraig Clarke proved to be the platform for St Francis’ success and further up the field Ciaran Walsh, Caleb Duffy and Wayne Reynolds impressed.

The game began with St Francis looking particularly dangerous and they deservedly opened the scoring when Caleb Duffy pointed.

If that score was deserved there was an element of fortune surrounding the next score as Ciaran Walsh saw his effort bounce fortuitously over the head of the unlucky Fenagh goalkeeper and into the goal.

Having made a slow start Fenagh would have been hoping for a quick reply but unfortunately for them that did not materialise as St Francis took less than a minute to register their second goal.

Jarlath Scollan did very well to save Wayne Reynolds’ shot but he was powerless to prevent Caleb Duffy from finding the net with the rebound.

The game was almost nine minutes old before Fenagh registered their first score when Ryan O’Rourke, who had a fine game, pointed after Caillin O’Rourke’s pass.

That was not to signal the start of a comeback as Ciaran Walsh struck for St Francis’ third goal after an excellent counter-attack and barely a minute later Wayne Reynolds was on target for his side’s fourth goal.

With St Francis now well on course for victory they further extended their lead with three points from Wayne Reynolds and another from Caleb Duffy meaning they had a commanding 4-6 to 0-1 lead at the interval.

If they were to have any hope of staging a comeback Fenagh needed a strong start to the second half but instead it was St Francis who registered the first score when the game resumed with Kevin Moran on target after his midfield partner Padraig Clarke created the opportunity.

Fenagh replied with a clever 45 which was played to Tony Simms who pointed.

St Francis looked determined to ensure there would be no heroic comeback and they replied with points in quick succession from Alan McTigue, Caleb Duffy, Ciaran Walsh and Kevin Moran.

The loyal Fenagh supporters had reason to cheer when Jack Gilheaney scored an excellent point but unfortunately for them it was almost immediately cancelled out by an Wayne Reynolds free.

To their credit Fenagh kept persevering and that effort was rewarded in the closing stages as a Tony Simms point was followed by three successful Ryan O’Rourke frees but St Francis’ lead was never in danger and they saw out the game for a deserved win.