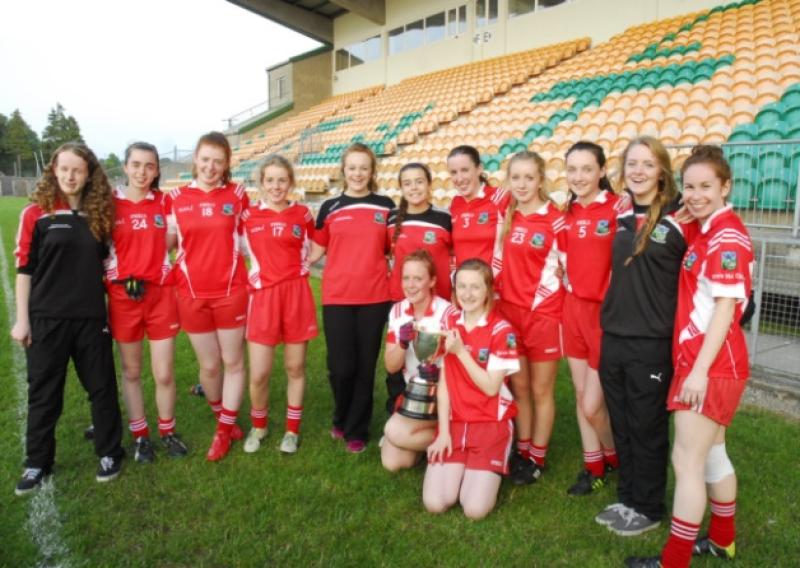 If a birthday wasn’t enough of a reason to celebrate, Sinead Fowley gave a dominant display to lead Dromahair to the Ladies Senior Championship title and a Player of the Match award.

If a birthday wasn’t enough of a reason to celebrate, Sinead Fowley gave a dominant display to lead Dromahair to the Ladies Senior Championship title and a Player of the Match award.

Long a stalwart of the County team, Sinead Fowley showed Leitrim just what they are missing as she turned in a fantastic display in the middle of the park, her amazing non-stop running and ferocious commitment typical of an inspired Dromahair team performance.

In a match that ebbed and flowed both ways, Dromahair hit a purple patch midway through this contest as they scored 4-4 in a stunning 17 minute spell that left St. Joseph’s shocked and bewildered as their four point lead was turned into an eight point deficit.

Dromahair’s approach to the game made the most of their talents - Erin Farrell and Joice Cunningham were withdrawn to provide extra bodies in defence and clog up the impressive St. Joseph’s attack, Farrell one of those players who were contention for the Player of the Match award.

With Anna Conlan also playing deep, St. Joseph’s found it very hard to make any headway and the room left in attack was brilliantly exploited by the Dromahair attack where Roisin & Mairead Fowley and Roisin Curneen used their pace, intricate passing and team-work to keep St. Joseph’s on the back foot.

But it was the birthday girl Sinead Fowley who ran the show as St. Joseph’s simply weren’t able to stop her as despite her diminutive size, Fowley burst through heavy tackles time and time again to drive her team forward.

Not far behind Fowley was keeper Mary Clancy who made a couple of fantastic saves to prevent certain St Joseph’s goals, the second of which midway through the second half was undoubtedly the winning the game.

You have to credit Dromahair’s resilience by the way they coped with the sending off of Mary Farrell and an even later yellow for Roisin Fowley but they still held on despite St. Joseph’s best efforts.

St. Joseph’s didn’t make excuses but it was obvious that Aine Heslin was still badly hampered by the injury she suffered in the semi-final while they also lost Philippa Maguire in the first half.

Bronagh O’Rourke was a real handful for Dromahair while Clare Owens, Sharon Kerrigan and Michelle Heslin were best for a St. Joseph’s team that never hit top form.

St. Joseph’s started off best but saw a few missed chances while Dromahair keeper Mary Clancy made a huge save to deny Michelle Heslin a goal after three minutes.

St. Joseph’s did, however, start best with points from Carmel McGovern, Bronagh O’Rourke and Michelle Heslin in the first 11 minutes with a point from Sinead Fowley in response.

Mairead Fowley pulled back a point but St. Joseph’s looked on their way when Michelle Heslin gathered a high ball on the edge of the square, turned and forced the ball to the Dromahair net on 18 minutes.

With a four point lead, St. Joseph’s next score five minutes later would see them a goal down as Dromahair found their form in devastating fashion. Mairead & Roisin Fowley pointed before a poor kickout saw Roisin Curneen gather and run in to score at her ease.

Two minutes later, Sinead Fowley took the ball in the middle of the park and surged forward, holding off a tackle before blasting home for a second goal.

O’Rourke halted Dromahair’s scoring spree but Roisin Fowley pointed after a run from her sister Sinead to leave the halftime score at 2-5 to 1-4.

Dromahair continued in the second half where they left off in the first as Anna Conlan soloed in from midfield to point before she turned provider to set up Roisin Fowley for a third Dromahair goal after three minutes.

Bronagh O’Rourke pulled back a free but Roisin Fowley’s pass found Mairead Fowley and her great finish put Dromahair eight points clear but it was a short-lived gap as a high ball into the Dromahair goalmouth saw Carmel McCartin challenge, the ball breaking and hitting the post before McCartin punched the ball home.

O’Rourke scored a great point on the turn but the turning point came midway through the half when Mary Clancy made a huge save to deny Michelle Heslin a goal while Aine Heslin couldn’t get to the rebound.

St. Joseph’s had their own lucky escape as a Roisin Fowley shot was saved on the line by Marina Gray but a nice point from Deirdre Moran kept the pressure on.

The game took a major turn when Mary Farrell received a straight red card for an attempted kick at a St. Joseph’s player, Bronagh O’Rourke converting the free.

With Dromahair under increasing pressure, both teams missed chances while Roisin Fowley was yellow carded for a tired and silly foul that reduced Dromahair to 13 players for the final minutes.

St. Joseph’s kept pushing for a score but all they could manage was a late point from Michelle Heslin as Dromahair held on for a three point win.