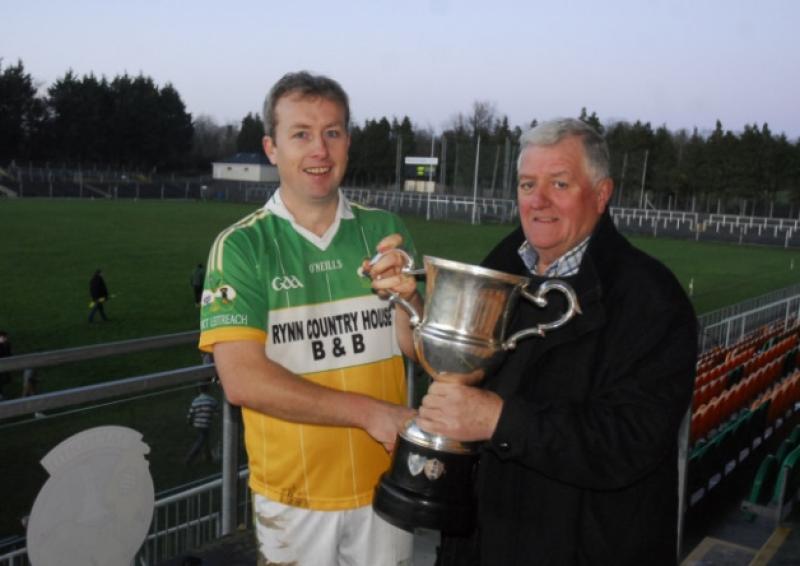 November may not be a month normally associated with epic football matches but last Sunday’s Gallogly Catering Division 3 Final proved to be a thriller, with extra-time ultimately needed to separate the sides.

November may not be a month normally associated with epic football matches but last Sunday’s Gallogly Catering Division 3 Final proved to be a thriller, with extra-time ultimately needed to separate the sides.

Long before the dramatic finale the deadlock was broken with Peter Reynolds converting a free to give Ballinamore an early lead but that was soon cancelled out by a Neill Quinn point from play.

With the game struggling to fully burst into life during the opening quarter Gortletteragh took the lead for the first time when Barry Tiernan pointed but saw further chances to extend their lead sail harmlessly wide.

Having struggled to assert themselves in the game, Ballinamore announced their arrival when they struck a 13th minute goal. Brian Beirne’s dangerous delivery caused untold problems for the Gortletteragh defence and team captain Anthony McTague was on hand to goal from close range.

Points in quick succession from Brian Beirne and Brian Leydon extended the Ballinamore lead to four points but just when it seemed as though Ballinamore were beginning to move through the gears, Gortletteragh came roaring back in the final 10 minutes of the half.

Francie Flynn converted a free before Gortletteragh struck for their first goal of the game.

Barry Tiernan, Neill Quinn and Gavin Mitchell all combined close to the Ballinamore goal and after Mitchell’s shot hit the crossbar he was on hand to dispatch the ball to the net from close range.

Ballinamore responded well with a fine Brian Beirne point but it was to be Gortletteragh who would complete the first half scoring with points from Sean Costello, Francie Flynn (free) and an excellent individual score from Jack Heslin meaning Gortletteragh led 1-6 to 1-4 as the teams left the field at half time.

The second half began with Peter Reynolds pointing to reduce the deficit to just a point and although Gortletteragh replied with a Barry Tiernan point, it was the Ballinamore men who were looking the more dangerous.

Brian Beirne pointed again after good play involving Peter Reynolds and Dean McGovern and that was followed by an Anthony McTague point to level matters once more.

The final 15 minutes of the second half was once again full of drama, action and excitement and Gortletteragh edged back in front with points in quick succession from Gavin Mitchell and a Francie Flynn free.

Despite the near freezing conditions, there was no sign of either side going down without a fight and Ballinamore got back on level terms with points from Luke Murphy and a Peter Reynolds free.

With just seven minutes left, extra-time was now beginning to look like a very real possibility but Gortletteragh seemed to have other ideas as they brought Jack Heslin further out the field once more and once again he had an impact with a terrific shot from distance sailing between the uprights

That score was followed by a point from another of Gortletteragh’s star performers, Neill Quinn, and with just three minutes remaining it was beginning to look as though it would be Gortletteragh’s day.

However, Ballinamore were not yet finished and Luke Murphy’s free left just the bare minimum between the sides before Donal Feeley showed incredible composure, confidence and accuracy to point deep into injury time to level matters.

With the momentum all with Ballinamore, it seemed as though they may yet win the game without the need for extra-time but time was against them and a further 20 minutes was required to separate the sides.

Any thoughts that Gortletteragh had run out of legs were dismissed as soon as extra-time got underway and three minutes after the restart they had scored their second goal of the game. Jack Heslin attracted three defenders to him but he had the awareness to find the unmarked Gavin Mitchell who dispatched his shot confidently.

Over the remainder of the first period of extra-time, Gortletteragh outscored their opponents 0-3 to 0-2, including a penalty that Neill Quinn slotted over the bar to give them a 2-14 to 1-13 lead as the whistle sounded for half-time in extra-time.

Peter Reynolds (free) and Ryan Gavin pointed for Ballinamore to reduce the deficit but those scores were almost immediately cancelled out by a Jack Heslin free and an excellent point from the boot of Gavin Mitchell.

With 30 seconds remaining Ballinamore founds themselves right back in contention when Brian Beirne reacted quickest to a ball pumped towards the Gortletteragh goalmouth and his emphatic strike found the net.

Less than a minute later Ballinamore fans were out of their seats once more when Beirne’s shot rebounded off the upright and the rebound fell kindly for Peter Reynolds. With the result of the game hanging on Reynolds’ shot it took a save of real quality from Gortletteragh goalkeeper Sean Bohan to keep the well hit shot at bay and ensure victory for Gortletteragh.