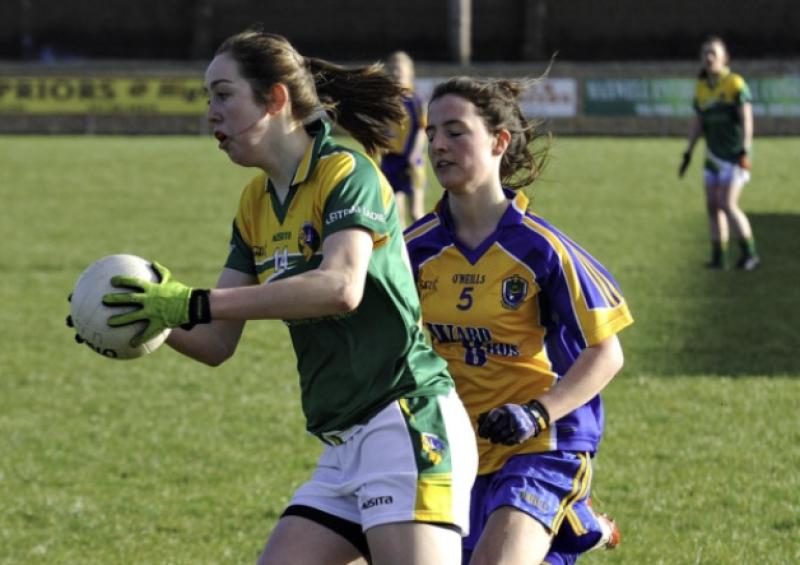 The first half saw Leitrim play with an intensity Roscommon struggled to contend with and it didn’t take long for Leitrim to have that early dominance reflected on the scoreboard.

New Leitrim manager Pat Costello introduced some new faces to the Leitrim line-up but the team was backboned by experienced competitors and that ultimately played a big part in Sunday’s win.

Despite Leitrim’s first half dominance, it was actually Roscommon who started the brighter as they found Leitrim not fully up to speed when the ball was thrown-in and within 30 seconds Roscommon had a sight of goal but Michelle Guckian was on hand to deny Sile Brady.

Leitrim opened the scoring from an Aine Tighe free but that was almost immediately cancelled out by a Jenny Downey free.

With the game still barely five minutes old Leitrim stepped up the level of intensity in their play.

A quick Aine Tighe free towards Emma Guckian was quickly returned to the full-forward with Tighe effortlessly slotting the ball over the bar.

The dominance Leitrim were enjoying was reflected on the scoreline when Leitrim struck for a seventh minute goal although there may have been an element of good fortune involved.

Aine Tighe struck a shot which looped over the Roscommon goalkeeper and then dipped under the crossbar and into the goal.

Two minutes later the green flag was waved again, with Aine Tighe once again responsible for Roscommon’s misery. Her free was lofted in the direction of Emma Guckian but eluded everybody and dropped straight into the goal.

While Aine Tighe was doing the damage in terms of scoring, those operating in the corners, Ailbhe Clancy and Carla LeGuen were working tirelessly and after good work from Niamh Tighe, Clancy pointed to further extend Leitrim’s lead.

Trailing by eight points after 11 minutes, Roscommon could have been forgiven for thinking they had a long afternoon in store but they remained focused and began the task of reducing the deficit.

Two frees from Jenny Downey helped restore some belief into the Roscommon ranks but those scores were cancelled out by points from Emma Guckian and Aileen Maguire.

After Downey and Aine Tighe exchanged pointed frees, Roscommon enjoyed a period of pressure as Laura Fleming scored an excellent point from distance and then Rachel Ryan pointed.

The significance of a Michelle Guckian save to deny Deirdre Regan was emphasised when Aine Tighe struck for Leitrim’s third goal and this time there was no element of luck involved.

Ailbhe Clancy, Sarah McLoughlin and Carla LeGuen linked up well and when the ball was worked to Aine Tighe she showed plenty of composure and a deft touch to dispatch her shot to the Roscommon goal.

There was still time for both sides to register a point apiece with Deirdre Ward scoring for Leitrim and Joanne Cregg on target for Roscommon meaning Leitrim enjoyed a 3-7 to 0-7 lead at the interval.

The second half didn’t quite reach the same levels of fluidity from a Leitrim point of view with the introduction of a number of substitutes possibly effecting the cohesion of the team.

After Aine Tighe opened the second half scoring, Roscommon struck for their first goal, 10 minutes after the restart. Leitrim failed to defend a quickly taken free and after a series of quick passes, Martina Freyne was on hand to pounce.

Sarah McLoughlin’s point midway through the half seemed to settle Leitrim but there were signs they were struggling to recapture the attacking style of play which had been so effective in the first half.

With 10 minutes remaining Laura McLoone found the Leitrim net, despite the fact that she was slipping as she shot and barely a minute later Roscommon struck again with Martina Freyne scoring her second goal of the game.

With the deficit now reduced to just two points and eight minutes still remaining there was a concern that Leitrim were in trouble.

However, such concerns proved to be ill-founded as Leitrim immediately hit back. This time Aine Tighe turned provider as she found Dearbhaile Beirne who struck an unstoppable finish to all but put the result beyond doubt.

Points from Aine Tighe free and Deirdre Ward either side of a Deirdre Regan point for Roscommon completed the afternoon’s scoring on what was a convincing win for Leitrim but they will know there is room for improvement on their second half display.