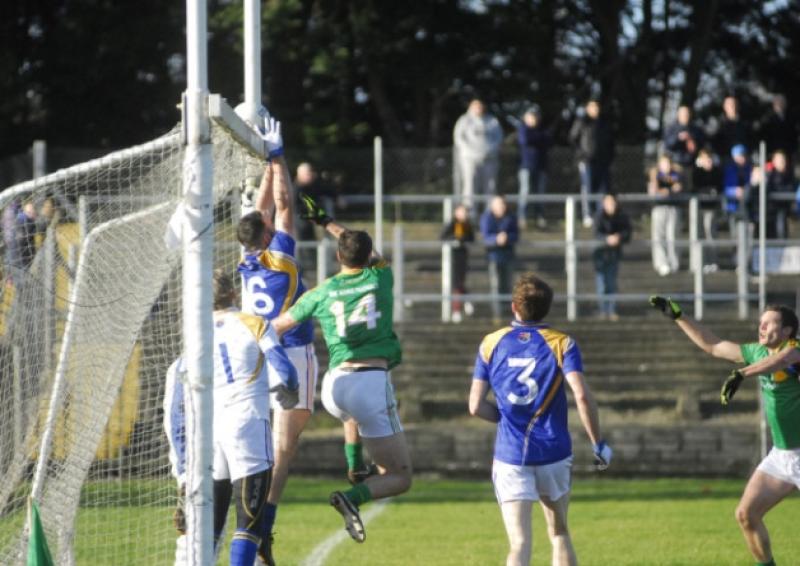 The mixed emotions for Leitrim fans are completely understandable as a vital victory in the first Allianz Leauge Division 4 game of the year was snatched from Shane Ward’s grasp but a new look Leitrim team showed enough to suggest that this could be a very interesting year yet.

One League point, particularly with the draw between Antrim and Carlow, could prove huge at the end of the campaign and coming out of a game against a side tipped by a lot of the national media as one of the favourites for promotion is very definitely a plus, even if the mood among the Leitrim players and management seemed sombre after the game.

The happiness will come from impressive displays from Donal Wrynn who tormented the Longford full-back line and keeper all day and James McGrail who combined with Paddy McGowan to dominate the middle of the park for three quarters of this contest.

And as a manager, Shane Ward will surely be delighted by the deliberate, thoughtful Leitrim play throughout the game - always looking to find the man in space, the team-mate better positioned and the way Leitrim spread the field and created space for Wrynn, Fergal Clancy, Kevin Conlan and McGrail to exploit was very encouraging.

The impact of new players like Ciaran Gilheany, scorer of two fine points, McGrail and Conor Farrell is another major plus for Ward as seven players in total made their national league debuts.

But equally important was the influence of the older, more experienced backbone of the team with Danny Beck, Gary Reynolds, Cathal McCrann, Clancy, Conlan and Sean McWeeney exerting considerable influence on the contest, their experience key to the more patient and deliberate game-plan being introduced by Ward.

The performance was a considerable step-up from the Leitrim displays in the FBD League as the Green & Gold operated with a clear and defined game-plan and the way Ward’s team exploited space in the wing, found team-mates with short pop passes and recycled possession, turning back in the tackle to find a team-mate was very noticeable.

Some of the scores worked by Leitrim were exceptional, Kevin Conlan scoring two efforts in the second half that were simply top class while Leitrim’s support play and energy was impressive.

The disappointment was natural because Leitrim seemed to have opened match winning gaps twice during the second half, once they went five points clear and again when Conlan and Clancy hit two huge points inside the last five minutes.

And there were a couple of poor choices when it came to shots and passes in the last quarter when Longford started to dominate, decisions that must have riled the manager as possession was lost cheaply or wasted.

And it is worrying that Longford created four clear goal chances, apart from Sean McCormack’s net buster, that should have been converted.

They they weren’t converted was down to two wonderful Cathal McCrann saves and the Gortletteragh man’s return to the posts probably saved Leitrim from defeat. McCrann had ambitions of appearing as an outfield player but there is nobody that matchesh his influence on this Leitrim team.

McCrann is simply the quarter-back, Leitrim’s Stephen Cluxton, as his kickouts and distribution give Leitrim a massive advantage.

And it was those four goal chances that contribute to the sense of relief among Leitrim fans - Longford trailed by just two points at halftime but missed a great goal chance and put two frees wide while another three chances went abegging during the second half.

Longford, however, were definitely on the ropes when Leitrim went five points clear but it must be worrying to the Leitrim management the way Longford dominated possession in the closing quarter, charging forward time and time again.

Leitrim’s defence buckled but did not break as Danny Beck and Gary Reynolds stood tall and the Leitrim defence showed a lot of discipline in the tackle.

And as easy as it is to be wise after the event, the abscene of Donal Wrynn and James McGrail in the closing stages was sorely felt as both were replaced. It may be that both had simply given their all and were running on empty but Wrynn’s outlet for the long ball and McGrail’s physical presence were sorely missed.

Relief came from the fact that, in all honesty, Longford should have stolen the win with three great chances in injury time but it would have been an incredibly cruel God that would have done that to this fantastic Leitrim effort.

For a Leitrim team that is shorn of so many key players of the last five years, that is building a new base and a new vision, Sunday’s draw was a major step towards that new future. It won’t be easy and manager Shane Ward was the first to call for patience last Sunday but perhaps, just perhaps, Leitrim might be starting to look towards a brighter future.