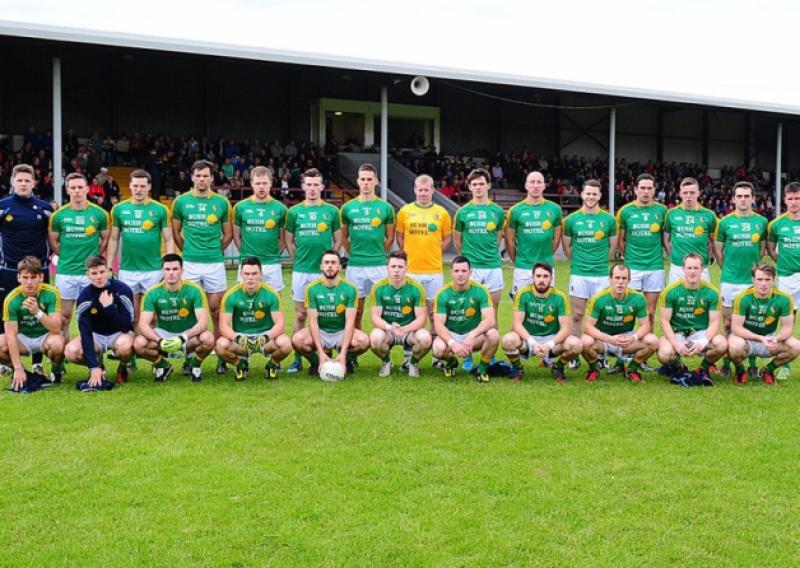 The greater scoring power of Louth proved crucial as they overwhelmed a battling Leitrim last Saturday in Drogheda in the All-Ireland Fotoball Championship Qualifiers.

The greater scoring power of Louth proved crucial as they overwhelmed a battling Leitrim last Saturday in Drogheda in the All-Ireland Fotoball Championship Qualifiers.

Leitrim went into the game confident they could end the wait for a second win in the Qualifier series but they found a Louth team just as enthused at the prospect of meeting the Green & Gold and just as determined to take something from the championship.

With the start of the game delayed to crowd congestion, a large Leitrim crowd made the journey in obvious hope of a championship victory but they were left frustrated as Louth produced a high scoring display and prevented Leitrim’s attack from making any real headway.

Louth had racked up some big scores during the Allianz League and in their defeat to Westmeath, now in the Leinster Final, but it was their improvement in defence that did most to scupper Leitrim’s hopes as they prevented Donal Wrynn from having a major impact on this contest.

Leitrim were reduced to moments of indvidual brilliance for their scores with Fergal Clancy scoring four magnficent points and great efforts from Alan McLoughlin and Kevin Conlan keeping a determined Green & Gold in touch during a rightly entertaining first half.

But in the second half, as the rain drifted in, the game became far more cagey as Louth dedicated a defender just to watch Fergal Clancy and prevent the Glenfarne/Kiltyclogher man from dominating the way he had.

Louth were already in the driving seat when sub Conor Grimes blasted home the game’s only goal but the home team were finding it difficult to shake off a dogged Leitrim and the goal made all the difference in a tight encounter.

James Califf opened the scoring with a monster free from 55 yards in the first minute for Louth while Bevan Duffy fired over after four minutes after good Leitrim defence kept Louth at bay before a long ball into Ryan Burns created room for the score.

Kevin Conlan pointed after a good run from Shane Moran created space but Ronan Holdcroft scored a fantastic Louth effort from the corner on six minutes.

Leitrim had a sniff of a goal after a great crossfield pass found Donal Wrynn bearing down on goal but a tame shot was easily dealt with by keeper Craig Lynch.

Leitrim did draw level with two great points from play from Fergal Clancy in as many minutes but Man of the Match Padraic Smith hoisted over from 40 yards after more patient Louth play.

The next score was more direct - Smith making a flying leap to catch the ball on the wing before delivering the ball across the park for Holdcroft to grab his second of the game while another Smith catch ended with Ryan Burns firing over the bar on 16 minutes.

Again Leitrim fought back - a long clearance from defence found Fergal Clancy and a great solo run ended with an equally great point while good work from wing-back Danny Beck saw his clubmate Alan McLoughlin turn his man sharply and fire over to leave a point in it.

Fergal Clancy scored another huge point from play after a one-two with Donal Wrynn before Ryan Burns and Kevin Conlan swapped points either side of another half-chance from Leitrim, corner-back Niall Woods finding himself furthest forward as his flying leap to fist the ball saw his effort go wide.

Califf’s long range free taking saw him belt a 60 yard effort over, with a little help from the upright while Holdcroft hit a brilliant effort with the outside of his foot. The half ended with Kevin Conlan converting a 50 yard free to leave the halftime score at 0-11 to 0-8 for Louth.

With no changes to either side at the break, Louth continued where they had left off with Smith scoring a huge effort from the right wing in the first minute but Kevin Conlan replied for Leitrim from a free.

The second half was visibly tighter and tenser with light rain making handling and footing treacherous for the player. Both sides missed chances before a poor kick out was pounced upon by Louth and Smith scored another brilliant effort.

Louth then replaced the dangerous Ryan Burns with the imposing Conor Grimes and a Leitrim full-back line that had been pulled from pillar to post by the movement of the Louth forwards now had a very different threat.

The very next ball was a blow ball in and Grimes gathered, shrugged off his man with almost contemptuous ease, held off another and blasted the ball past Cathal McCrann on the near side.

That seemed to be that although Leitrim very nearly got right back into it when Danny Beck broke through on goal with only the keeper to beat but drove his shot too high and over the bar, Leitrim desperately needing a goal to stay in touch.

The remainder of the game was a dull affair that meandered listlessly to the final whistle - Grimes and Declan Byrne both added points in the space of a minute, Kevin Conlan replying with Leitrim’s last score a minute later with nearly 15 minutes still left on the clock.

Both teams made changes with Leitrim and Louth both registering misses, Leitrim’s far more wild while Louth were unlucky with a couple of close effort.

The last score of the game fell to sub Derek Maguire in added time as he put over a fine point from the right corner to seal a comfortable victory.

See Wednesday’s Leitrim Observer for analysis and reaction from Drogheda.