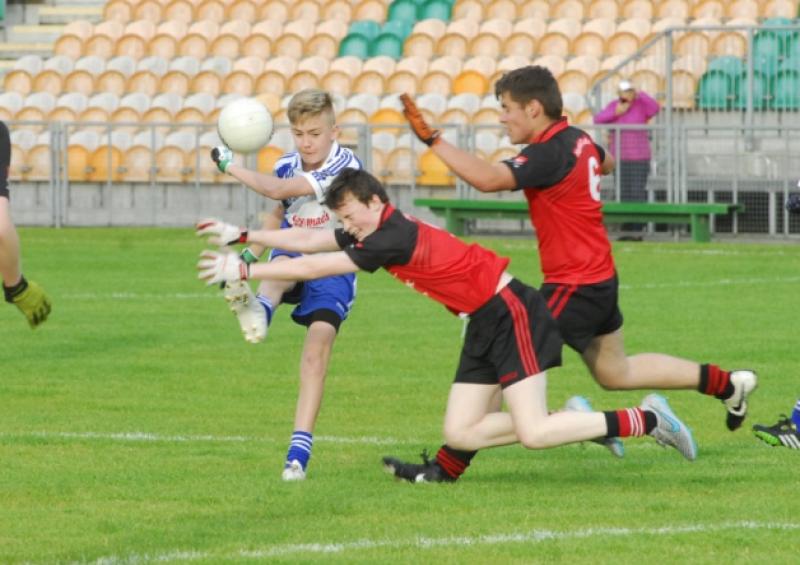 The goal threat of St. Mary’s proved to be the difference over a physically imposing Fenagh St. Caillin’s in the U14 Championship 15-a-side Final.

The goal threat of St. Mary’s proved to be the difference over a physically imposing Fenagh St. Caillin’s in the U14 Championship 15-a-side Final.

With noting between these teams, it was St. Mary’s goal-scoring threat that saw them through a tough encounter where Sam Barnes gave a great exhibition of forward play in a fiercely contested game.

With David O’Connell and Kevin Brady giving St. Mary’s a huge platform in the midle of the park and Eoghan Farrell dominant at full-back, Mary’s used their ability to strike for goals to take the verdict.

St. Caillin’s relied heavily on key players up the middle, particularly Eoin and Fergal McLoughlin, but they couldn’t match the overall scoring strength of the Carrick men.

Sam Barnes opened the scoring but three points from Conal McGovern, Fergal and Eoin McLoughlin had a more efficient Fenagh St. Caillin’s in the lead after six minutes.

However, a goal did arrive when Adam Reynolds did brilliantly to fist a David O’Connell free to the net on ten minutes. However, Fergal McLoughlin hit back for Fenagh to tie the scores but it was Curran who was in action again, making a good save to deny Oisin Bohan a certain goal.

Fenagh extended the lead with another Fergal McLoughlin free but Curran made another brilliant save to deny Sam Barnes another certain goal. The dam did eventually break when Barnes found Keaney inside the defence, a pass to Diarmuid Kelleher resulted in a great goal.

Fenagh kept fighting back, Eoin and Fergal McLoughlin both pointing frees while the Carrick keeper Sean Reynolds made two wonderful saves from the same duo to prevent certain goals. Another McLoughlin free just before halftime meant Fenagh led 0-8 to 2-1 at the break.

Mary’s had the strong wind behind them in the second half and a good run from Barnes set up Keaney for a point and three minutes in, the stand-out Barnes squeezed the ball to the net after Kelleher’s first shot was saved.

That put Mary’s three points clear but they needed Rory King to make a good block to prevent an Eoin McLoughlin goal. Adam Reynolds and Oisin Bohan extended the lead for the Carrick men with Fergal McLoughlin pulling back a free.

Eoin McLoughlin, another to impress, converted a free but a lovely chip from a tight angle from Barnes restored the gap before St. Mary’s made sure of the victory with a fourth goal, Barnes playing an incredible pass over a defender to Oisin Bohan in full flight and the corner-forward made no mistake with a great goal.

Despite two more Eoin McLoughlin points, St. Mary’s were comfortable winners as the game ended with a clutch of yellow cards for both sides.