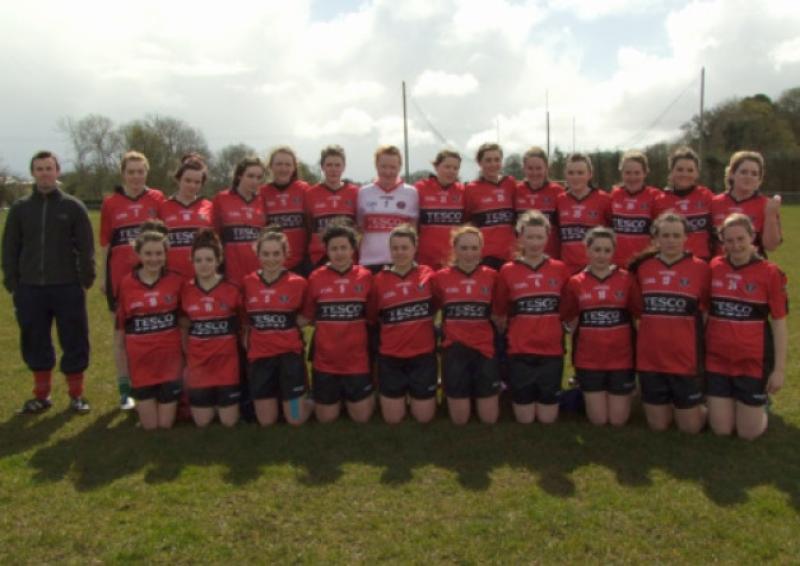 Just a day after losing an incredibly high scoring Junior Connacht Final, Mohill Community College contested the Green Farm Foods Senior C Group 2 Final against Santa Maria Louisburgh in Ballinlough but there was to be no changen in fortunes as the Leitrim school suffered more final heartbreak, this time losing by four points.

Just a day after losing an incredibly high scoring Junior Connacht Final, Mohill Community College contested the Green Farm Foods Senior C Group 2 Final against Santa Maria Louisburgh in Ballinlough but there was to be no changen in fortunes as the Leitrim school suffered more final heartbreak, this time losing by four points.

For six of the Mohill players - Aoife McGarry, Cathy Forde, Caoimhe Canning, Nicole Higgins, Claire Beirne and Lorraine Reynolds, the defeat would have been particularly hard to take as they had also played the previous evening in Hyde Park.

While arguments about the merits of players competing in two games of that significance in quick succession will surely be made, the Mohill players will know they had chances to claim victory but their failure to make full use of the wind in the opening half meant the second half was always going to be difficult for Mohill.

And that task became considerably tougher when the conditions deteriorated as the wind got stronger and hailstones pelted down on the players on Michael Glavey’s GAA pitch.

The opening stages were dominated by Mohill but a failure to convert that dominance into scores meant the only time the white flag was raised in the opening 10 minutes was when Claire Beirne took a quick free to the unmarked Nadine Hackett who duly slotted the ball between the uprights.

Despite playing the better football in the opening stages, Mohill almost found themselves behind when Louisburgh’s Nicole O’Malley saw her shot rebound off the crossbar. Initially it appeared as though the ball would go over the bar but fortunately for Mohill Sharon Reynolds was alert to the danger and managed to clear the danger and a minute later Mohill doubled their advantage when Lorraine Reynolds converted a free after a foul on Caoimhe McGuinness.

Having been on the backfoot for the majority of the game, Louisburgh struck decisively as they scored the game’s opening goal midway through the half. Nicole O’Malley released Aine O’Reilly who ran at the heart of the Mohill defence before dispatching a shot past Aoife McGarry.

Further chances came and went for Mohill before a fine team move involving Lisa Reynolds, Claire Beirne and Nadine Hackett resulted in Shauna McGrath scoring a point that meant the sides were level (0-3 to 1-0) at the interval.

With the wind at their backs, Louisburgh made a bright start to the second half and regained the lead when Deirdre McNally pointed. However, Mohill’s response was particularly impressive. After Lisa Reynolds struck for an equalising point midfielder Aileen Flynn pounced on a loose ball and dispatched her shot to the top corner of the net.

With the momentum behind them Mohilll looked to extend their lead when they were awarded a free in front of goal but Lorraine Reynolds’ effort was cleared off the line when perhaps going for a point would have been a better option.

As the weather deteriorated and Mohill were forced to play into an even stronger breeze as well as a downpour of hailstones, Louisburgh responded with their second goal as Elaine Needham’s shot looped into the goal.

Midway through the half, Aine O’Reilly caught the Mohill defence off guard as she smashed a free straight to the back of the net.

To their credit Mohill showed no sign of throwing in the towel and a fine goal from Lorraine Reynolds, dispatched to the top corner as she was turning, reduced the deficit to just two points with 13 minutes remaining.

With the Mohill players beginning to tire, Louisburgh made a final push in the hope of securing victory and five points in as many minutes meant the game looked to be now beyond Mohill. However, there was still time for Mohill to rally once more and points from Shauna McGrath and Aileen Flynn gave a glimmer of hope that victory may still be possible.

With the game almost at an end Mohill struck for their third goal of the game to leave just two points between the sides - an excellent run from Lorraine Reynolds caused panic in the Louisburgh defence. Reynolds found full-forward Shauna McGrath who instead of shooting herself, showed great awareness to find Nadine Hackett and the corner-forward made no mistake with an emphatic finish.

Trailing by two points, the question now was whether or not Mohill would have enough time to complete their comeback but Louisburgh were in no mood to let their lead slip and replied immediately with points from Aoife Gibbons and Aine O’Reilly.

To further illustrate that it was no to be their day another incisive passing move involving the full-forward line resulted in Lorraine Reynolds being presented with a sight of goal. Reynolds appeared to do everything right but she was denied by the upright and moments later the full-time whistle sounded to signal the end of Mohill’s brave challenge.