Mohill denied at the death in high scoring junior final 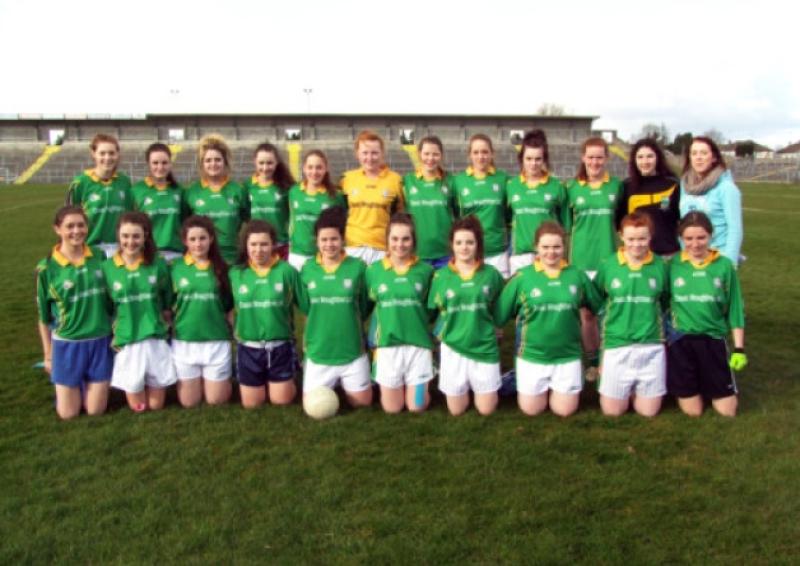 Dr Hyde Park has brought mixed success to Leitrim teams down the years but surely no team has ever contested a final in the famous venue and suffered defeat despite amassing an incredible tally of 8-19.

Dr Hyde Park has brought mixed success to Leitrim teams down the years but surely no team has ever contested a final in the famous venue and suffered defeat despite amassing an incredible tally of 8-19.

For much of the game Mohill seemed on course for victory in the Green Farm Foods Junior C Group 2 Final but in the second half a combination of playing against a strong wind and defensive naiveity meant the Leitrim school had their lead wiped out in the closing stages as they were on the receiving end of a storming comeback.

Leading by 11 points at the interval and with Dearbhaile Beirne causing all manner of problems for the St Cuans defence, it appeared as though Mohill would be strong enough to hold on for victory despite the fact that they would be playing against the wind in the second half. Lorraine Reynolds and Lorraine Moran were others who stood out for Mohill as they took full advantage of the elements during the opening 30 minutes.

While Mohill were dominant, St Cuan’s gave glimpses of their attacking potential with Emma Reaney and Ciara Naughton looking particularly dangerous when running at the Mohill defence.

However, there was one player who was operating at a level above everyone else and within 10 seconds of the game getting underway, Dearbhaile Beirne ran through the St Cuans defence and scored what would prove to be the first of 21 goals!

That good start was almost immediately cancelled out as St Cuan’s replied with a goal of their own, Emma Reaney dispatching her shot past Mohill goalkeeper Aoife McGarry and moments later they took the lead when Ciara Naughton converted a free.

Two points from Lorraine Moran (one free) and three from Beirne put the Leitrim school back in front. While they playing the better football there were plenty of warnings of the danger posed by the St Cuan’s team ensuring nothing would be taken for granted. Moments after Reaney hit the Mohill upright, the St Cuan’s captain went on another run and made no mistake as she found the Mohill goal.

The end to end nature of the game showed no sign of abating and Mohill duly extended their lead when Dearbhaile Beirne converted a penalty after Sinead Reynolds was fouled before Beirne and her opposite number, Ciara Naughton exchanged points.

Nicole Higgins, Lauren McCann, Sinead Reynolds and Caoimhe Canning saw plenty of the ball as Mohill began to turn the screw but once again it was Dearbhaile Beirne who proved to be the real threat. Not only was she finding dangerous psitions she was running through the St Cuan’s defence for fun and her shooting was proving to be incredibly accurate.

During the remainder of the half Mohill scored a further 1-10, of which 1-7 was scored by Dearbhaile Beirne while Lorraine Moran (0-2) and Sinead Reynolds (0-1) were also on target. During that period of Mohill dominance the only replies from St Cuan’s were two goals from Ciara Naughton, including a penalty with the last action of the half meaning Mohill held a commanding 3-16 to 4-2 lead at the break.

While the lead may have been convincing the strength of the breeze that St Cuan’s would have at their backs in the second half meant the game was far from over.An early Beirne point helped settle Mohill into the second half but another Ciara Naughton goal, quickly followed by an Emma Reaney point meant the Castleblakeney school were now looking to be a serious threat.

Mohill were still looking dangerous on the counter-attack as St Cuan’s struggled to cope with the threat posed by Dearbhaile Beirne who scored her fourth goal after a pass from Lorraine Moran. The pressure being exerted on the Mohill defence was such that uncharacteristic mistakes were being made and St Cuan’s duly took advantage with further goals from Naughton and Reaney.

With 20 minutes still remaining it was difficult to predict who would emerge victorious but with Mohill regaining the upper hand after two Dearbhaile Beirne goals either side of a Ciara Naughton goal it was looking good for the Leitrim school.

A point from Aoife Byrne helped the Mohill supporters find their voice once more but once again the momentum quickly changed as Emma Reaney scored three goals in the space of two minutes for St Cuan’s.

Further scores from Dearbhaile Beirne (2-0) and Lorraine Moran (0-1) for Mohill were sandwiched between yet another Ciara Naughton goal meaning that with just two minutes remaining Mohill held a slender two point lead.

Unfortunately for Mohill it was to be St Cuan’s day and they finished the game with two points from Ciara Naughton and the final point of the game from Emma Reaney as the shellshocked Mohill players began to reflect on how the game had slipped away from them.