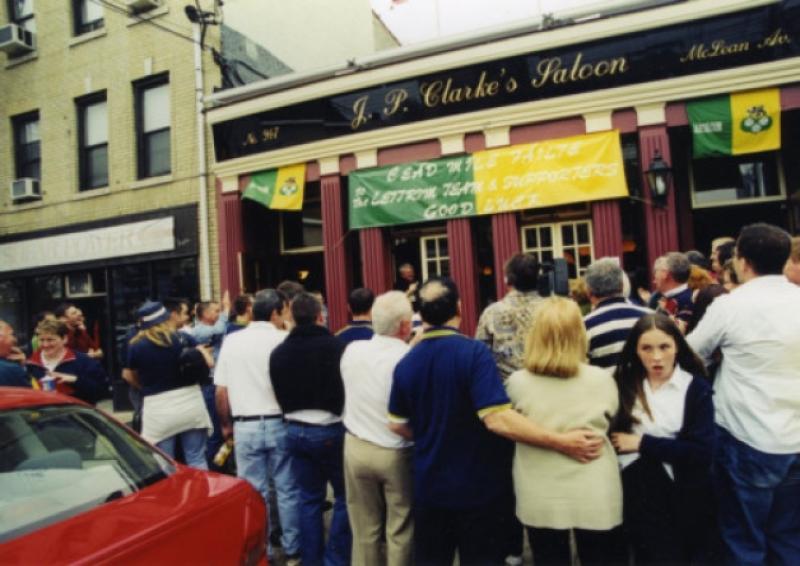 Gathering events are being staged throughout Leitrim this year to welcome back emigrants, to towns, villages and parishes to enjoy their native culture, music and sport. Well the Leitrim diaspora, particularly those from the McLean area in Yonkers, have got a head start on this process.

Gathering events are being staged throughout Leitrim this year to welcome back emigrants, to towns, villages and parishes to enjoy their native culture, music and sport. Well the Leitrim diaspora, particularly those from the McLean area in Yonkers, have got a head start on this process.

Seamus Clarke, the proprietor of JP Clarke’s, recognised a good idea when he heard it, and he has adapted the concept to coincide with the Leitrim versus New York clash on May 5. Seamus and Leitrim supporters’ committee have organised “A Leitrim Gathering to Remember” in Rory Dolan’s on McLean Avenue in Yonkers after the game.

Aside from the theme of “Meet the Team on McLean”, a great night’s entertainment is ensured with the very popular Tommy Flynn and the New York Showband. In addition there will be guest appearances by comedian Seamus O’Rourke (Carrigallen) and the popular entertainer Fergal McGill (Bornacoola), while the inimitable and outrageously comical Tommy Moran (Ballinamore) will be the M.C. for the event.

Well a few generations back many a Leitrim household made preparations for the visits of the Yanks or the Exiles. Houses were white-washed and distempered, the hedges cut and briars and nettles cleared from the laneway to make a good impression.

Now the roles are reversed as preparations are in full swing for the Leitrim team and the convoy of supporters that travel the length and breadth of Ireland and of course across the Atlantic irrespective of depressions or recessions.

Already occasional shouts of “Up Leitrim” can be heard as Leitrim flags are being hoisted, jerseys aired, box rooms de-cluttered and couches readied in basements lest an unannounced Leitrim supporter might arrive.

Hundreds of Leitrim immigrants live in the Woodlawn and Yonkers areas, which are bisected by Katonah and McLean avenues respectively. Indeed these streets look remarkably similar to any of the main streets in Leitrim towns such as Ballinamore, Mohill or Drumshanbo.

It is not unusual to find two Leitrim drivers stopped in the middle of the street to discuss the local and the latest news, often oblivious to the plight of the harried American aggressively blowing the horn to interrupt the conversion. Perhaps there is no other place in the world that has such a concentration of Leitrim people.

Many of the very successful businesses are owned and operated by Leitrim natives. Among the notable establishments are JP Clarke’s, Fagan’s, Rory Dolan’s, Behan’s, the Rambling House, Halo, and the Butcher’s Fancy. Though McKeon’s Steak House is no longer owned by Dromahair man Pat McKeon, it still has a strong Leitrim ambience.

The McLean/Woodlawn area constitutes the St. Barnabas Parish, and that is the name of the junior club that represents the area. An interesting statistic from last year’s squad was that there were 12 players with Leitrim roots, plus they were managed and trained by Leitrim personnel as well. Names such as McGovern, Redican, Deane, Flanagan, McBrien, Clarke, Brady, Whitney and Wynne were common on the team sheet.

Indeed it could have been a baker’s dozen if Mike McVann was included, after- all he is a first cousin of Glencar/Manor and Leitrim player Paddy Maguire. Even the St. Barnabas colours are the same as Leitrim’s.

The strong concentration of Leitrim exiles is further reinforced by the fact that in the circulation of the local papers, the Leitrim Observer is second only to the Kerryman in the area. While the area is often referred to as the “Emerald Mile”, a writer from the Irish Independent labeled it “Little Leitrim” a few years ago. When it comes to Leitrim football, there is nothing little about the support anticipated in Gaelic Park. Besides the Leitrim tri-state supporters, others will be travelling from Canada, Chicago, Boston and Philadelphia.

Add in the travelling contingent from Ireland, and Leitrim will have the lion’s share of the support. Games in New York are unique in the sense that it is about the only place in the world where the visiting team has more support than the local team. However each time Leitrim play here, more supporters travel from Ireland than from any of the other team.

As they say about amorous affairs absence makes the heart grow fonder, well I think that the same principle applies with the support of the county team. I discovered that first hand ten years ago as I was the trainer of the New York team that lost to Leitrim in extra time. It didn’t matter that I had been involved with New York as a manager and selector in previous years.

I was being asked very pointed questions, reminiscent of George W. Bush as he was trying to line up friends against the “axis of evil”, namely, “are you with us or against us”. Tommy Moran didn’t spare me either as he introduced me to the Leitrim manager Declan Rowley as the John Walker of Leitrim football. You see Walker’s picture was plastered across the front page of all the American papers as the most despicable and degenerate individual as he had renounced faith and fatherland to join the Taliban.

I thought Tommy was my friend, but the Cannaboe man fully buried the boot, laces, studs and muck. I was hardly safe from the ire of Leitrim fans anywhere. Indeed a parishioner, later on in the summer greeted me in Mullies church, with the salutation “you’re the so and so that was tryin to bate us”.

Anyway my exile or excommunication from Leitrim football was eventually rescinded after I showed up at a few games in Carrick, and my association with New York management ended. It wasn’t exactly exoneration for consorting or cavorting with the enemy, it was more in the line of a fool’s pardon.

Now, when I show up at New York training session, they are suspicious. I’m still involved with New York football, but it is as sportswriter for the Irish Echo. At this stage the mood in the local camp seems very positive here. Last year it was a poor team that took the field, this year the squad is considerably better. Still Leitrim should take care of business.

Barney Breen is no stranger to New York football as he won two senior championship medals with the Leitrim club in the nineties. Meanwhile the first weekend in May should be a great time for players, visitors and exiles in a New York style Gathering.

Perhaps the sequence should be, defeat, meet the team on McLean, and then there will be a “Leitrim Gathering to Remember”. I hope the New York boys don’t read this, I could be in trouble again, but thankfully not with the Leitrim supporters.