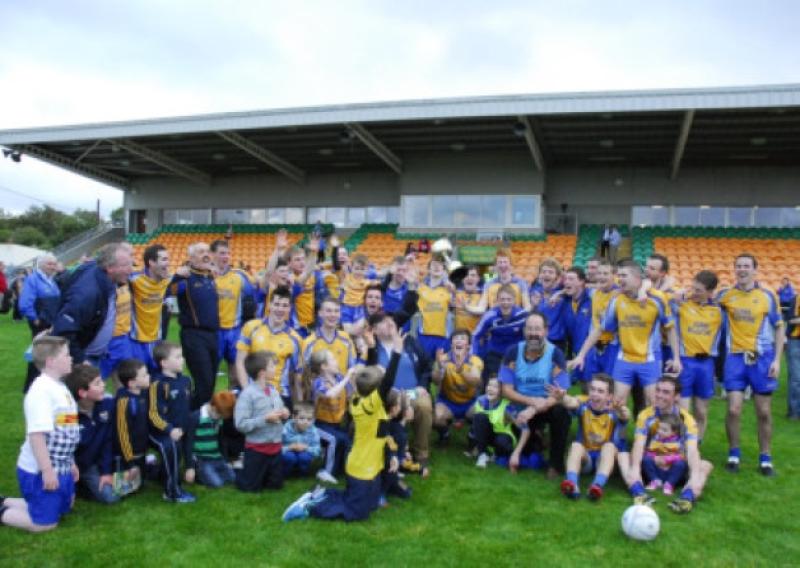 James Rooney’s goal in the dying seconds of normal time saw Glencar/Manorhamilton claim the GWP Intermediate Championship title in Ballinamore on Saturday despite an outstanding display from Eslin’s Man of the Match Conor Beirne.

James Rooney’s goal in the dying seconds of normal time saw Glencar/Manorhamilton claim the GWP Intermediate Championship title in Ballinamore on Saturday despite an outstanding display from Eslin’s Man of the Match Conor Beirne.

Summing up this encounter is difficult, not because there was a lack of action but rather just where to start!

James Rooney’s goal in the last seconds of normal time catapulted Glencar/Manorhamilton back into the lead after they kicked a succession of great chances wide and almost lost a game that they dominated for 45 minutes.

Conor Beirne delivered one of the great one-man shows of Leitrim club football as he scored Eslin’s entire 2-6 and played with the force of a tornado, blowing everything in his path out of his way.

Beirne’s two goals both came with at least three and maybe four Glencar/Manorhamilton defenders hanging out of him but the harsh, blunt truth was that Beirne didn’t get enough support from his team-mates to get Eslin across the line.

In many ways, it came down to Glencar/Manorhamilton’s team against Conor Beirne but Glencar/Manor’s greater strength of depth in all areas of the field was just too much of a hurdle to overcome.

Adrian O’Flynn, Shane Devaney and James Rooney did a tremendous job in restricting the chances Beirne got and upfront, Aaron Hickey and Conor Dolan gave the Eslin rear-guard plenty to think about.

All around the field, Glencar/Manor had leaders and when Eslin went three clear with 12 minutes to play, their impressive response saw them quitely and effectively work their way back into contention.

The game looked as if it was heading for a draw such was Manor’s growing dominance but they couldn’t find the score they needed before young James Rooney showed ice-cold nerves to drill a fantastic shot to the Eslin net.

Even then the drama wasn’t over as the north Leitrim men missed two great chances to kill off the game before Aaron Hickey, who gave an equally impressive, made an absolutely critical block on a pile-driver of a free from Conor Beirne with a matter of seconds left.

Conor Beirne got Eslin off to a good start from a free after just 45 seconds but less than three minutes in, a poor defensive Eslin pass saw Alan Hickey through to point.

Eslin had a lucky escape when Conor Dolan cracked a blistering shot off the Eslin crossbar, the ball bouncing down but not over the line. Glencar|/Manor continued to create chances but it took two Aaron Hickey points, one from a free and the other a lovely sliced fifty, to show their dominace on the scoreboard.

Eslin keeper Enda Turbitt made a solid save to stop another Dolan shot after a poor kickout was pounced upon but a lovely passing move ended with Dolan getting the score he deserved on 14 minutes with a nice chip from a tight angle.

Aaron Hickey got his third after Shane Devaney intercepted but Conor Beirne illustrated his threat when, despite being marked by four players, he somehow managed to scoop a shot over the bar.

Dolan saw another shot come off the post but Alan Hickey finished with ease but there was still danger at the other end as Conor Beirne saw a shot blocked by Shane Devaney as he bore down on goal with Beirne putting the fifty wide.

Alan Sweneey finished the scoring in the first half, playing a one-two with Conor Dolan before scoring from a tight angle to leave the halftime score at 0-7 to 0-2 in favour of Glencar/Manorhamilton.

Eslin introduced Niall Beirne at halftime but it was his brother Conor who gave Eslin a lifeline when he burst pass three defenders to bury a ferocious shot in the Manor net just a minute into the second half.

Conor Beirne put a fifty wide two minutes later but it was Glencar/Manor who continued to set the pace, Eslin’s Paul Kilcrann doing well to keep Aaron Hickey’s shot from crossing the line.

Eslin, hit back, however, with two Conor Beirne points, one a free, before Beirne pounced on a poor effort from Brian Higgins, turned and buried a shot in the Manor net to take the lead.

Two more Beirne points followed, one from a 50 yard free, the second from play after a Padraig McNulty pass but the fianl ten minutes were dominated completely by the north Leitrim men.

Colin Ryan drove over the bar to give Manor some hope with eight minutes to go before an Aaron Hickey free left just a point in it with less than five minutes to go.

Then the drama really got started - Aarron Hickey’s shot headed wide but sub Alan Sweeney managed to keep it in play, feeding the ball bck to a charging James Rooney who drilled a brilliant shot to the Eslin net.

Glencar/Manor could have sealed it but had two late wides, leaving the door open for Eslin and they almost took it. Conor Beirne was taken down and the free moved in for dissent. Beirne drove a ferocious 21 yard free at the Manor goal, the ball being blocked out for a fifty by Aaron Hickey.