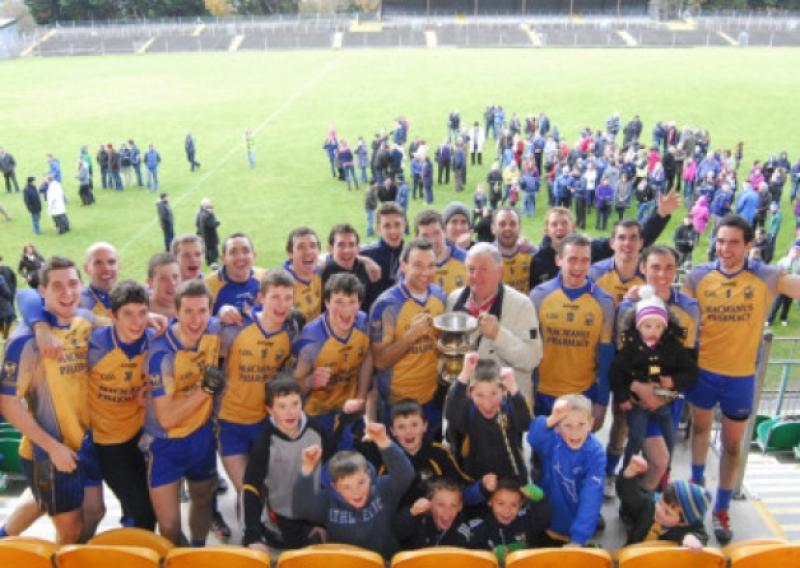 It wasn’t the trophy they wanted but Glencar/Manorhamilton ended 2013 on a high and with a measure of revenge.

It wasn’t the trophy they wanted but Glencar/Manorhamilton ended 2013 on a high and with a measure of revenge.

Mohill ended Glencar/Manorhamilton’s dreams of championship glory earlier in the summer in their march to the County Final but once again, the south Leitrim side were left empty handed.

In their championship encounter, Mohill struck for a late goal to snatch victory against a dominant Glencar/Manor but this time, the north Leitrim side rode their luck to claim the title.

For the first 20 minutes, a vibrant Mohill dominated most sectors of the game as their quick movement and clever link-up play exposed a few holes in the Manor defence.

But crucially, Mohill couldn’t build up the lead their performance deserved and with the Manor men managing to just hang in there, Mohill were ripe for a sucker punch and young Niall Brady delivered two of them before halftime.

The first saw Brady provide a wonderful cross-field pass to Evan Sweeney in space and charging through before he was taken down, James Glancy emphatically driving the spot-kick to the Mohill net on 22 minutes.

That was a killer blow for Mohill who saw a two point lead evaporate but Brady delivered a far more crushing blow as the game ticked into added time, Brady collected a long ball, rounded his man and brilliantly drilled a low shot to the net, transforming the contest.

It could have been even better as Adrian Croal blasted a close range shot over the Mohill bar early in the second half as a completely dominant Glencar/Manor stretched their lead to nine points.

But instead of collapsing, Mohill showed their resilience and fortitude as they slowly set about reducing the imposing Glencar/Manorhamilton lead.

Two points raised a little cheer but the roof was raised when Colm Beirne deftly fisted Alan McLoughlin’s cross to the net on 16 minutes, a score that ignited the contest.

And if things weren’t already a concern for Manor, it got very much worse when Gerry Hickey saw the line less than 60 seconds later, reducing Glencar/Manorhamilton to 14 men and handing Mohill yet another massive psychological boost.

Mohill set about reducing the four point gap and it seemed as if victory would be theirs when they stood just a point adrift with more than five minutes left to play as Manorhamilton’s composure deserted them under waves of renewed Mohill enthusiasm.

Crucially, Mohill never got the chance they so desperately needed to tie the game as Glencar/Manor seemed to rediscover that inner resilience and determination that has seen them win so many titles over the past six years.

Suddenly, Mohill had nowhere to go as every time the ball went into the danger area, a Glencar/Manor man emerged with the ball and the one real chance they did create, Pat Gilmartin and sub James Rooney combined to make a huge block after an interception threatened to lead to a Mohill equaliser.

It was tough on Mohill to come so close and to lose their second major Senior Final of the year but it has been a season of some promise for them, particularly with so many talented youngsters yet to emerge at Senior level.

However, they will want to win one and win one soon as plenty of teams have seen talented generations come and go without the sort of trophy haul one would have expected.

For Glencar/Manorhamilton, victory in Sunday’s Final was a great way to end a year that seemed to promise so much in the early stages of the championship and the fact that Mohill were the opposition probably added to their motivation.

Certainly, with their Intermediate Championship triumph to back them up this year, there is no shortage of talent in the north Leitrim club and if they can bring some of their young players through, like James Rooney and Niall Brady, there is no doubt that they will still be a force for the foreseeable future.

Niall Brady showed a real poacher’s talent for a score, Adrian Croal demonstrated real flashes of his ability while Aaron Hickey also reminded everyone of his talent. Pat Gilmartin was rock solid in defence as was Cian McManus.

For Mohill, Colm Beirne led the way with a strong display, Alan McLoughlin is another fine prospect for the future while Shane Quinn, Ronan Kennedy and John Mulligan showed a few glimpse of their potential.