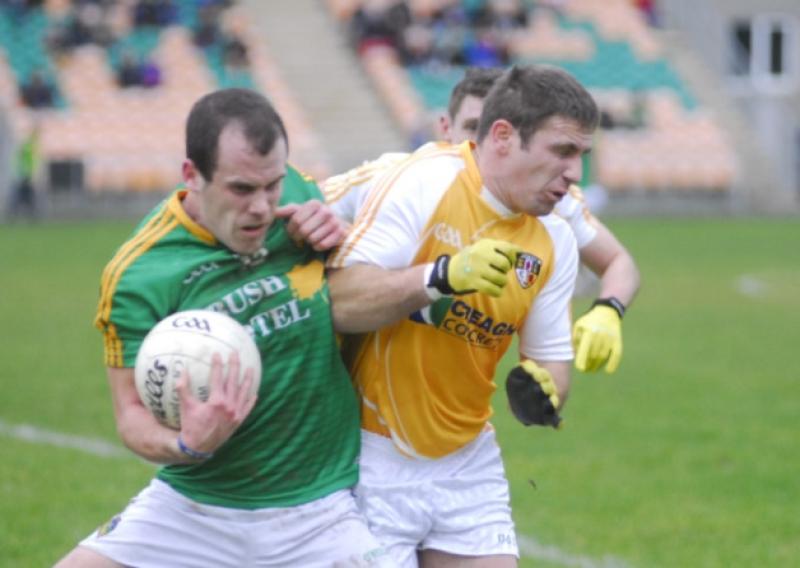 With the players and management stressing how important it is to get a good start in what promises to be a highly competitive Division Four, Leitrim accomplished that task thanks to a dominating first half performance.

That Leitrim can say it was a job done and done well was down to a supreme first half performance where Antrim and Leitrim probably shared the possession stakes but the Green & Gold gave the northerners a lesson on the effective and deadly use of possession.

Leitrim made the most of each and every opportunity and when Tomas Beirne goaled in the last minute of normal time in the first half, it was the nail in Antrim’s coffin.

It is almost immeasurable to understand what this victory will do for Leitrim’s confidence for the Saffron County were hotly tipped to make an instant return to Division Three this year.

Their hopes have taken a massive hit but Leitrim’s have grown and they travel to Ennis next Sunday with a quiet confidence and self-belief that 2014 may see them make a genuine tilt at promotion.

Antrim manager Liam Bradley made the claim that had his side taken either of their two spurned second half goal chances, they would have gone on to win the game such was their second half dominance.

But although Bradley’s claim may have some small merit, that would underestimate a wonderful defensive effort from Leitrim where the likes of Damien Moran, Aaron Hickey, Robbie Lowe, Fergal Clancy and Kevin Conlan made invaluable contributions.

Paddy Maguire quite rightly took great plaudits for his covering and leadership in the back and the marauding half-back line of Brennan, McKeon and Reynolds won many admirers for the way they pinned back Antrim.

But most of that, particularly the runs from deep of the half-backs, was made possible for the unglamorous dropping back, covering, harrying and blocks of the two midfielders and the half-forward line.

Under Hagan’s template for success, those five players are expected to work back and clog up the opposition attacking lines before springing forward in attacks. And it is a gameplan perfectly suited to the players at Leitrim’s disposal.

Ray Cox too gave a wondefully understated display, winning ball often when incredibly isolated. Along with Emlyn Mulligan, Cox covered ground, provide an outlet to his team-mates in a demanding game-plan for the full-forward line.

In truth, everyone made vital contributions at vital times to Leitrim’s victory - from Tomas Beirne’s vital goal to a stunning Cathal McCrann save and that will please Sean Hagan immensely.

He will be worried by the way Antrim dominated possession in the second half and created enough of good chances to cause Leitrim some heart-ache but a win allows him to build with a great deal of positivity.

Now it is full steam ahead for Clare, a game that will be a major statement for both teams and an intriguing context next Sunday.