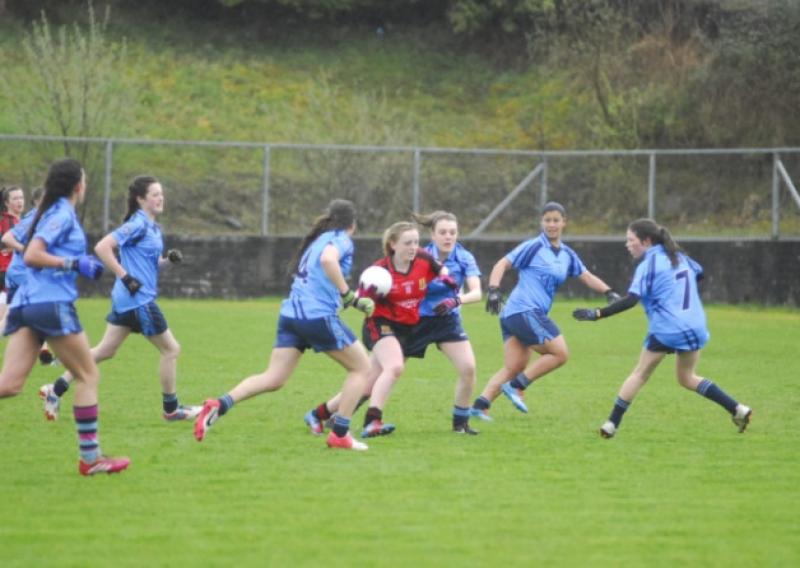 The Ballinamore players gave their all and competed valiantly throughout the game but as team manager Seamus Mullen acknowledged sometimes you have to concede the better team won.

The game began with a torrential downpour in St Phelim’s Park, Drumalee, just outside Cavan Town and from very early in the game it was evident Ballinamore had met a very strong opponent.

Eureka had a number of excellent individual performances in Cavan and the deployment of Shianne Swarres as a sweeper was something Ballinamore struggled to come terms with throughout the game.

Further up the pitch Amy Gaynor and full-forward Niamh O’Keefe proved a real handful for the Leitrim defence throughout the game and O’Keefe finished the game with a personal tally of 5-1.

From a Ballinamore point of view there were a number of noteworthy displays with centre-back Dearbhla McGovern and corner-back Keely Doonan both having fine games in defence.

Carla LaGuen and Aileen Maguire both looked dangerous when afforded space but unfortunately for Ballinamore that didn’t happen as often as they would have liked as the Eureka defence proved to be resolute throughout the game.

The game began with Ballinamore giving their large group of supporters something to cheer when Aileen Maguire converted a free after a foul on Carla LaGuen.

Unfortunately that was not to prove the start of a memorable afternoon for Ballinamore as Eureka quickly replied.

Points from Amy Gaynor and Laura Keoghan gave Eureka a fourth minute lead that they never relinquished and two minutes later they pounced for the game’s opening goal.

Niamh O’Keefe ran along the endline before cutting back and beating her marker and then dispatching her shot past Ballinamore goalkeeper Shannon O’Rourke.

An Eimear O’Neill point further extended the Eureka lead before the Ballinamore fans were celebrating a score that looked to bring them back in contention.

After a foul on Eimhin Quinn, Aileen Maguire’s floated free sailed into the Eureka goal but unfortunately as the supporters were celebrating it began to dawn on them that the goal had been disallowed.

In fairness to referee Maggie Farrelly, the whistle was clearly sounded before the ball found its way to the Eureka goal.

Clara Lynch pointed for Eureka before Aileen Maguire replied with another pointed free but Eureka dominated the remainder of the half to establish a healthy lead.

That miss was punished when points from Niamh O’Keefe and Edith Lynch further extended the lead and with eight minutes of the half remaining Eureka struck for their second goal.

Again it was Niamh O’Keefe who was tormenting the Ballinamore defence and her low shot flew into the bottom corner of the goal.

The Ballinamore players would have been hoping for the half-time whistle for an opportunity to regroup but Eureka were not yet finished with their first half scoring spree.

A Catherine Dolan point was followed by Niamh O’Keefe’s third goal of the half as Eureka led 3-7 to 0-2 at the interval.

Leitrim opened the second half scoring with an Aileen Magurie free but with the half just two minutes old Niamh O’Keefe pounced for her fourth goal of the game to all but end the game as a contest.

While they may have returned to Ballinamore without the All-Ireland title they longed for, the Ballinamore players and management deserve a lot of credit for the successful year they have enjoyed, including the manner in which they claimed the Connacht crown.