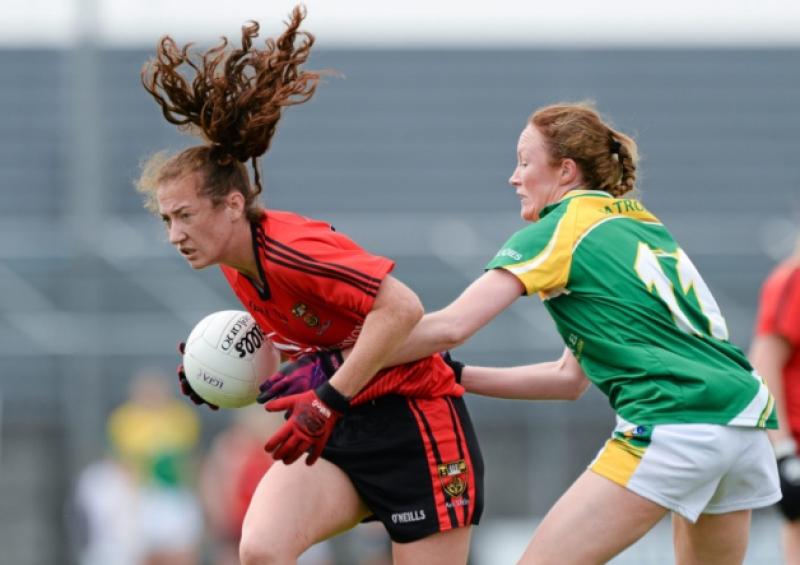 Leitrim’s players won’t have long to recover after their exploits in Mullingar as the focus turns to next Sunday’s Cox’s Steakhouse Dromod Ladies Club Championship Semi-Finals.

Leitrim’s players won’t have long to recover after their exploits in Mullingar as the focus turns to next Sunday’s Cox’s Steakhouse Dromod Ladies Club Championship Semi-Finals.

Just three of the players who saw action against Down won’t be lining out with their clubs next Sunday in the Senior and Intermediate Semi-Finals in Cloone and Leitrim Village with a couple of intriguing contests.

With defending champions Aughawillan knocked out, the title is wide open with Mohill taking on Dromahair and 2013 beaten finalists St. Joseph’s facing Kiltubrid.

The meeting of St. Joseph’s and Kiltubrid is a repeat of the final round game where Kiltubrid prevailed 0-14 to 0-9 but the Aughavas Carrigallen team had already assured themselves of a place in the semi-finals at that stage and they will be a much different proposition.

The task for Joseph’s is to stop the twin attacking threats of Aine Tighe and Michelle Guckian, the county net-minder very effective in attack in the club game, but with the Michelle & Aine Heslin, Clare Owens, Sharon Kerrigan, Fionnuala & Alanna Bohan all starters on the county senior team, St. Joseph’s would appear to be strong favourites.

The other semi-final is a tough one to call - Dromahair on their day are a real handful and Sinead Fowley gives them a real attacking pep. With Roisin Fowley so effective in attack along with Mary Farrell and Anna Conlan, Dromahair can’t be discounted.

But Mohill have a host of young talented players coming through as Caoimhe Canning, Dearbhaile Beirne, Kiara Keegan, Claire Beirne and Aileen Flynn to go with the likes of Mairead Stenson, and Deirdre Ward, Mohill would seem to ahve an edge here.

The Intermediate is equally exciting - St. Francis and Drumkeerin will be a tight batlte but the absence of Ailish Cornyn may be a big factor in this game. Drumkeerin impressed quite a lot in winning last year’s Junior title but this game may come just a little too soon for them.

The other game sees hot favourites Oughteragh Gaels take on Annaduff in a match where the Aughnasheelin and Ballinamore women are hot favourites, not only for this match but the title.

With Sarah McLoughlin & Laura O’Dowd from the county, Oughteragh have a legion of talented players behind them with Orla McWeeney, Katie Duignan, Mary McNulty & Eilish O’Dowd and they look to have too much strength for Annaduff who have Ann Marie Cox & Sarah McManus in their ranks.