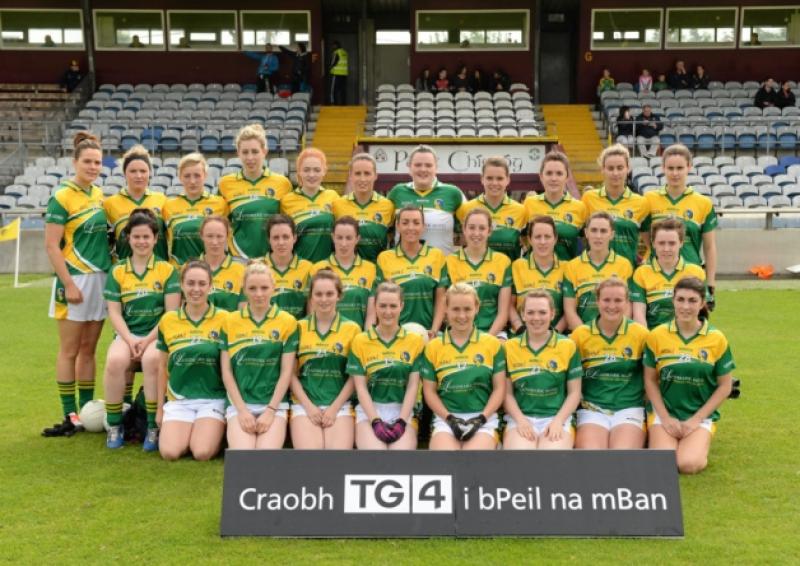 You are reluctant to use the words “what if” but Leitrim Laides must be wondering what would have happened had they performed at all during the first half as a rampant Down ran riot and looked to be in a different class altogether to the Green & Gold.

The words “what if” are haunting as Leitrim launched a fantastic last quarter fightback that cut a seven point Down lead to ribbons and could, with a tiny bit more accuracy and a slight touch of luck, have led to victory.

Clare Owens thundered a blistering shot off the Down crossbar and Roisin Fowley lifted a shot just over the crossbar when put through clear on goal as the Mourne women were rocking under the pressure of Leitrim’s intense fightback.

But Down showed just why they are favourites for the All-Ireland title as they weathered the Leitrim storm, got the game to extra-time and struck for the killer goal just 22 seconds into the first period of extra-time, a goal that ultimately decided a thrilling contest that had everything a game could want.

Leitrim displayed immense heart, great fitness and sheer pride in those final minutes to rescue a draw and the belief was that had the Green & Gold managed to get their hands on the ball in the 40 seconds after Ailbhe Clancy’s equalising score, then Leitrim would be in the All-Ireland Final.

That they aren’t is down to Down’s fantastic first half performance and the fact that Leitrim did not perform at all in the opening 30 minutes, a fact echoed by the players themselves afterwards .

And were it not for a series of fantastic saves from Michelle Guckian, two just before halftime, then any hope of a Leitrim fightback would have been consigned to the dust-bin by halftime.

Down did as they wanted in that first half, intricate and quick passing movements opening up Leitrim’s massed rear-guard time and time again, their power to break through tackles emphasising the gulf between Division 2 and Division 3 teams.

Ten unanswered points in a row, the only saving grace being Michelle Heslin’s brilliantly worked ninth minute goal that came against the run of play and was an oasis of attacking Leitrim play in the first 30 minutes.

Down’s movement was amazing, so was their power and that continued in the second half despite Leitrim having the strong wind at their backs. But the sin-binning of Aine Heslin robbed Leitrim of their momentum early in the half and Down were in complete control.

The final quarter was a blizzard of Leitrim attacks - the arrival of Ailbhe Clancy, the way the entire Leitrim team stepped up and pressurised the Down backs and the driving power of Lorraine Brennan in the middle of the park suddenly transformed a game that seemed to be heading for only one conclusion.

We can go on about ifs and buts about missed chances but when they look back on this game, Leitrim will be angry at how they allowed Down take complete control of the first period of extra-time, regaining the initiative and sinking Leitrim’s chances.

Perhaps there was a sub-conscious belief that the job was done and effort slacked off but Down played for extra-time and when it came, they were quicker to settle, quicker to react, coping quite easily with the sin-binning of one of their midfielders.

Down admitted afterwards that they did their homework on Aine Tighe and her influence was curtailed by the excellent Eliza Downey but Michelle Heslin took up the slack in spectacular fashion.

Michelle Guckian denied at least four certain goals and you got the feeling that had Down converted any of those chances during the regulation 60 minutes, they would have cruised home but Guckian has been a huge part of Leitrim’s success this year.

Lorraine Brennan did well when moved to the middle of the park, Sarah McLoughlin linked up well and the defence improved immensely in the second half after a first half battering. Clare Owens was another to stand out.

Three years ago, Leitrim lost an All-Ireland Semi-Final after extra-time but then fell back. The task for Leitrim is to build on this result, keeping this team together, with a mix of experience and youth, and trying to get back to an All-Ireland Final because the talent is definitely there.