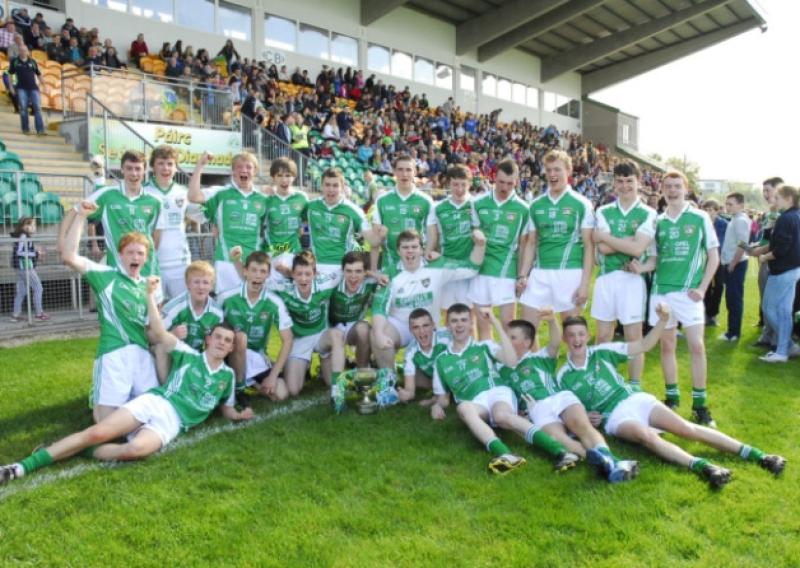 Champions St. Manchan’s and Fenagh Gortletteragh lead the way in this year’s Minor Championship 15-a-side competition as it reaches the final two games of the group stages.

Champions St. Manchan’s and Fenagh Gortletteragh lead the way in this year’s Minor Championship 15-a-side competition as it reaches the final two games of the group stages.

This year’s 15-a-side competition is providing some great entertaining football with two mouthwatering clashes this Wednesday (tonight)which will go a long way towards sending out the finalists as Fenagh/Gortletteragh play St. Felim’s in Fenagh and St. Manchan’s playing St. Brigid’s in Mohill.

Manchan’s and Fenagh Gortletteragh are top of the table but St. Felim’s and St. Brigid’s are just a point behind on four points with Glencar/Manorhamilton and Dromahair making up the six teams.

In Round 1, Fenagh/Gortletteragh easily accounted for Dromahair while St. Brigid’s got a walkover from Glencar/Manor. The game of the round St. Manchan’s beat the Aughavas/Ballinamore combination by only a point in Ballinamore.

Round 2 saw wins for St. Felim’s and St. Brigid’s over Dromahair and Glencar/Manor with the big game taking place in Gortletteragh between St. Manchan’s and Fenagh Gortletteragh. A last minute penalty converted by Ryan O’Rourke ensured a share of the spoils much to the consternation of the Mohill supporters.

Round 3 saw wins for St. Manchan’s and St. Felim’s over Glencar/Manor and Dromahair. In the St. Brigid’s, Fenagh Gortletteragh clash, a Brigid’s team backboned by Gaffney, Cullen, Plunkett and Bohan, saw them leading up to six points at half time and seemed to be coasting through a lacklustre game.

However goals from Jack Heslin and Keoghan McGovern at vital times meant Fenagh Gortletteragh surprised the home team and won by four points.

This all leads up to this week’s mouthwatering clashes: St. Manchan’s play St. Brigid’s in Mohill, Fenagh Gortletteragh play St. Felim’s in Fenagh. These two games will go a long way towards deciding who plays the curtain raiser to the Senior Final in September.

Dromhair and Glencar/Manor play each other and while they have received some beatings, it must be recognised that they are the only stand alone clubs, a great credit to both clubs.

Elsewhere in the 13-a-side competition, St. Francis and Melvin Gaels are the unbeaten front runners in their groups with three wins each while Carrigallen &Annaduff and Kiltubrid & Leitrim Gaels are battling it out for a place in the semi-finals in the coming weeks.