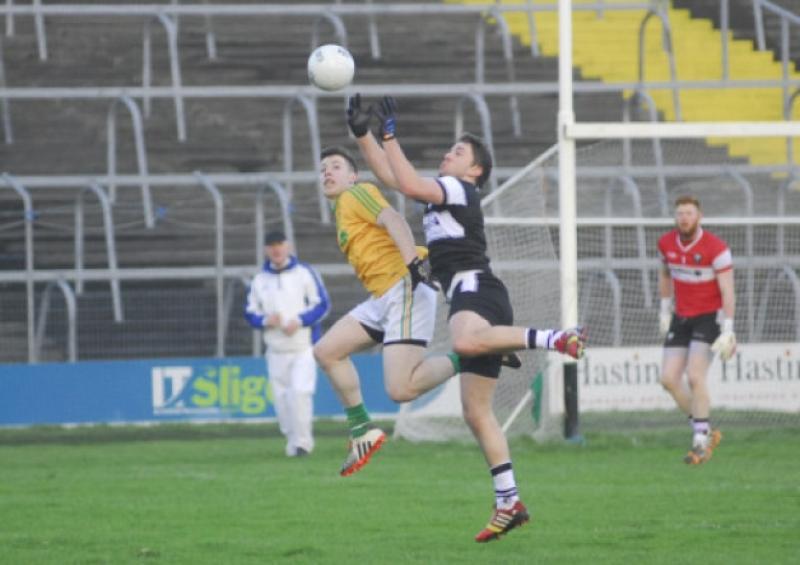 A two point defeat at the hands of Sligo may not have been how Shane Ward would have liked to conclude Leitrim’s FBD League campaign but as he pointed out after the game there were positives that could be taken from the encounter.

A two point defeat at the hands of Sligo may not have been how Shane Ward would have liked to conclude Leitrim’s FBD League campaign but as he pointed out after the game there were positives that could be taken from the encounter.

Debutants Dylan Keane and Mathew Murphy both had encouraging outings while full-forward Ronan Kennedy and Sean McWeeney, in a strong half-back line will be pleased with their afternoon’s work.

Ultimately no decision on any experimentation in Markievicz Park could definitively be said to be a success or failure. At this time of year the key is to establish a squad who become familiar with the style of play and one another.

Cathal McCrann started in midfield and while he was withdrawn in the opening stages of the second half, he displayed enough to suggest the experiment of playing him outfield as opposed to his more familiar county position of goalkeeper may yet be worth further investigation.

Leitrim began well with Kevin Conlan and Ciaran Gilheaney both threatening but it was one of the new faces, Mathew Murphy, who played a key role in the afternoon’s opening score.

He was disciplined in the tackle and having turned the ball, over set Leitrim on their way as he launched a counter-attack.

When the ball was worked up the pitch Sean McWeeney found Gilheaney who did well to slot the ball between the posts for the game’s opening score.

Before a dead leg forced Gilheaney’s withdrawl in the 11th minute, Sligo drew level with an Adrian Marren score and they took the lead in the seventh minute when he scored his second point.

Leitrim had an appeal for a penalty when Ronan Kennedy was hauled down but the tackle was adjudged to be a fair one and Leitrim had to settle for a 45, which Kevin Conlan converted to regain the lead.

The loss of Emlyn Mulligan has been eased considerably by the knowledge that they already have a free taker of Conlan’s quality within their ranks and he converted two frees midway through the half to give Leitrim a two point advantage.

Sligo hit back with a Marren free and a wonderful point from corner-forward Niall Murphy to restore parity.

With seven minutes of the half remaining Leitrim retook the lead with a Kevin Conlan free after Alan McLoughlin was fouled.

There was to be one final score in the opening half as Adrian Marren, who Leitrim struggled to contend with all afternoon, struck for an excellent score from 45 metres out.

After a competitive opening half it was expected the second half would follow a similar pattern but it proved to be a much more game after the break.

Sligo made a flying start to the half with a fine point from Mark Breheny and less than two minutes after the restart they were celebrating the game’s opening goal.

Neil Ewing did well to get the better of Sean McWeeney and he then found Pat Hughes and he dispatched his shot past Brendan Flynn.

It almost got significantly better for Sligo but Dylan Keane was on hand to make a wonderful goal line clearance to deny Marren.

To their credit Leitrim responded well after their slow start to the half and Alan McLoughlin registered their first score of the half nine minutes after the restart.

That was quickly followed by a fine goal from full forward Ronan Kennedy who expertly found the corner of the Sligo goal after Gary Reynolds did very well as he brought the ball out of defence and then delivering a telling pass towards the Mohill man.

Leitrim then hit the front with a Kevin Conlan point.

It was now Sligo’s turn to come from behind and to their credit they did just that with conviction and determination.

Two Mark Breheny points (one free) edged Sligo back in front and with nine minutes remaining they launched a counter-attack with Adrian Marren on hand to finish past Brendan Flynn.

A point from Kenneth Sweeney meant Leitrim trailed by four with five minutes remaining but there was never any sign of the Leitrim players throwing in the towel.

Two pointed frees from Kevin Conlan gave Leitrim a glimmer of hope that they may be able to salvage something from the game with a late goal but it wasn’t to be and the final score of the afternoon proved to be a Barry Prior point.