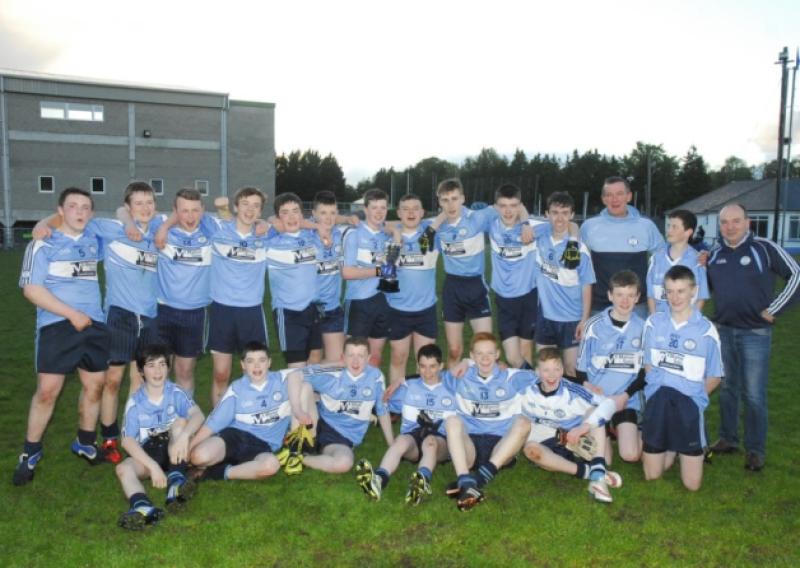 A powerful and well balanced Allen Gaels had just too much strength in depth for a young Aughavas in an entertaining U16 League 13-a-side Final last Friday in Pairc Naomh Mhuire.

A powerful and well balanced Allen Gaels had just too much strength in depth for a young Aughavas in an entertaining U16 League 13-a-side Final last Friday in Pairc Naomh Mhuire.

The Drumshanbo outfit always looked to be the better side but found it hard to put the scores on the board that would registered their superiority against a very young Aughavas who made them work every inch of the way.

However, Aughavas had no answer to the threat posed by the impressive Colin Moran whose pace and skill on the ball was a real handful while out the field, Fergal Gilmartin and Caleb Duffy gave them an edge in the middle of the park

And despite conceding a goal in the very first minute, the Allen Gaels defence stood out with Shane McGrenaghan and Aaron McCauley outstanding.

Yet Aughavas still made them work incredible with a team that contained just four true U16 players, the rest all U14s who showed great spirit and heart. Shafik Oubie, keeper Aaron Moran, Eoin Kenny, Darragh McCabe, James Canning and Niall McCabe all caught the eye.

Aughavas got the start they desperately needed when Niall McCabe showed great finishing instinct by goaling in the first minute. Allen Gaels tried to respond immediately but Caleb Duffy shot wide before Aaron McCauley drove through for a strong opening point.

Duffy then swapped points with McCabe but Allen Gaels were beginning to dominate but had four wides before Colin Moran scored a brilliant effort from the sideline from a very tight angle midway through the first half.

Moran quickly added another and Duffy put the Gaels in front five minutes from halftime with a fine point. Duffy added another point before Allen Gaels keeper Eoin Smith made a fantastic reaction save to deny James Canning a certain goal.

A goal did arrive but at the other end as Aughavas keeper Aaron Moran made a great save but couldn’t prevent Colin Moran from drilling the rebound to the net, leaving the score at 1-6 to 1-1 at the halftime break.

Darragh McCabe opened the second half scoring from a free but Allen Gaels were making their strength tell with points from Cian Beirne (2) and Moran after ten minutes. McCabe pulled back a point from a free midway through the half to leave six between the teams.

Aaron McCauley soloed through for a good point before Smith made another good save for Aughavas and then scrambled the ball clear moments later, Caleb Duffy pointing.

Aughavas kept fighting but Fergal Moran’s long shot deceived the keeper to end up in the net for the Gaels second goal. And they added a third goal when Fergal Gilmartin buried a shot in the Aughavas net two minutes from the end. It could have been worse had keeper Eoin Smith not made a couple of great saves in the closing minutes.